The more I can do, the better I feel 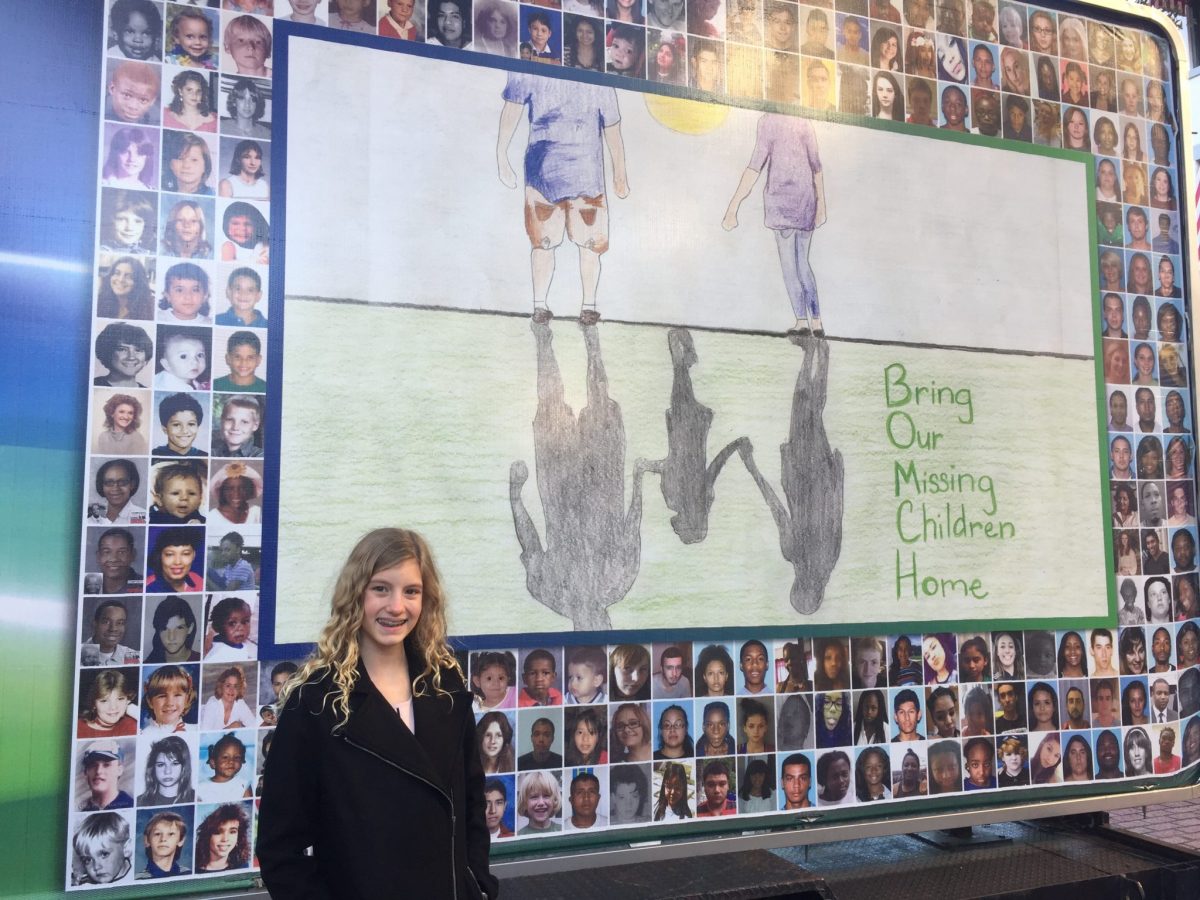 Audrey has a huge smile and an even bigger heart. The confident, compassionate 12-year old from Resurrection Catholic School in Lakeland is in the national spotlight. It all started with a poster and a passion to help find missing children.

Earlier this year, Audrey and her classmates participated in a drawing contest from the Florida Department of Law Enforcement. FDLE officials then sent her powerful design to the National Center for Missing and Exploited Children. When Audrey learned she won both the state and national contest, she was shocked. “When I came into the principal’s office, I thought I was in trouble. Did I fail a test? What did I do?” she remembered. Audrey knew it was good news when she saw the principal’s happy face, her beaming parents, and a bunch of balloons.

It’s hard not to admire Audrey’s art. Her poster shows parents holding hands with an invisible child. The missing child is then revealed in the shadows. She explained, “It’s a memory from the parents’ hearts.” That poster has since been turned into billboards across the state of Florida. Teacher, Katrena Skiles, shared, “When Audrey first handed me her poster for the contest, it truly made me gasp. The art, of course, is beautiful, but the message within the picture is chilling.”

Audrey was with her mother the first time they spotted one of her billboards in Lakeland. “It made me tear up when she showed me the poster for the first time, and I had the same response seeing it on a billboard on a busy street,” mom Andrea shared. “My hope is that it got people’s attention and pulled at their hearts the way it did mine.”

Even Tallahassee took notice. Audrey and her family traveled to the state capitol in December to meet Florida’s First Lady, Ann Scott, and Lieutenant Governor, Carlos Lopez-Cantera. The special trip in honor of Florida’s Missing Children’s Day was planned for September, but had to be rescheduled after Hurricane Irma slammed the state.

The solemn day touched Audrey’s soul. She felt moved when families of missing children were handed roses- white roses for children who were found dead, yellow roses for those who are still missing. Audrey’s father, Will, was also affected deeply. “As a parent, it is amazing to watch your child use her talents to serve a vulnerable segment of our world,” he shared. “Not many children her age are given a chance to apply their Catholic faith in the real world in such a meaningful way.”

Audrey’s win also bought her two trips to Washington, DC. She visited last spring and will return in May to honor the 2018 winner. However, her mission will not end there. Audrey’s father explains, “After returning from Washington, she developed a short presentation explaining the inspiration of her poster and sharing several ways parents and communities can keep children safe.” So far, hundreds of people across Central Florida have heard her presentation, including Kiwanis Clubs and the Board of Directors for the Lakeland Area Chamber of Commerce.

Audrey admits it makes her nervous, but she’s always ready for the next opportunity to share her story. “The more I can do, the better I feel inside knowing I helped tons of children in Florida and the U.S.,” she said.

Audrey’s parents are confident the Catholic school system is playing an instrumental role in her maturing into a well-rounded and confident young adult. “We are extremely thankful to Audrey’s entire school community for teaching her and her classmates the importance of living a life centered on Jesus,” said her father.

Resurrection Catholic School Principal, Deborah Schwope, also gets excited sharing the story of one of her students. “Audrey is a 6th grade student who applies her faith to make an impact on the world,” she said. Teacher, Cindy Stanford, echoed that sentiment saying, “She knows the importance of God, family and helping others.”

Audrey is currently raising money to give to the Department of Justice this spring. She hopes the funds will be used to create better equipment to find missing children. And the rest, she leaves up to God and our Blessed Mother. “Every night I pray ‘Hail Mary,’ so that the children who have been lost can be found,” she said.