The Pro-Life Generation Carries the Torch 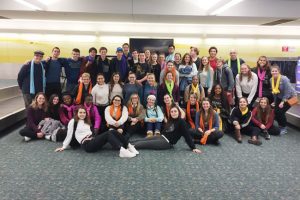 Braving cold temperatures, 55 students and faculty members from Trinity Catholic High School in Ocala made a “Pilgrimage of Life” and joined their voices with thousands of others in praying for life at the March for Life in Washington DC, Jan. 27.

“The one word I can use to describe the March is “amazing”,” said Trinity senior Gabby Mancia.  “There are so many people, young and old, fighting for life. I loved hearing all the chants and uniting as one. Our group locked arms and came together like a family. We chanted and were just joyous about life.”

Arriving at the DC Armory in the predawn darkness, some traveled as much as 10 hours to come to Washington to stand in defense of life. 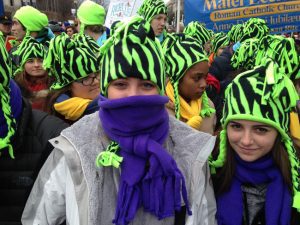 “I am here for a good cause. What is happening with abortion in this country should not be happening,” said Nathan Johnson, a high school student who traveled more than nine hours with 50 other young people from Kalamazoo, Michigan, to attend the rally.

“We are the generation who has grown up with this, and we have to be the ones to deal with it,” he added.

An additional 18,000 young people attended a similar rally and Mass at the Verizon Center in Washington. Both are sponsored by the Archdiocese of Washington. At the Verizon Center, Cardinal Donald W. Wuerl was the principal celebrant of the Mass, accompanied by Archbishop Christophe Pierre, the apostolic nuncio to the United States, along with cardinals, bishops and priests from around the country.

For the Mass at the DC Armory, Cardinal Daniel N. DiNardo of Galveston, president of the U.S. Conference of Catholic Bishops, was the principal celebrant.

“We are going to offer ourselves as an expression of the beauty of life in a throwaway culture,” the cardinal told those gathered at the Mass.

Father Shaun Foggo, a parochial vicar at St. Jude Parish in Rockville, Maryland, was the homilist.

He urged the young people to “shine the light of Christ on a very dark, lonely and scared world.”

“People are confused to think that the most precious thing in the world — a human baby — could destroy their lives or destroy their plans,” he said.

Father Foggo said it was “so awesome to see so many high school students here.” He reminded those at the Mass that they “are not too young to be called a devout Catholic.”

“There are so many people who need, or depend on, seeing the church as it really is,” he told the young people. “Be a bridge to bring those people into the church.”

Lauren Waller, a 12 grade student at Trinity found participating in the Mass at the Verizon Center to be one of the most memorable parts of the trip. “I was blown away with how many people came out to support and show their support for life,” said Waller. “It gave us the encouragement to go and tell others the importance of life and what we can do to help. That was one of the nicest and most spiritual and the closest I’ve felt to God during Mass. Everyone sang, everyone responded, I’ve never seen anything like it before.”

About 35 members of a youth group from Tennessee traveled more than 10 hours to attend the event.

“I want to speak up for the voiceless,” Kara Gilman told the Catholic Standard, newspaper of the Washington Archdiocese. “We are here to support unborn babies who are voiceless.”

Aaron Allen, a Catholic school student from New Hampshire, said he traveled all night long to attend the rally, Mass and to march.

“We want to see a change in the respect for life in our country,” he said, “and we can do that by being here and marching.”

Students from Trinity also left the experience with a renewed feeling that united they can change the world.

“You got to see people just like us here for the exact same reason, wanting to make a difference in the world and end abortion,” said Waller.

Mancia agreed, “I’ve always been in Catholic school and I’ve always known people who believed in pro-life but it’s such a small community. Seeing so many thousands of people made me think, “Wow, we can make a difference.”