The steadfast journey to Ordination 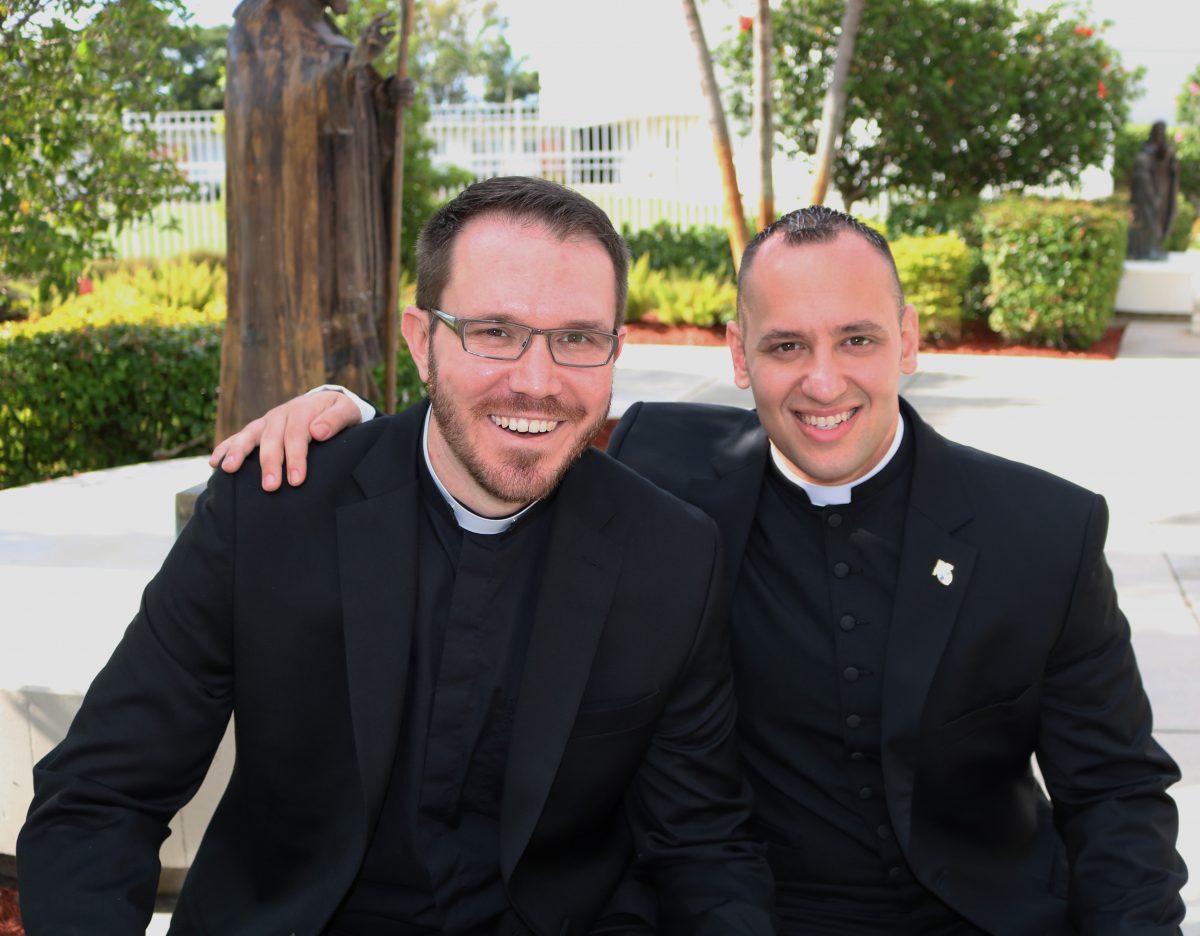 ORLANDO | Seminarians Adam Marchese and Thomas Pringle will be ordained July 25, after a two month delay due to the pandemic. As both transitional deacons await the approaching date eagerly, they share their vocation stories with the Florida Catholic.

“I knew from the time I was 10 what I wanted to do,” Deacon Marchese said. “It had nothing to do with the military or becoming a priest. I always wanted to be a chef.” The Annunciation Catholic Church (Altamonte Springs) parishioner went to culinary school and worked at the Ritz Carlton in South Florida. Although he fulfilled his dream, he was still unsettled. He noted, “There was always a better job to have. There was always a better place to live, a nicer car, more money to make. And I realized that none of that was fulfilling.”

Taking it to prayer, he asked the Lord, “How can I best serve your Church?” He felt God gently ask him to consider the priesthood. His initial reaction was “absolutely not”. Taking time to ponder and examine his life, he made his decision. “Once I finally surrendered myself to the Lord and said okay, whatever you have in store; I’m just going to trust in this—it’s as if any barricades or blocks in my life just opened up,” he recalled.

His family was faithful, but he notes he did not attend Catholic school, was not an altar server, or part of any ministry growing up. He credits a “good community of friends” and supportive parents… and the Holy Spirit. “…nothing is going to stop the Holy Spirit from calling a man if he is called. The spirit is going to continue to strive after those who he has called and that’s what happened for me,” said Deacon Marchese.

“There are times when you wonder if you can accept all those things that the Lord is asking you to do. And then you realize, you must surrender yourself and give it over to the Lord because. It is not up to me. …He wouldn’t call me; He would not ask me to do this if it wasn’t possible through me,” he added.

It was the idea of becoming a military chaplain that compelled him to embrace his priestly vocation. “That’s when I went from ‘I don’t know’ to ‘wow!’ That’s what the Lord is calling me to,” he explained. Having been part of Junior Reserve Officer’s Training Corps (JROTC) in high school and realizing that service men and women wanting to receive Sacraments often have to wait six months for a chaplain, affirmed his decision. “Who needs a pastor to guide them through these troubling times more than those who are currently serving and desiring to be fed from the Eucharist and be redeemed through Reconciliation?” Deacon Marchese said in an interview with the Florida Catholic in 2019. Persuading Bishop John Noonan took some time, but he was eventually convinced this was the seminarian’s vocation. Military chaplains must be co-sponsored by their diocese and the branch of the military they are entering. Marchese will be an Army chaplain. Once ordained to the priesthood, he will serve in the Diocese of Orlando for three years, then the Army for five years as an active duty chaplain.

During his training, Deacon Marchese recalled, “There were days out in the field where the altar was two cases of MREs (Meals Ready To Eat) and just a cloth on top and I threw my deacon’s stole on and the priest had a camouflage robe over himself and we celebrated Mass. We had to make sure that we brought everything with us; the host, the wine… to ensure that we would be able to celebrate the Sacraments.”

Hearing stories of soldiers breaking into tears when given the chance to receive Reconciliation or Holy Eucharist, Deacon Marchese told his mother he wanted to serve, “those oversees willing to fight for our country and those are the people I want to bring the Sacraments to because they don’t have the option. If there is no priest, there are no Sacraments.”

As his Ordination approaches, he becomes more certain of who He is in Christ. A recent weekend assignment caused him to look back and reflect on his Ordination as transitional deacon. He said he felt the Lord, “Just reminding me of my identity and who I am; who the Lord is calling me to be.” He added, “I feel more Adam now than I even have been. This is who I am. This is a part of me and I look forward to becoming more of that identity.”

Psalm 139 reminds Deacon Thomas Pringle of his own story. Perhaps that is why the entire Psalm is his favorite Scripture passage. Yet verse 13 carries special meaning. “You formed my inmost being; you knit me in my mother’s womb.” When his mother was pregnant with him, there were complications. “The doctor was doing some tests and he actually came back to my mom and said, you know we think that your child is going to be born with Down Syndrome and be physically deformed,” Deacon Pringle said. The doctor told her it would be “in (her) best interest” to terminate the pregnancy. His mother was devastated. Unable to go to the doctor that day, his father returned home to find his wife on the floor, crying. After talking a while, he turned to her and said, “We are going to take whatever gift God gives us.”

“This psalm really touches the very core of who I am, and it reminds me of the faith that my parents had and the great blessing that the Lord has given me by giving me the gift of life,” Deacon Pringle said. “You know, I sometimes get very emotional talking about that story and the love that my parents have for me. I wouldn’t be here today it wasn’t for their faith.”

Born and raised in Orlando at St. Charles Borromeo Parish, his mother claims she took him there when he was three days old and he never left. He came from a strong faith background, but it was his mother who handed down his cherished beliefs and accompanied him on his faith journey. “People say that it takes a village to raise a child…,” noted Pringle. “It really did in my case; it took the community of St. Charles, the whole community to really foster the vocation to the priesthood that the Lord put on my heart.”

Deacon Pringle was an altar server in third grade when he began to pay particular attention to the priest at Mass. As Pringle stood near the altar, something began to stir within him. He remembers thinking, “I could do that.” He acknowledges, “There were days that I ran from it and didn’t want to address it and didn’t want to think about it, but the Lord kept bringing me back to that vocation.”

Years passed and his vocation only grew stronger. He decided to see the vocations director, Father Miguel González, at the time. He told no one until afterward. “When I told (mom), we kinda just cried together; we hugged each other,” he recalled. “My parents have been incredible from the very beginning.”

Moved by the birth of his nephew in 2009, he struggled with his desire to be a father. Still unsure about what exactly God was asking of him, he took some time away from the seminary. His parents respected his decision. During that time, “The Lord kept inviting me to go deeper with Him,” he recalled. In 2014, he chose to return to the seminary and give it another chance.

Reflecting on his struggles and discernment, Deacon Pringle noted, “I think for any man discerning the priesthood, having the desire to be a father is a really good thing, because as a priest we are going to be fathers. That desire is a good thing, because that is what gives us the drive to be there for our people.” It is this very desire that propels him as he anticipates his Ordination.

Transitional deacons Adam Marchese and Thomas Pringle will be ordained to the Order of Priesthood, July 25, at St. James Cathedral on the Feast of St. James the Apostle, at 10 a.m.