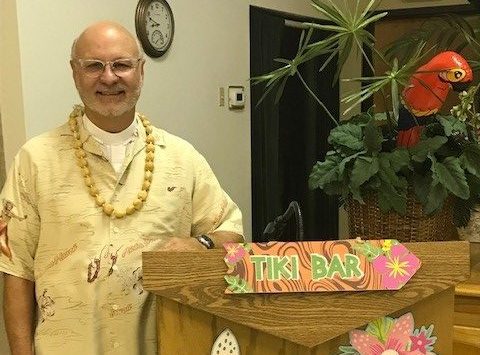 Father Ben Birinti, C.P.P.S., pastor of Immaculate Conception Parish in Melbourne, gets ready for a Tiki Time Summer School of Spirituality talk. This is the second year he offers the fun and informative summer series. (COURTESY)

MELBOURNE BEACH | For anyone hoping for an adult version of vacation bible school, Father Ben Berinti, pastor of Immaculate Conception Parish in Melbourne Beach, heard your prayer. For the second consecutive year, he presented “Tiki Time Summer School of Spirituality.”

Father Berinti presents the series on select Sundays and Monday nights throughout the summer months. On Sundays, the presentations run 50 minutes and are ideally sandwiched between the 9 a.m. and 11 a.m. Masses. “Parishioners have enjoyed wearing aloha dress to add to the fun and festivity of these gatherings,” he said. Father Berinti is no exception.

“I love providing adult formation for parishioners, and they have heartily embraced it in my two years here at ICC,” said the pastor. Between 50 and 75 parishioners attend, many returning specifically for talks despite going to Saturday Vigil or early morning Mass. “I hope parishioners are open to new experiences, new people and dimensions of this vast Catholic faith tradition of ours,” Father Berinti noted. “So often, we limit what is available to the People of God for fear that certain things might be above or beyond them, but I have found parishioners of all ages and visitors who attend from other traditions are challenged, inspired, amazed, and strengthened by the topics we share.”

Deacon Mike Biannes and his wife, Dolly, have attended nearly every event since last year. “Father Ben seems to have a knack for finding things that are obscure, that you usually don’t hear about, but are very interesting and meaningful to me,” says Deacon Mike. His wife agrees saying, “He’s (Father Berinti) so learned and informative.”

“Christ Playing in Ten Thousand Places: A Gallery of Contemporary Images,” took place July 21. The parish projection screen became a gallery of images of Jesus Christ, exploring various artists’ interpretations of Christ’s journey from Palm Sunday to His Resurrection. The images were provocative, visually and spiritually. Parishioner Judy Rohan found them “magnificent and enthralling”. She said, “The First Supper” by India Alphonso Doss, of Jesus laughing with his arm around one of the disciples was the most uplifting. “To me, that’s Jesus.” She said the talks, “make the entire parish want to learn more. When you leave, something deep inside you says, ‘I’ve got to do more, be better or make my faith fully alive.’”

The Hawaiian decorations and special treats like popcorn and tropical slushies engage the audience. “Why should kids be the only ones to have a good time at Vacation Bible School?” said Father Berinti. The final talk, “Mary Magdalene—Apostle to the Apostles: A Biblical Snapshot”, takes place on August 18.

By Glenda Meekins of the Florida Catholic August 05, 2019