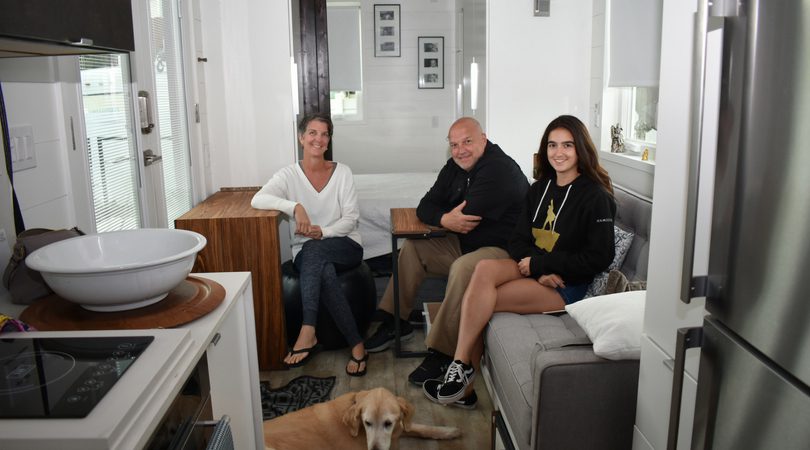 In a world where many people are racing for bigger homes, more cars, more money, more things – one Orlando Catholic school coach and his family are defying the norm and letting it all go.

David Boehm and his family moved to College Park 9 years ago and immediately downsized their home. A second move made them reevaluate even more. They chopped their living space by more than half from 2,400 s.f. to 1,000 s.f.  When they noticed rooms filling with storage after their two eldest children left home, the timing to go tiny seemed ripe.

Today the Boehms live in a new 250 square foot home and say cutting back wasn’t that hard. “I’ve always felt things are made to be used. When you amass a lot of stuff, stuff sits around a lot,” explained Boehm. His tool collection, for example, once used for building things began collecting dust. “They weren’t fulfilling their purpose (anymore). I know it seems silly, but you can extrapolate that to the way you live. There’s only a certain amount of things you need and use on a daily basis. If more people got into that mindset, there would be a lot less waste and excesses that go around.” He donated all but the basics to the drama department at Bishop Moore Catholic High School.

Although daughter, Reilly, is also headed off to college soon and will spend little time in her new loft, she embraces the change. “It’s always been about family. Family comes first. It goes the same for my brothers,” she said. “We know that we have each other, so material possessions don’t matter as much. We had a lot of stuff to get rid of, but not really as much as people would expect. Every house that I’ve lived in has gotten progressively smaller. We know we love each other and that’s what matters most.”

David’s wife, Mickie, agrees. “I think that, as a society and people, we get really bogged down with material possessions.” She works from home and thrives in a tidy space. “For me, it just weighs me down. When I’m in a more clutter-free environment, it helps me be more present, more focused, more spiritual as a whole.”

The soon-to-be empty-nesters look forward to having more time to volunteer and help the community. “That’s a big thing we felt was appealing about the whole process,” added David. “A lot of time you get stuck behind all that clutter and weighed down by all that stuff. It gives you a place to go and hide from whatever’s going on in the world and in your life.”

The Boehms continue streamlining their lives, while David remains dedicated to coaching girls’ basketball at Bishop Moore. He believes living in this more economical fashion has put them more in line with nature and the rhythms of life. “You’re more aware of the way you’re using the resources around you and that other people may have needs you weren’t aware of,” he explained.

The family is committed to lessening their footprint and much like Luke 9:3, the Boehms “take nothing for the journey.” They embark on this small adventure with open hearts for what lies ahead. “We tell the kids all the time, nothing is undoable,” said Mickie. “It’s something we wanted to try and we did. So far, so good.”

The family’s story will be featured on Tiny House Nation’s new season in September on A&E.

By Glenda Meekins of the Florida Catholic – August 8, 2018