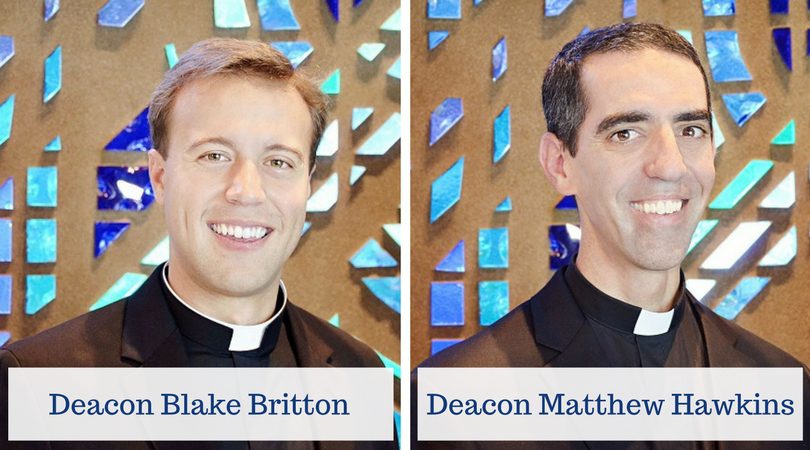 On May 26, Bishop John Noonan will ordain Deacons Matthew Hawkins and Blake Britton to the Order of Priesthood at 10 a.m. at St. James Cathedral in Orlando. The two men share their vocation stories and their journey to the priesthood. Watch the ordination live at 10 a.m. via facebook.com/orlandodiocese or live.orlandodiocese.org!

Matthew Hawkins was born in Miami, but considers himself an Orlando native. His family moved to Orlando when he was only 7 months old and has lived in the same house ever since. Describing his family as a “clash of two cultures,” he explains that his mother was raised Eastern Orthodox and his father, a member of the Assembly of God. “Very much two worlds coming together and colliding. I think they settled,” he said. “They compromised somewhere in the middle and raised my sister and me in the Presbyterian Church.” It was not until he was in college at the University of Florida that he was introduced to the Catholic Church.

“(I was) Looking for answers, looking for an identity and it just so happened in the midst of all that, in the midst of that darkness, I suppose, God introduced a friend in my life who was also going through a reversion (back to Catholicism) …he invited me to Mass one day and that was the beginning of my story,” he recalled. “I was looking for purpose. I was looking for an ideal by which to live,” he added. Although his relationship with Catholicism was “not love at first sight,” he persisted amidst his confusion with the liturgy and its mystifying rituals.

“…eventually that ideal that I was searching for began to take form. He had a face, He had a name. It was Christ that I had always been searching for… and I knew I wanted to give my life totally to it, in service to the people and living always in the presence of God,” said Hawkins.

He explained his greatest struggle was everything was new to him. He barely understood it himself, let alone could find words to explain it to his family. Out of respect for his parents and their commitment to putting him through college, he graduated and went to work as an engineer for almost seven years. Living in Dallas, he learned to defend the faith and understand how to live faithfully in the world. He loved his job, the people he worked with and the city, but ultimately left it all, including the woman he was dating and thought he might marry. He admits that it was difficult, but felt God was calling him “….to give Him an undivided heart.”

His discernment took him to St. Vincent de Paul Regional Seminary in Boynton Beach by way of a Franciscan community, which he had considered. However, the Lord was calling him, “…towards the people, their families and their daily lives—walking with them throughout the journey from Baptism to Marriage to their daily sustenance in the Eucharist and Confession and ultimately laying them to rest in funerals and Anointing of the Sick.”

He looks forward to the first time he elevates the Eucharist and to Confessions. “For many years I’ve been accompanying people to the door of Confession,” he explained. “Watching them approach that door with a sense of burden or heaviness because of their wounds, seeing them come out of the door with a sense of levity, just floating on the air after being freed from those sins.” Hawkins said he is eager, “… to be that instrument of God’s grace, His mercy, to free them and to see the joy that God has made us for…”

Although his family struggled to understand his calling at first, his parents and sister fully support him. Hawkins is quick to note the joy they are taking in the preparations and how far they have all come since he first shared news of his vocation. He is thankful for their love and the support of his community, Annunciation Parish in Altamonte Springs.

Blake Britton was born and raised in the Kissimmee/St. Cloud area. His mother Lydia’s Puerto Rican heritage has played a large part in his upbringing as well as her love of music. His father was raised in the Assembly of God faith, but agreed to raise his children Catholic—a lesson that taught him the importance of respecting everyone’s beliefs.

His mother began giving him voice lessons at the age of 8 and training him in music. “It’s remained a mainstay throughout my entire life and my entire vocation,” said Britton. “Any time I had difficulty in my spiritual life or even in my seminary journey, it was beautiful to be able to turn to this gift of music the Lord had given me to really glorify Him and as a means of communion with him…”

The first time he remembers saying he wanted to become a priest was when he was 12 years old. “I went to St. Thomas Aquinas Catholic School so there was Monsignor Fabian (Gimeno) at the time who was the pastor. Seeing him give Communion to the children, seeing him consecrate the Eucharist, something in my 12-year-old mind told me that was what I was made for,” said Britton. His paternal grandmother remembers him talking about it as early as age 5. “I feel absolutely overwhelmed with joy and thanksgiving that the Lord allowed me at the young age to know what He created me for,” he added.

His mother, who had consecrated him in her womb to the Blessed Mother, was overjoyed at his announcement. His father, who was not Catholic at the time, was slightly more apprehensive. Britton said, “When I was younger, maybe around 14 years old, I heard my father asking me whether I really wanted to become a priest, whether that would make me really happy. He said, ‘Son, you are choosing a very difficult life to live, giving your life to God and choosing to be a priest.’ I remember, this was the Holy Spirit, but I look back and I said, ‘No Dad, actually, the most difficult life to live is the one that doesn’t belong to God.’ And he remembered that all those years later. I remember after he came into the Church he told me that was one of the turning moments, that little conversation, and he mentions that to others now who may be on the fence of coming into the Church. …He later shared with me that this was a huge part of his conversion process—seeing how devoted I was to my vocation and the fact that, if a child can be that devoted to Christ in the Catholic Church, then there has to be something true in the Catholic Church.” His father became Catholic a few years later, when Britton was a teenager in high school.

He credits his father’s unconditional love and willingness to sacrifice for his family, with the way he sees God as Father. “There’s one memory I have in particular with my father, and this was before his conversion, it just speaks to the importance of fathers and vocation,” explained Britton. “When I was a little boy, my father called me over to sit with him on the couch. My father is a construction worker so his hands are very wounded from all these years of heavy lifting and heavy construction. I remember him sitting me next to him and he said, ‘Son, show me your hands.’ And I showed him my hands, which of course were smooth and he showed me his hands which were rough. And he said, ‘My hands look like this so your hands can look like that. And this is what a real father does for his family. He sacrifices everything for his wife and his children.’

“That has become one of my mottos for priesthood,” noted Britton. “I want to be a priest whose hands are wounded for the sake of my bride and my children – the Church, because that’s what a father does for his family.”