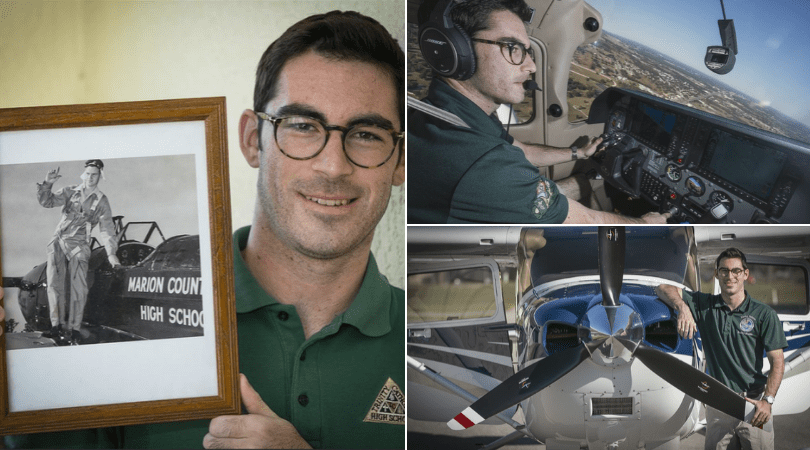 OCALA | “I’ve always had a fascination with pretty much anything with a motor,” said Camp Clifford, the 18-year-old senior at Trinity Catholic High School in Ocala. He will be the second student in Florida history to receive an FAA commercial pilot’s license while still in high school. The first to do so was Gid Townsend, more than 70 years ago, in 1948.

Clifford recalls, “I started out really young (age 3) flying remote control planes. It was kind of always understood as I was growing up that I was going to get my pilot’s license. That’s how it started.” Born and raised in Ocala, both grandfathers are pilots and shared with him their love of flying.

Taking his first flight at age 7 with neighbor Laurie Yonge Jr., son of the famed Mr. Aviator, Clifford flew as co-pilot of the Lake LA4, controlling the airplane. “I do love aviation,” noted Clifford. “That first flight on my seventh birthday gave me the aviation bug.” He continued to fly over the years in his grandfather Dan Patrick (D.P.) Clifford’s Ercoupe and logged 65 hours of flight time by his enrollment at Trinity Catholic High School in Ocala.

The dual enrollment Embry-Riddle Aeronautical University (ERAU) program came to Trinity Catholic in January 2016, his freshman year, thanks to ERAU adjunct professor John Edsall, a teacher at Trinity Catholic. The program is through ERAU’s Gaetz Aerospace Institute. Edsall sought to implement the program for eight years. “When I finally turned it over to God – He led me to Trinity Catholic…,” said Edsall. After meeting with then president, David McKenzie and Lou Pereira (principal), Edsall said, “They couldn’t wait to get started. They had both been praying for a STEM program like mine to add to the curriculum. I give God the glory for this program and leading students like Camp to seek me out. I have been blessed by the Father because I was clearly not going to get it done by myself.”

Clifford was taking Edsall’s programming course and would often be looking at airplanes during class. The aviation program had just begun. Based on his logged hours and desire to obtain his license as soon as possible, Edsall allowed him to enroll in the Embry-Riddle ground school course as a sophomore.

Edsall says, Camp’s history of flying and his earliest memories of aircraft and flying reminded him of a study done in the 1970s by the U.S. Navy on demographics shared by pilots who were successful in their flight training program and Naval careers. “Camp displayed several of the common indicators of a successful career pilot – first born, earliest vivid memory of aircraft between the ages of 3-9, early driving experiences (prior to age 13)… I was convinced he could be successful if he was encouraged and the door was opened to begin his journey to earn the ratings needed to become an airline pilot,” said Edsall.

“I do love flying and everything about aviation, but it’s mostly always been the whole fascination with cars, boats and airplanes that got me to do it,” says Clifford. “I’ve always loved being at the controls of an airplane. Even an RC (remote control) airplane or a real airplane.”

Because of the government furlough, Clifford’s final check ride for his commercial pilot’s license was pushed back to April 4 at Ocala International Aviation Flight School. He currently holds a private pilot’s license, a single instrument rating and a single engine sea and land rating. Upon completion of his final check ride, he will pursue his flight instructor certification which will assist him in completing the 1,500 hours required to become a commercial airline pilot, his ultimate goal. He received a Golden Eagle Scholarship for ERAU, which covers almost his entire tuition, helping him succeed. He will major in Aviation Business Management.

In his leisure time, Clifford dreams of flying a TBM 930, the fastest single engine turbo prop plane you can buy. He describes it as “a sports car in the sky.” But for now, he says he will be satisfied with a career as a commercial pilot.

“To be behind the controls is a lot,” he admits. “It’s really exhilarating, especially at the beginning. It’s this feeling of being in a big piece of metal, hurtling through the sky at over 100 miles an hour.

“I do believe this is definitely God’s niche for me— that He picked out. It’s probably His plan for me so I’m gonna stick to it.”