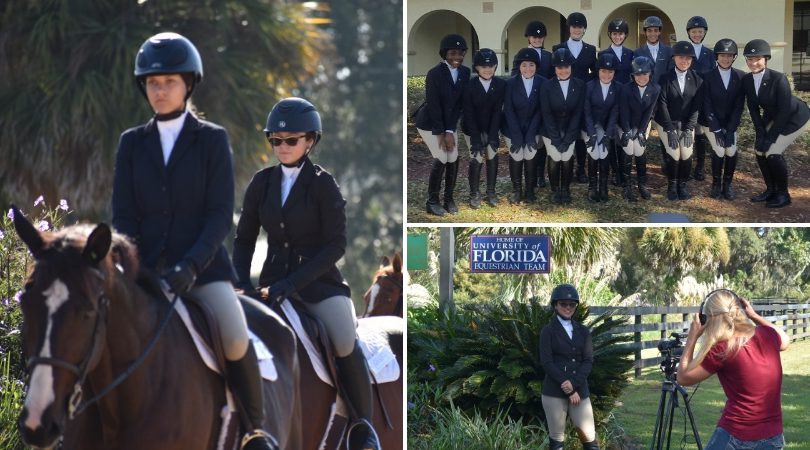 OCALA | In a city known as the “Horse Capital of the World”, there is only one high school equestrian team and it is at Trinity Catholic High School in Ocala. This unique factor drew Sean Kaplan, executive producer of the new Horse Capital TV network, to want to feature the team in a segment on his internet channel in early October.

Trinity Catholic High School president Lou Pereira said, “It’s a big deal.” For a 4-year-old program, “It means a lot to us to get the recognition.” This will be the first educational equestrian story Kaplan will cover with host Barbara Dawson.

This year, three students form the team that competes in the Interscholastic Equestrian Association, a national organization that engages new and skilled riders in competition. TCHS riders train at Kimberden Farm under the direction of Kim Burnette in Zone 4 (Alabama, Florida, Georgia, Mississippi, South Carolina and Tennessee). Burnette is also the trainer for the University of Florida Equestrian Team.

“The program has attracted students to our school that are specifically training for equestrian events,” said Pereira. “Kimberden Farm and Kim Burnette have been incredible partners, helping us find ways to defray the cost so that students who might not otherwise be able to afford getting involved in equitation, have a way to do that.”

The partnership actually began in 2014 when former school president David McKenzie was approached by students wanting a school team. Surprised that the county did not have any other high schools offering a riding program, Burnette explained, “It takes a huge facility to accommodate a good size program. Kimberden has 40-50 horses used just for our riding programs.”

Last year the team qualified for regionals for the first time. On filming day for Horse Capital TV, the three students competing earned Reserve Champion High Point Team—an amazing feat as they had riders in only three of four divisions.

Mary S. has been riding horses since 3rd grade and this is her second year on the TCHS Equestrian Team. The junior has her own horses, but Mary says being on a team adds another dimension to the sport. “It helps me get to know other people and it also gives me the aspect of participating, not against others, but with them.”

Brianna S. first got on a horse at age 3. The prohibitive cost has prevented her from owning her own horse, so she is particularly grateful for programs like these and for the opportunity to be part of IEA which procures sponsors and holds fundraisers to defray the cost of classes and competition fees.

At age 14, the freshman competes in hunt seat, the team specialty. Although she began showing horses at 5 years old, she was attracted to the team because of the Kimberden Farm facility, the team members’ kindness and the support offered through IEA.

IEA riders don’t know what horse they will get in competition and that experience translates to success in the ring, says Brianna. “It’s good to get a feel of what other horses have to bring to you and teach you as a rider. It’s definitely taught me about courage and about what it is to move forward. You can always count on going there and having people cheer you on. Riding horses gives me confidence and helps me connect with God more because I always say a little prayer before I get on.”

Pereira says the sport makes the school attractive to students and families, but more importantly, “It’s the heritage of Marion County and a lot of the people who helped make Trinity Catholic a reality 20 years ago are in the horse industry. So it was a very natural fit for us and we are very proud of it. This program has brought students to Trinity Catholic that might not otherwise have been here. That has given us an opportunity to evangelize and to help them grow in their faith.”

The program also facilitates an avenue to scholarship opportunities at universities and prepares students for the intercollegiate level competition, something Brianna is aiming for.

Monica Rojas, Brianna’s mom, says being on the TCHS Equestrian Team made “a big difference.” Having the sport incorporated as part of the school’s sports curriculum has helped their tight schedule and Brianna’s self-confidence. Rojas said, before TCHS, “It was every man for himself. With the TCHS team riding, it’s bonding, building, it’s growing together – making sure everybody does well together. And it’s important to do things outside of yourself and to help others, to be courteous and gracious with other people, even when you’re competing for the same thing.”

The TCHS Equestrian Team segment will air on HorseCapitalTV.com in early October.

By Glenda Meekins of the Florida Catholic – September 25, 2018