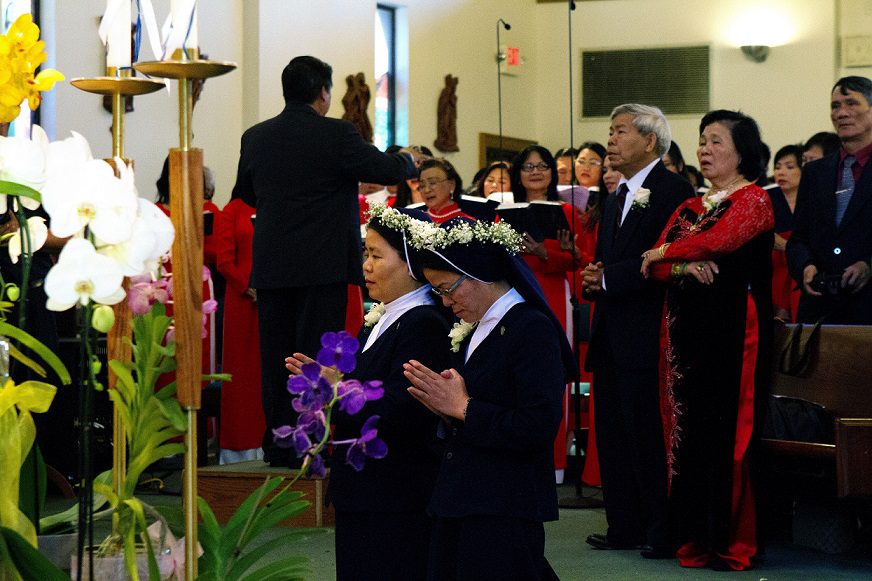 Sister Theresa Nguyen and Sister Anna Kim-Chi Ho profess their final vows to the community of Incarnatio-Consacratio-Missio whose charism is to live in the world serving God as the incarnation of Jesus, consecrated to His mission of service and love. (DUY LINH | COURTESY)

Their community was founded by Father Michael Viet Anh from North Vietnam in 1949. Despite the casualties and stress of war in the country, the community grew through its charism of sending men and women into the world to be Christ (incarnation) to the poor and serving God’s people (consecration and mission) according to their talents.

As Communism entered Vietnam, it caused many to flee to South Vietnam and eventually the United States. Although most of the congregation remains in Vietnam, some groups serve in New Orleans, Baton Rouge, Houston and Orlando, where now seven sisters serve God and live out their vocation.

The unique charism of the community is what attracted the sisters. Sister Theresa said, “I love the charism of this community and wished to be able to be a part of its mission.”  Sister Anna agreed. “I want to be closer to God and offer my life to God in service of God’s people,” she said. “I feel the community’s charism is close to what my heart wishes.”

Both women teach religious education in St. Philip Phan Van Minh Parish and teach the Vietnamese language. They also assist with the Vietnamese Eucharistic Youth Movement, a non-profit organization whose aim is to teach youth to be virtuous people and good Christians.

Sister Theresa said, “I look forward to serving people in different parishes, especially to help people experience God in their lives.” Sister Anna “looks forward to being a good nun, being close to God, and helping the needy, especially old people and little children.”

Service to the poor is at the heart of both Sisters response to God’s call, both physically and spiritually, and extends to non-believers. They hope to do this through their presence and in whatever means God chooses.