U.S. Bishops to gather with Pope Francis for 7 days of prayer and reflection Jan 2-8 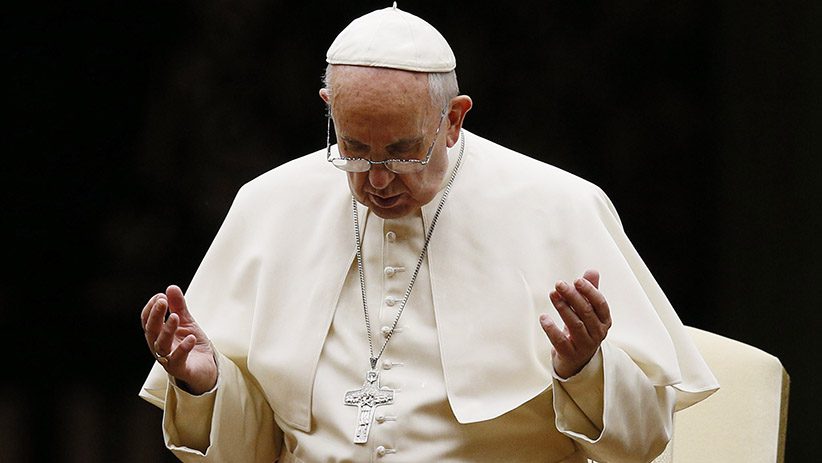 Pope Francis prays during a prayer vigil for the Synod of Bishops on the family in St. Peter’s Square at the Vatican Oct. 3. (CNS/Paul Haring) See POPE-SYNOD-MASS Oct. 4, 2015.

WASHINGTON— Catholic bishops from across the United States will begin the new year taking part in a spiritual retreat for seven days at Mundelein Seminary January 2 to 8, 2019. Preacher to the Papal Household, Capuchin Friar Father Raniero Cantalamessa, O.F.M. Cap., will direct the retreat under the theme of “He appointed Twelve, to be with Him and to Send Out to Preach” based on Mark 3:14. The retreat is taking place at the invitation of Pope Francis who has asked all bishops in the United States to pause in prayer as the Church seeks to respond to the signs of the times.

The structure of the retreat will emphasize quiet reflection, including silent meal times, and will offer daily Mass, time for personal and communal prayer before the Blessed Sacrament, vespers, and an opportunity for confession. The next business meeting of the United States Conference of Catholic Bishops is scheduled for June 2019. No ordinary business will be conducted at the January retreat.

Cardinal DiNardo expresses his gratitude to Pope Francis for offering the services of his personal preacher for the retreat and offers special thanks to Cardinal Blase Cupich for hosting the retreat in the Archdiocese of Chicago.  The Cardinal is also asking the faithful to join in prayer for the U.S. bishops throughout the duration of the retreat.

“I am grateful to the Holy Father for calling the bishops and me to step back and enter into this focused time of listening to God as we respond to the intense matters before us in the weeks and months ahead.  I also humbly ask the laity, our priests and religious for your prayers for my brother bishops and me as we join in solidarity to seek wisdom and guidance from the Holy Spirit. Pray also for the survivors of sexual abuse that their suffering may serve to strengthen us all for the hard task of rooting out a terrible evil from our Church and our society so that such suffering is never multiplied.”

On February 21-24, 2019, Cardinal DiNardo will join presidents of the world’s bishops’ conferences for a Vatican summit on the clerical sex abuse crisis and child protection. The pope had announced in September that he was calling all the presidents of bishop’s conferences, the heads of the Eastern Catholic churches and representatives of the leadership groups of men and women religious orders to the Vatican to address the crisis.

Father Cantalamessa was appointed the Preacher to the Papal Household by Pope John Paul II in 1980.  He has remained in this position through the pontificates of Pope Benedict XVI and Pope Francis and is the only person allowed to preach to the Pope.

Mundelein Seminary, located on the campus of the University of St. Mary of the Lake, is the principal seminary and school of theology for the formation of priests in the Roman Catholic Archdiocese of Chicago. It is the largest Catholic seminary in the United States and home to 200 seminarians from 34 dioceses across the country and around the world.