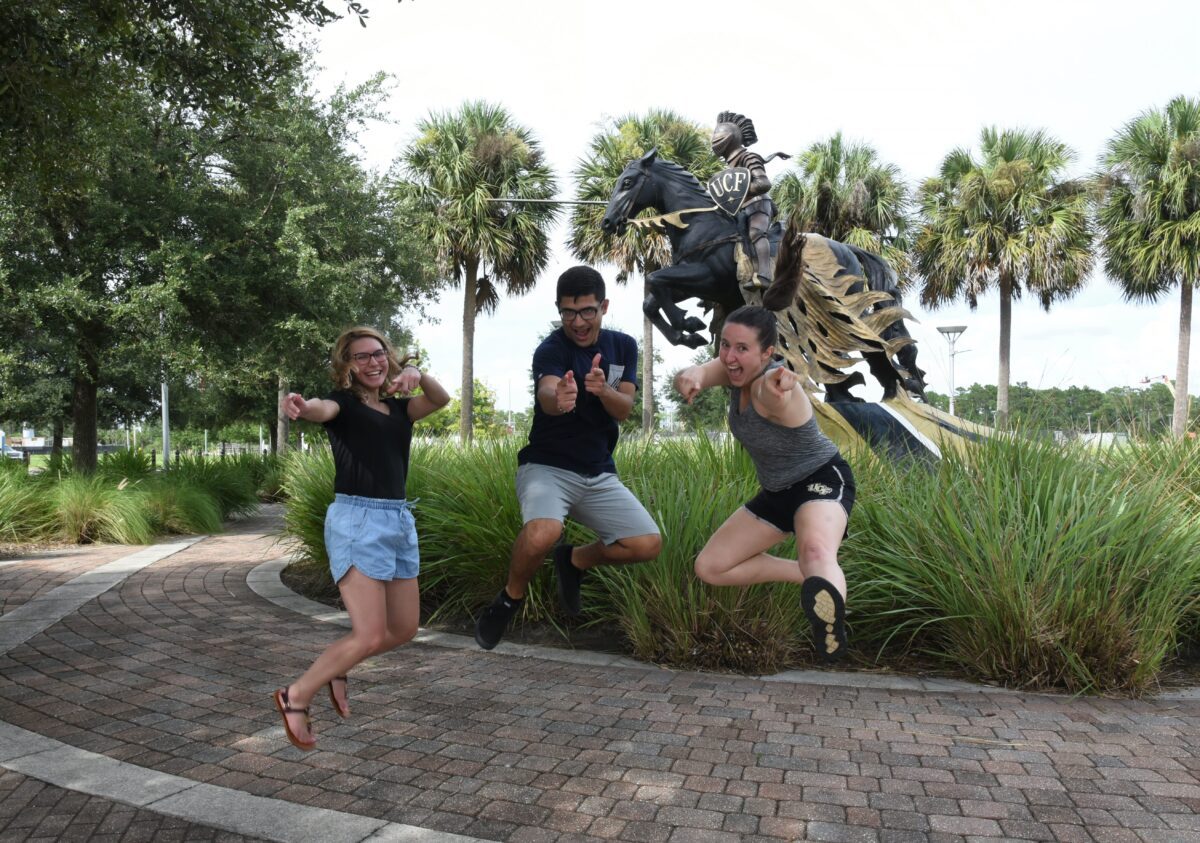 ORLANDO | None of them expected to be where they are today. All were drawn by the love St. Paul’s Outreach missionaries reflected. When Rebecca Laing looks back on the past six years, she says, “It feels very full circle.” The 2019 University of Central Florida graduate joins two other UCF attendees this year, serving their alma mater as SPO missionaries working with the Brotherhood of Hope and Catholic Campus Ministry. Veronica Riordan graduated this summer and Josué Reyes Díaz graduates soon. Each bring their specific gifts to the ministry.

Coming from nearby Brooksville, Laing sought out Sunday Mass and began attending Most Precious Blood Parish in Oviedo with her grandmother, Connie Costa. Costa learned about CCM Mass and Meal – where a local parish cooks for college students after worship. Laing was on board for “free food”. There she met an SPO missionary and other student leaders. “I encountered a group of people who remembered my name and wanted to get to know me simply for who I was.” She said it was “a huge gift” as a college freshman at one of the largest universities in the country. “It was a great gift to have a place to call home and a people to call family.” She said witnessing the missionaries at work “as they pursued me and walked with me in my faith” made her “want to give back.” Upon graduation, she served two years, the length of commitment required to be a missionary, in Boston.

“The Lord quickly revealed He wanted me to continue being a missionary with SPO,” she said. But where? Then the chapter leader position at UCF opened. “The Lord very clearly made the path for me to come back to Orlando and put a desire on my heart to be back at my spiritual home, closer to my family.”

For Riordan and Reyes Díaz their introduction to SPO came later. Riordan arrived at UCF in her junior year as a transfer student studying psychology. She met Maddie Ternyik, her current SPO supervisor at a KnightFire, a weekly event hosted by Catholic Campus Ministry for fellowship and dialogue about the faith. When she introduced herself as a missionary, Riordan’s response was, “What’s that?” She didn’t get involved in leadership until her last year when she joined SPO’s formation community – made up of household members and upperclassmen leaders desiring to delve deeper into Catholic formation. It was a place to be fed, rather than serve, a place to refuel. “It was cool to experience their way of life,” she recalled, and she wanted to be a part of it.

Raised Catholic, she admits she often went to Mass out of obligation. “Until I came here,” she said. “I realized I could have a personal relationship with the Lord, and it has changed my life.” Then she felt the Lord call her to missionary work. “I remember the first time hearing the voice of the Lord. It wasn’t an audible voice, but I just knew,” she noted. He said, “Love others. Love boldly and courageously. Don’t be afraid.” A naturally compassionate person, she knew she would put her whole heart into it. God reassured her He would take care of it.

She is serving SPO as regional development assistant for Florida. “I want to allow this opportunity for other students to have a place to call home, a community, people to love them well,” she said. In this Year of Eucharistic Revival, she hopes to shine a light on Christ. “We are Jesus’ hands and feet and heart,” she said. “I pray about that a lot… I pray for the grace to be able to pour into them as He would. It’s not about us on mission. It’s about Him on mission.”

Reyes Díaz, who graduates from civil engineering in December, agrees. “This work that we are about is not just a symbol. There is genuine joy and truth that exists within this work. Like the Eucharist, it is a sacrifice. The living God exists within this work and He wants to work through us. The Eucharist itself is a way for us to be in union with God in a physical sense. And this mission is a way for us to be working alongside Jesus. This is a way to experience God in a very real way.”

The All Souls parishioner spent his first two years going home to Sanford for the weekend to participate in the Mass with family. He didn’t even learn about SPO until he took a summer internship at Florida State University. To please his mom, he participated in the celebration of daily Mass. Never living far from home, he felt Mass would give him a connection to family. “The initial call came from, in that loneliness, realizing what I needed was community. In those encounters, I discovered my faith isn’t just for myself. It is something that should and needs to be shared with other people.”

He thought of joining his uncle, a missionary priest in Brazil. “It became a decision of, do I go and serve those who are physically poor or the spiritual poverty that is overtaking college campuses?” he said. “Both are equally important, but in my mind, because of the personal impact and consequences of the first world country in which we live, what’s happening on college campuses has greater consequences in the Church, the world, and humanity.”

Director of Catholic Campus Ministry, Brother Adam Neri, BH, noted, “All three of these SPO missionaries bring their love and passion for UCF, but more importantly they bring their love and passion for the Lord and for reaching students, shaped by their training and formation. These missionaries embody our successful partnership between the Diocese of Orlando, the Brotherhood of Hope, and Saint Paul’s Outreach. They are well suited agents of unity in this new venture for the good of the Church.”

By Glenda Meekins of the Florida Catholic, September 1, 2021