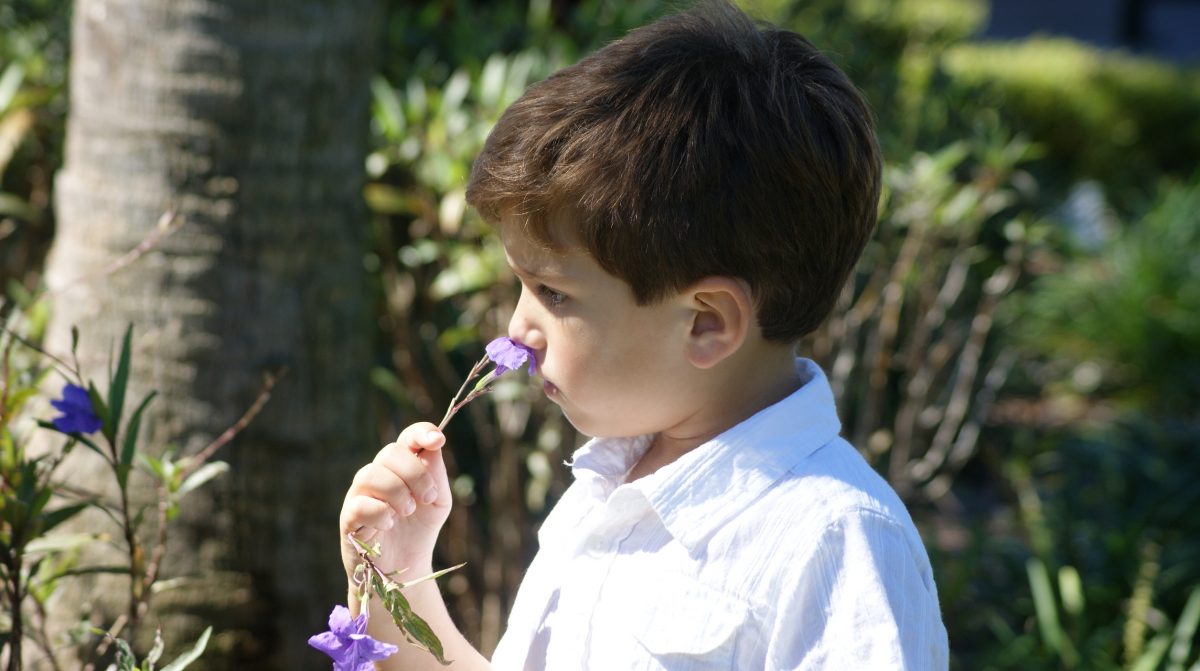 In 2013, Andrew’s family was fairly typical and not especially devout. They participated in the celebration of Mass every Sunday and their eldest was in faith formation at an early age. Then Andrew was diagnosed with Diffused Intrinsic Pontine Glioma, “a tumor located inside the brainstem that is a lot like a spider web and is entwined in the brainstem itself,” explained his mother, Lee Anne. Andrew was 2 1/2 years old. His family’s journey over the following five years would leave many unanswered questions, but mostly gratitude for a life full of unexpected graces.

In the U.S., the only approved treatment for DIPG is radiation, offering an estimated 9 months of life from diagnosis to death. Andrew was given only six weeks. “…this cancer is uniformly fatal, with less than 1% of those children diagnosed living past one year,” Lee Anne explained. Andrew not only lived almost five years, but the spiritual experiences he had during that time reaffirmed and ignited the faith of the many he encountered.

Andrew’s connection with God and the ripple effects it set in motion continue to bear fruit. But where did this faith and his experiences find their root? Perhaps in his pilgrimage to Lourdes, France at age 3 where he was one of 50 patients selected from thousands after initially being rejected. “I remember him telling me that he saw the face of Jesus when he was in Lourdes,” said his grandmother, Anne Hurley. “His comment was, ‘He’s a nice guy Nana.’” She pointed out, “He remembered, to the day he died, everything that happened to him at Lourdes.”

“He was obsessed with going back,” remembers Lee Anne because, as Andrew explained to her, “Jesus and Mary are there.”

Lee Anne noted, “I don’t think Andrew, at his age, understood ‘I have faith.’ I think it was just something that was ever-present.” That pervading relationship with Christ became increasingly evident as time passed.

Once, Andrew asked his grandmother, “Nana, do you know that I talk to angels?” She said, “I’ve heard that buddy.” “Well, what do you think?” he asked. She replied, “I think that’s pretty cool. I wish they’d talk to me.” And he never said anything else. “There was never any exaggeration or carrying on,” she recalled. “He would tell these stories very matter-of-fact. We thought it was part of the tumor.” But in all the research they did, nowhere did it say that DIPG patients experience hallucinations. Andrew would share these experiences randomly.

Referring to his natural compassion, Anne said, “He had it in abundance and it spilled over into helping the homeless.” Because of his persistence, the family started filling gallon bags with bottles of water and other items for those in need. The family would keep them in the car and give them away, everywhere from Miami to North Carolina. Later, Andrew decided to hand out rosaries as well. His sister, Hannah, recalled when he made his mother even give away their umbrella.

His love for the homeless moved the family to spend a Sunday helping at the Coalition for the Homeless in Orlando recently. Lee Anne shared that the family is trying to honor his love of others. “I watched him get money from my in-laws and just empty his pockets and reach out and give it away… He taught all of us. We do give, but he didn’t learn that magnitude from us. He took it to a whole other level.”

Andrew was born into eternal life on February 2, 2018 at age 7. Many people spent time with him in the hospital on his final day. Two diocesan priests were by his side – Pastor Todd Carpenter, OFM of St. Joseph/St. Maximillian Kolbe (Andrew’s Parish) and Father Chris Dorsey from St. James Cathedral who anointed Andrew and confirmed him.

“I had faith before Andrew was diagnosed, but my faith strengthened while on the DIPG journey,” said Lee Anne. “Andrew always had this peace and complete trust in God and heaven.”

Reflecting on the rarity of beating DIPG odds for five years, Anne noted, “I think he was kept here for the collective us. He had a message to deliver. He was hope and inspiration to other people in his situation, as well as the faith component.” His grandfather, Bob, added, “I am convinced that he was here to bring people back to God. He got me and he’s still working. You have an obligation if you’re involved in a miracle, you have to share it.”