Vespers and Ordination to the Priesthood: Becoming fathers to God’s children 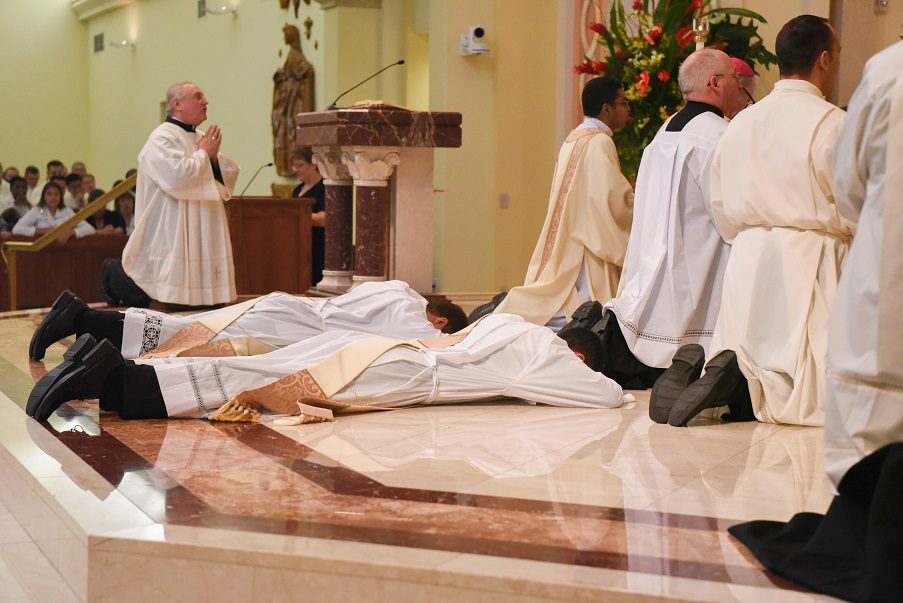 In a tradition that dates back thousands of years, two men of the Diocese of Orlando had their chalices and patens blessed at Vespers May 25 and were ordained to the priesthood on May 26 at St. James Cathedral in Orlando. Deacon Matthew Hawkins of Annunciation Parish in Altamonte Springs and Deacon Blake Britton of St. Catherine of Siena in Kissimmee, professed their vows before the many faithful who sustained them in love and prayer.

Britton’s mother, Lydia, consecrated him to the Virgin Mary while he was still in her womb. She shared, “I can’t imagine what the Blessed Mother said when she looked upon her son and realized his calling. I always think of that when I look at Blake. I think, ‘Is this even just a bit of what Mary felt?’ And then I am overwhelmed and in awe that God chose us.”

Bishop John Noonan also spoke of being chosen. He referred to Pope Francis’ motto, based on the call of Matthew, Miserando atque eligendo, which means “because He saw him through the eyes of mercy and chose him.” “You have been chosen through the eyes of the mercy of God,” he told the two deacons.

Hawkins’ parents, Judy and Paul, have found great joy in the knowledge that God has chosen their son to be a priest. “We are very happy for Matthew,” said his father. “He (Matthew) had a secular life that was very rewarding. He had an interest in Christian ministry, but something was missing. This was his avenue and I think he’s just as happy as he can be.” Judy added, “When I see him up at the altar and he’s serving, I really don’t have words. It just fills me with joy because he is so happy. It’s just so awe inspiring.”

At Vespers, Father Juan Osorno, ordained May 2017, encouraged both Britton and Hawkins to “love the people” to whom they minister. He told them to not be afraid of making mistakes. “Being in the midst of imperfection makes everything perfect… it is then that we realize we need Christ.” He added, “The Church is the hospital and God is the healer.”

Bishop Noonan reaffirmed this idea during his Ordination homily when he said, “Pope Francis said in the Year of Mercy, ‘Let us allow God to surprise us. He never tires of throwing open the doors of His heart and repeats that He loves us and wants to share His love with us.’ So, let the Lord love you so you too can share His love with the world.” Noting the words of St. Paul in the Letter to the Corinthians, he stressed that it “tells us that we are given this ministry of priesthood through the mercy of God. In your sharing of divine mercy, may you be dedicated to living out in your daily lives the mercy which the Father constantly extends to you.”

Britton often speaks of the role model of fatherhood his own father so generously provided. Reflecting on that his father, Tim, said, “It impacts me deeply. It’s the fulfillment of the commitment I gave so many years ago. You start off fast and strong in your journey, then toward the middle you struggle a little bit. You wonder if that strength and endurance is going to be there at the end, when the lights go down and everyone you know is gone, will you still be that faithful, determined person? That’s what I pray for Blake. There comes a time when you’re not a father anymore. You’re more of a guardian and you have to let go, have faith in God and faith in the process. I’ve done my job. Now he’s going to be a father.”

As fathers guiding their children, Bishop Noonan reflected on the words of Pope Francis, telling Britton and Hawkins to cry “the tears of a priest” and “to battle with the Lord for your people.” He concluded saying, “You will be anointed because your names have been made known to God… Matthew and Blake… behold the treasure you are about to become  ̶  vessels of Truth  ̶  you will not only preach the Gospel, but also live the Gospel. You preach Jesus Christ as Lord and yourself as servant for the sake of the Gospel.”

Father Hawkins has been assigned to St. James Cathedral in Orlando and Father Britton to St. Mary Parish in Rockledge.

View Gallery of the Ordination to the Priesthood