Vigil hopes to save lives 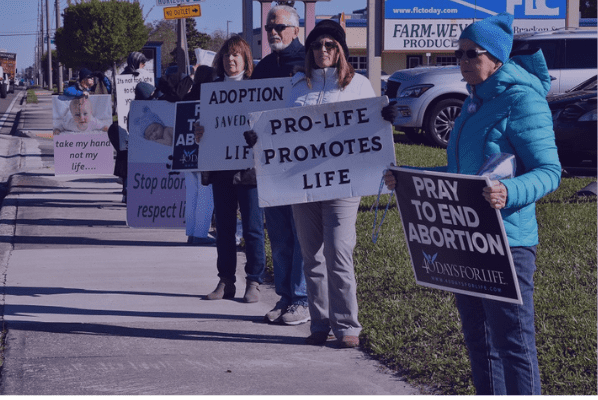 LAKELAND | It is Ash Wednesday and most of the sidewalk advocates for 40 Days for Life have already participated in the celebration of Mass and received their ashes. They are armed with the Holy Spirit to do God’s work. Standing on the curb in front of an abortion clinic in downtown Lakeland, they hope this year’s 40 Days for Life will be even more successful than the last. The daily vigils are characterized by the elements of prayer, fasting and peaceful witness from March 6 through April 14.

Maryanne Stevens, coordinator for the Lakeland vigils, says the team of prayer warriors and sidewalk counselors, “had at least one confirmed save each week of the campaign last year.” She adds, “But as I tell the participants, we won’t know this side of heaven how many babies we actually saved as statistics have shown that when people are praying outside the clinic there is sometimes as much as a 50 to 75 % no show rate.” Stevens has spent years advocating for life.

“Just last year I was privileged to meet a woman, Jessica, who informed me that when she was 17 she hated me,” explained Stevens. “She wanted an abortion and she felt she could not tell her father or her boyfriend’s Evangelical parents that she was pregnant. Her boyfriend was driving her to the abortion clinic when she saw the sidewalk advocates praying outside. She told her boyfriend to keep driving and that she couldn’t do it. She went on to have her baby, who was embraced and loved by the whole family.” Jessica went on to get married, have more children and adopt children in thanksgiving for having kept her first baby. That baby is now a mother herself. The irony is that Stevens would have never met Jessica had she not had trouble getting copies for an event. She ended up at a store where Jessica was the manager.

Each year, the 40 Days for Life campaign is full of such stories. Mary Rutherford is the coordinator for Church of the Resurrection in Lakeland and spent 15 years as director of Options for Women, a pro-life clinic. Her first involvement came on the heels of the Roe v. Wade decision in 1973. She recalls the early days when she worked on a crisis line. “The first call I ever received, the girl said, ‘I want to get an abortion. Where do I go?’ My mouth just dropped,” recalled Rutherford. “At that time, there were abortion clinics already. We had to find ways of helping them because there were no pregnancy centers. It was just over the phone providing different resources, like Catholic Charities, places where they could talk about adoption instead.” Today, she is thankful there are many more options.

Rutherford and others like Fran and Marc Vander Poel committed to standing vigil at least once per week throughout the year, beyond the initial 40 days. Marc carries a sign saying, “Adoption saved my life.” Yet his adoption is not the source of their passion. He said, “We always felt that trying to save a life is very important.” He and Fran admit that, although his adoption was not a motivating factor, it was a way to point out that all life matters. Last year, the couple helped save the child of a couple who approached them. They couple was concerned about finances and other issues. The Vander Poels led them, by car, to Options for Women, just a few blocks up the street where they were greeted warmly by staff. “We all cried and hugged,” recalled Fran. “They (the couple) were very thankful because they didn’t know about the Option for Women.”

The traffic from passersby is another reason for volunteers to stand vigil. “A few stop by and encourage us. They bring us drinks and offer mental and moral support,” said Marc. “One man saw us and was so moved. He was out of work so he came to help us for about six months until he found a job,” said Fran. “Even without a save, just the traffic going by helps keep the issue on the forefront,” she added.

The 40 Days for Life campaign continues through April 14. To learn more about a vigil near you, go to 40daysforlife.com