Vincentians care for those on the fringes 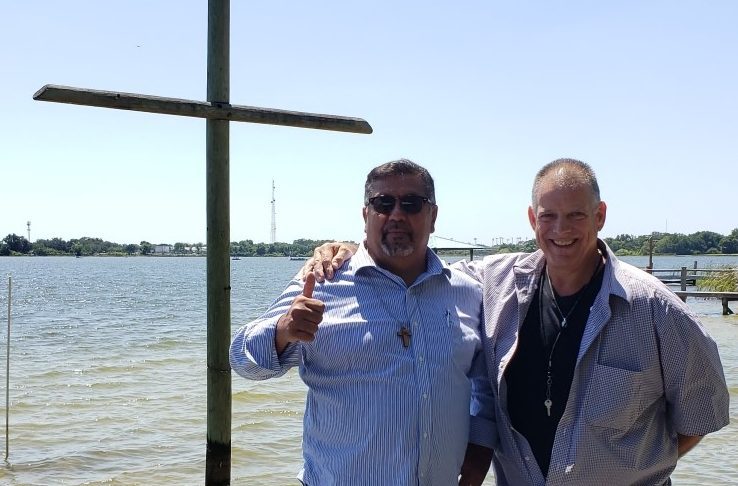 ORLANDO | Diana Blanco became homeless after both she and her husband lost their jobs and she had suffered a miscarriage. Family friends helped them get back on their feet. She wanted to pay forward the help she received through serving in a food pantry and thrift store. Carlos Benitez’ childhood experiences of racial discrimination and social injustice in the Bronx, coupled with his family’s example of charity, led him to help prisoners. They are Vincentians, from the Society of St. Vincent de Paul, and their work is a light to others, especially during this tumultuous time of pandemic. Together, they follow the Vincentian motto: “No work of charity is foreign to the society.”

It is early at Our lady of the Lakes Parish in Deltona, and Diana Blanco is trying to figure out how to offer pantry clients the chance to get much needed clothing. The thrift store has been closed since March. The food pantry has been modified for drive-through pick-up services by appointment. At their first mobile drop in April, two days after Florida’s shelter-in-place order, pantry volunteers loaded groceries into 417 cars, feeding over 1,00 families. The need is greater than ever. People she’s never seen before are showing up for food – young families with a lot of children. Blanco became a Vincentian six years ago. Helping those in need is her passion. 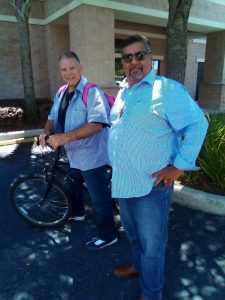 “I know what it’s like to be homeless. If I hadn’t been helped by somebody, I could have seen myself and my husband living in a tent, just like everybody else. So, I believe I should pass that forward – and do everything in my power to help give another person a chance.” She continues to brainstorm with the other volunteers and finds the solution. They set up racks on the curb to display clothing and linens. As cars pull up, they ask if anything is needed and show clients the wares from afar.

“I didn’t think much of it. In a way, it was a way to get things out,” said Blanco. “I knew stores were not open and you have to order online. But there was a gentleman that came and said, ‘You have no idea how much this has helped me. I don’t have working pants.’” Blanco admitted the thought had never crossed her mind. People are losing jobs and interviewing for others, needing clothing, she thought. “They have no way to buy it, afford it or get it.” The man was grateful. “It didn’t dawn on me how this little thing could make such a difference in someone’s life.”

This is the Vincentian way. They tend to “think out of the box”. When the City of Deltona asked Blanco’s conference to help a disabled, homebound man meet his back taxes so donated construction services could step in to fix a large hole in the resident’s roof, the city knew the Vincentians would help. The house needed $70,000 worth of repairs. At one point, the city wondered whether all the effort was worth it and the man should not just relocate. Blanco thought about it and said, “What is a life worth, to be on the street. If you cannot pay it, what will happen to that person. You cannot put a value on a life.” She added, “I just asked the Lord to guide us and help us do what He wants us to do.”

Relationship with Christ is the source of Vincentian’s strength and perseverance and a heart inflamed with a desire to help the most vulnerable. Among those on the fringes are former felons. The Vincentian’s St. Peter Claver Prison Ministry began out of Holy Family Parish in Orlando in 2006 with four volunteers. Today it exists in 9 states and works with those inside prison and those getting released to stay out through transition assistance.

Carlos Benitez became a Vincentian in 2018. His experience with Kairos Prison Ministry for 15 years led him to the Society of St. Vincent de Paul’s St. Peter Claver Prison Ministry where a group of Catholic volunteers commit themselves to reducing recidivism in Florida. Becoming a Vincentian and leading the St. Peter Claver Ministry enabled him to minister to convicts more holistically. Through spiritual and practical training programs that start in prison and continue outside the walls, ministers provide resources, guidance, and encouragement needed for men and women to move on to permanent housing and employment.

Since the coronavirus outbreak, eight men have been released from the prisons in which the ministry serves. “The problem with COVID is that before, we coordinated this pre-release plan and it was a smooth transition. Now, I have no way to communicate with these people. They’re not going to chapel (where he would normally meet with them),” Benitez explained. He has an idea of when they’re getting out, but more than once, he receives a call like the one on Saturday morning, May 2.

“They just dropped me off at the Winter Haven bus stop. I don’t have a place to stay. I was out all night homeless,” said the man on the other end of the phone. Benitez got up and headed out to get him and find him a place to stay. “It was a sense of urgency,” recalled Benitez. “So, what has the pandemic done? It has created a sense of urgency for those that are in dire need. The institutions are releasing some without even having a concrete, physical place to stay and a lot of shelters are closed.” 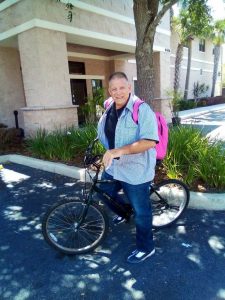 The man released that Saturday was part of the mentorship program. In 24 hours, he had exhausted is contingency plans.  His call to Benitez was desperate and one of last resort. He told Benitez, “I know if I stuck around here, the people I’ve been seeing on the streets last night were offering me meth and drugs and I was tempted. I knew I had to get away from this place.”

Of the 100 prisoners the ministry helped in 2019, only five have returned to prison. “I’ve drilled into their mind that their release plan needs to be specific, measurable, attainable, realistic and have time-bound goals with a plan A, B, and C. Otherwise, their bubble will burst. They’ll be in despair and these guys will be suicidal and or go back to repeat offending,” Benitez said. “It’s important that we instill in them a sense of being a citizen – that people love them; that Christ loves them; and that they were created in the image and likeness of God and they’re not garbage. Most of their whole life, people have not cared about them and have demeaned them, so it becomes a self-fulfilling prophecy. St. Peter Claver is there, not to be a transactional civic service, but a transformational spiritual encounter with Christ. When they realize that, then they know they have hope.”

To help them, St. Peter Claver ministers work on a four primary points: employment, housing, social/personal goals and spirituality. “The most important part of that four-point release plan is the spiritual part,” noted Benitez. “If, in every decision you make, you say ‘God willing, if the Lord allows it…’ God will provide. He won’t abandon you.”

Anthony Selvester is living proof. He was released from the Central Florida Reception Center, a state prison in Orlando, March 31, after his second stint in prison because of alcoholism. The fact he is alive, is in itself miraculous. He had overdosed, crashed his car going 100 mph, and made a plethora of bad choices. He credits Benitez and his team for a successful outcome this time.

Looking back, Selvester said, “Every time I used to drink, I usually broke out in hand cuffs. It finally dawned on me, at the late age of 57 years old, that all these years I couldn’t get it right.” This time around, he’s working his plan. Selvester says he has an upper hand, and that it’s “a guy like Carlos” and the others who are helping him. “Carlos spun me in a direction that can edify me and build me up in God’s wisdom to do the right thing,” he said.

Through the program, he received a bicycle and backpack equipped with clothing, hygiene items and a cell phone. He wakes up at 5:30 a.m. every day to pray and reads the bible in the evenings, studying and reflecting. Shortly after his arrival at Fresh Start Ministries, Christian transitional housing for felons, he went in search of work just as the pandemic was ramping up and businesses were ordered to close. He spent six weeks, often riding 20 or more miles per day to find employment. He would come home suffering from cramps in his legs.

“I cried out to God, what do you want from me… I’m about to break,” he prayed. He stopped in a Speedway to get a cold drink. “I see this guy come in with his truck and a trailer with all this equipment on it,” he recalled. The man says, “How ya doin’ bubba?” He is 6’5.5” and Selvester looked up at him and said, “I’m trying to get a job. How are you?” Selvester told him his life story and the man invited him to come and work for him the next day as a pressure washer. The old Selvester would have given resorted to finding solace in a bottle or pills, but frequent phone calls to Benitez helped him endure.

Benitez will continue to mentor Selvester for a year or until he no longer needs it. “The whole thing is to not just service people. This is establishing a relationship that’s permanent as a friend in Christ. Once they know that, there’s a paradigm shift, a metanoia, that is transformational. Once they make that mindset shift, that it’s all about loving Christ and God on a vertical relationship and with each other in a horizontal relationship – the golden rule of loving God and one another… Once they get that, they’re on the road to success.”

It is helping “the least of these” referred to by Jesus in Matt 25:36 that thrusts Benitez compulsively forward. “Whatever you do, you do unto me. I was naked and you clothed me. I was in prison and you came to visit. That’s my mantra. That’s what I live for.”

By Glenda Meekins of the Florida Catholic May 13, 2020