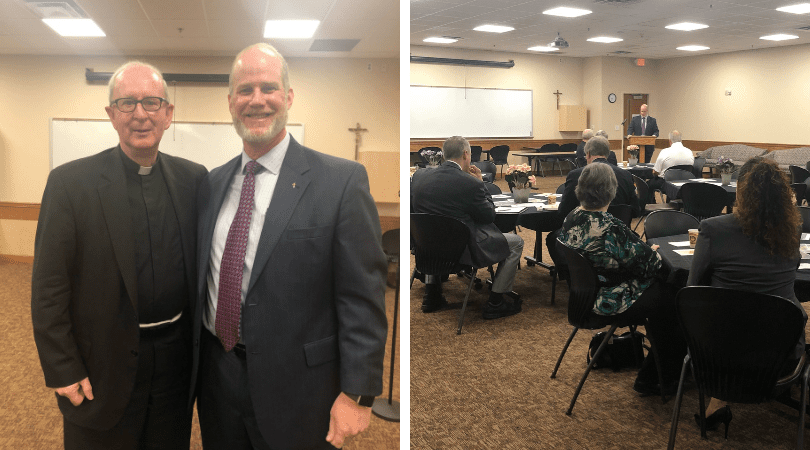 ORLANDO | Catholic business leaders from across Central Florida became reenergized in living out their faith in the workplace at the second Catholic Business Leaders Breakfast. On October 26 at St. Margaret Mary Parish in Winter Park, professionals gathered with Bishop Noonan to discuss what Catholic leadership looks like and to explore ways to bring faith into their professional decision making. Michael Pleus, City Manager of Deland, shared his journey of faith and inspired attendees with examples of service in the workplace.

Born into a Catholic family, Pleus says his personal faith journey began at the age of 7 when he became an altar server at Holy Family Catholic Church and was inspired by the priests and religious he saw living out their vocation. “I was so moved by those who spend their lives in service to others,” he said. “There just seemed to be a peace about them.”

At 27, Pleus went on a mission trip to the Dominican Republic. He stayed with a local family and was deeply impacted by the peace and faith of the people despite their poverty. “There were no toilets or air conditioning and most of their houses had dirt floors,” he shared. “However, these people were just about the most spiritual people I have ever met in my life.”

He was also inspired by his father’s work as a judge, especially when he wrote a dissenting opinion on a case, giving an unpopular prolife perspective. “I remember thinking how brave it was to put his Catholic faith ahead of what his colleagues were telling him even though he disagreed with them.”

Pleus highlighted examples of his faith inform his own professional decisions, including a comprehensive plan to address homelessness in Deland utilizing the resources of businesses, churches, and non-profits in the area to open a crisis shelter, set to be operational sometime next year. He says this project was a calling from God. “God was calling me to step forward and propose something bold that would help those experiencing poverty and homelessness successfully navigate their reentry challenges and get back to a normal life. Isn’t that one of our basic and moral obligations as Catholics?”

In 2000, Pleus was also inspired by his father’s decision to become a deacon. “I remember how proud I was of him when he decided to go back to school, at 60 years old, to become a deacon,” he remembered fondly. “I could absolutely see the Holy Spirit working through him.” Michael is now discerning the diaconate himself, after seeing the support the deacons provided his father after two hip breaks this past year. “Throughout that trial the one thing that he could count on were the deacons who were at his side making sure that he received communion and prayer every day. I was so moved by this brotherhood of servants.”

Overall, Pleus has found he is most at peace when he embraces God’s plan in all aspects of his life, and he encourages others to do the same. “Often times we separate our personal, professional and spiritual life. I would encourage you to embrace the idea that they are actually interrelated. Being open to how your Catholic faith might help you in your personal and professional life may just lead to some amazing revelations, profound ways to serve others and create a greater happiness in your life.”