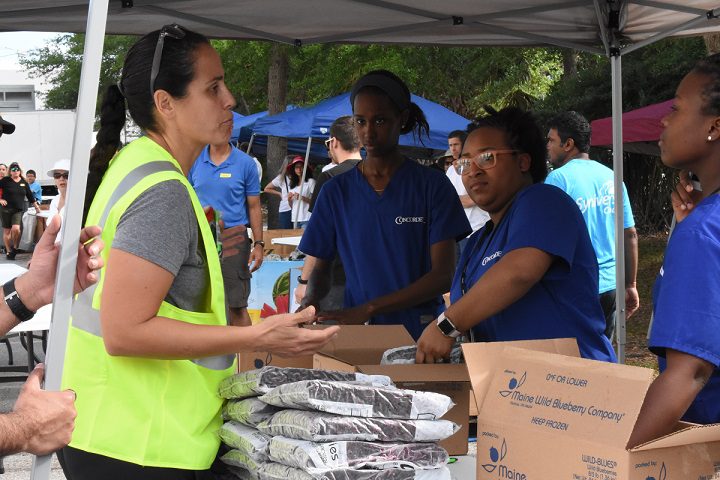 Helen Birkett has come to all 10 mobil food drops and began leading volunteers on April 3. Catholic Charities has distributed 254,000 pounds of food since May 2017 to those in need. (GLENDA MEEKINS)

The Second Harvest Food Bank truck rolled in and Catholic Charities staff and volunteers began to unload almost 24,000 pounds of food. It was April 3 and the tenth mobile food drop since Catholic Charities of Central Florida began to offer food through mobile drops for those in need at their Orlando location once per month. Helen Birkett of Sts. Peter and Paul Parish in Winter Park has been there for each one of them and was just getting her feet wet on April 3 as a volunteer coordinator.

Birkett worked as a volunteer at the May 2017 drop with her daughter and teammates from her lacrosse team. What started as something to do in the summer became a labor of love that has kept her coming back and eventually helping lead the effort.

As she walked through the long row of tables, mingling with almost 80 volunteers, she made sure tables were loaded with food and counted supplies to ensure all those in line could be fed. More than 300 tickets were given to families, with some waiting in line long before sunrise. The food distributed that day fed more than 1,000 people.

“The first day I started we didn’t even have half as many volunteers as today,” said Birkett. “These businesses that are bringing in their groups are doing an amazing thing. Now you have people who have done this like me, and who knows, maybe a couple months from now someone else can help in this position.” She was referring to local companies that encourage and allow staff to volunteer in the community during the regular workday.

“It’s really about keeping the line moving and making sure every single person gets something,” she explained. As pallets of bread, juice, vegetables and meat were placed, volunteers loaded up the tables for easy access to groups of 20 individuals as they came through the line.

Pedro Diaz was grateful for the food he received. He shares what little he has with his neighbor who sometimes cannot make the food drop. Mercedes Riveron, who left her homeland of Venezuela for political reasons and arrived eight months ago, said it’s her second time in line at the food drop. “For us this means a lot as I cannot work because of our little ones. This helps me compliment what my husband provides,” she said.

Participating in the event had such an impact on her daughter that she began a project called Bags of Hope where she puts bottled water and a granola bar in a bag. Birkett noted, “She’s been distributing it to her friends and that way when they pass a homeless person, they have their resources. They do that for their school. At our church, we work with Coalition for the Homeless every fourth Sunday of the month, so we’re involved as much as possible.”

May 1 Catholic Charities will hold its mobile drop at St. Catherine of Siena in Kissimmee for the first time.