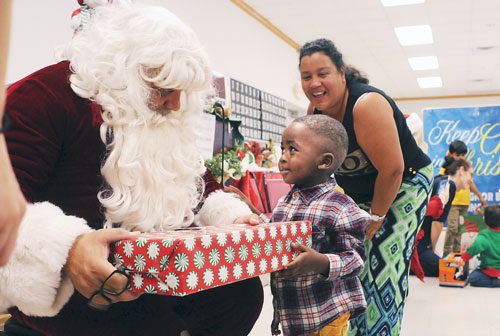 Dozens of refugee children curiously eyed colorfully wrapped Christmas gifts as they awaited the arrival of Santa Claus Dec. 10 at the Knights of Columbus Hall in Orlando. Nearly 80 refugee children and their families who arrived in the US from seven different countries within the last year, gathered for the 5th annual Breakfast with Santa, a collaboration between Catholic Charities of Central Florida’s Refugee Resettlement Program and Knights of Columbus Council 2112.

Volunteers prepared a buffet style pancake breakfast for the families, decorated the hall with Christmas trees and provided a Santa to give out the donated gifts.

As the refugees arrived, youth volunteers from St. Isaac Jogues and Good Shepherd parishes ushered the children to the craft tables where they made Christmas ornaments, while musicians played guitar and sang Christmas carols.

“We thought, at first, it would be awkward, trying to communicate with people that don’t speak our language” said Arianna Hernandez, from Good Shepherd in Orlando.  “What I realized is that when you smile, it’s the universal language; smiling helps. I think peace begins with a smile.”

In his Message for the 2017 World Day of Migrants and Refugees Pope Francis said that we need to recognize the right of children to be children. Events like the breakfast with Santa give these children who have gone through so much just that opportunity.

Good Shepherd volunteer Fatima Fernandez said, “I know they have gone through some things and we don’t know their struggles, but they don’t think about it at this moment, and just want to have fun.  It has been a great experience.”

196 individuals came to Orlando through the Refugee Resettlement Program this year, a federally-funded program that provides a permanent solution for refugees fleeing persecution and violence in their home country.  The Moran-Hurtado family left their home in Colombia after a criminal gang, well known for cruelly torturing their victims, threatened a member of their family. Since their arrival, Catholic Charities has helped them find housing, enrolled the children in school, and found employment for the head of household.

“We weren’t expecting such a big Christmas celebration,” says Diana Hurtado.  “Everyone has been so kind and attentive.”  Hurtado hopes that her family in the coming year will be able to learn the language, make friendships and move forward in their new life in Orlando. “We are so happy that my husband found a job so fast.  We feel safe here.”

In addition to the presents, that were largely donated by a Catholic women’s bible study group from Most Precious Blood Parish in Oviedo, Project Giving Kids, a ministry of St. Mary Magdalene School in Maitland provided the refugee children with new backpacks and lunch boxes and $1,300 in grocery gift cards for the parents. In addition, the Catholic Foundation of Central Florida “adopted” refugee children, purchased and wrapped Christmas gifts for them.

“Breakfast with Santa is an important way of bringing people together from different religions and backgrounds,” noted Resettlement program manager Carolina Toro.  “Watching the faces of the kids as the received their gift, seeing the Congolese family singing Feliz Navidad with such joy, that is the spirit of what we are doing.”