Walk-a-thon raises money to save babies 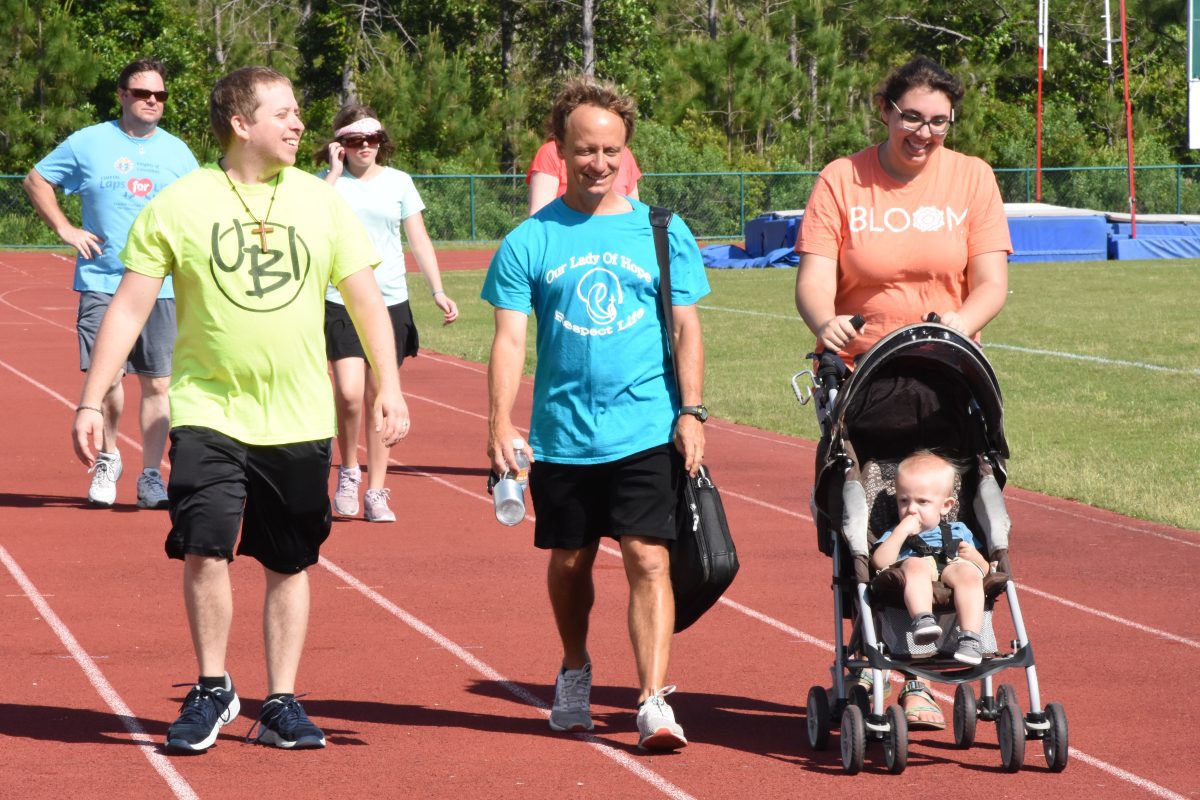 DAYTONA BEACH – On a sunny, Saturday morning, eight Knights of Columbus councils gathered with almost 200 participants for Coastal Laps for Life, the pro-life effort that puts ultrasound machines into crisis pregnancy centers. Walkers came from Father Lopez Catholic High School in Daytona Beach, where the event took place, and from other interfaith churches and schools. With the release of the movie “Unplanned,” and recent laws extending abortion dates, the coordinators felt the timing could not be better.

This is the fourth year of the event and by far the largest. Knights of Columbus Grand Knight Jim Waggoner, from Our Lady of Hope Council 8086, credited the cooperation with other councils for its success. “The first year it was just us,” he recalled. He hopes to have even more councils participate next year.

In 2009, the knights chose to make “a firm commitment (nationally) to support pro-life because of the dramatic witness of seeing your baby on a screen,” said Waggoner. “We feel we’re saving lives. We have 30 service organizations we work with, but of all of those, this is the most critical to us because this is where we can say we’re making a difference.” Since the program began, councils have put 88 machines into crisis pregnancy centers across Florida and more than 1,000 nationwide.

At a cost of $30,000 each, local councils fund up to $15,000 per unit. Qualified centers that receive an ultrasound machine must be faith-based and have a pro-life mission. This year, Alpha Women’s Center in Bunnell is the lucky recipient.

The center had a mobile unit coming twice a month until last September when Life Services shut down, requiring the pregnancy center to make referrals in the hopes that women would follow-up. Wilma Williams is Alpha’s director. “Ten percent of the women who come in are abortion minded or abortion vulnerable,” explained Williams. Abortion minded means they come in determined to terminate their pregnancy. Abortion vulnerable means there are other concerns, such as economics, but they are willing to entertain other options. “Often the convenience of the decision seems to drive those who are abortion vulnerable,” she noted. “The new machine will allow transvaginal and transabdominal ultrasounds,” moving the “seeing and hearing” of the baby in utero within six weeks, a critical time when most women come in, she said.

Williams, who had her own abortion experience, said she is especially appreciative to the Knights of Columbus councils and all they do to support life. Despite having two ministers as parents, “They rejected my pregnancy and my baby,” recalls Williams. “I didn’t know about pregnancy centers or other options. I was 20 when it happened.” After watching the movie “Unplanned”, Williams called her parents and told them she forgave them. Their opinion “had a huge effect on me,” she said.

Youth director at Prince of Peace Parish in Ormond Beach, Tom Silliker and his wife, Shaina, a theology teacher at Father Lopez, participated in Coastal Laps for the first time with their 14-month-old son. “We recognize right now we live in a culture that doesn’t respect life,” said Tom. “With the news laws in different states, we’re fighting a battle.” The Sillikers are expecting another baby in October, when the ultrasound is scheduled for installation at the Alpha Women’s Center.

“I cried when I first saw my baby on the ultrasound. How beautiful and miraculous that life is–knowing that my body is able to sustain that,” said Shaina. “I think if more women were educated on and could have access to that (ultrasounds), then it would definitely make a difference.”

The April 13 event raised more than $17,000, helping make Alpha’s machine possible. Waggoner noted, “An abortion is a terrible thing and there are emotional repercussions later for the would-be mother, so we have a vested interest in making sure this program is successful.”