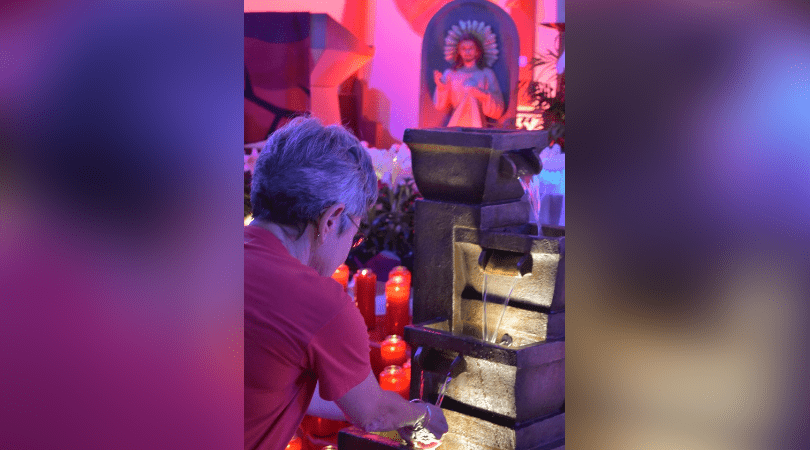 DUNNELLON | A sea of red and white shirts flooded St. John the Evangelist Parish in Dunnellon as the Eucharistic procession began in honor of Divine Mercy Sunday, April 28. Swaths of red and white fabric hung from the ceiling, and draped over the sanctuary in six directions. Pastor, Father Jean Desir, held the Blessed Sacrament high and followed more than 200 congregants out of the main doors, into the Florida heat. The procession stopped at each of four stations, singing on their way.

Divine Mercy Sunday received its name after Saint Faustina Kowalska of the Blessed Sacrament saw visions of Jesus, who asked her to have the image of his apparition painted. Jesus explained he wanted the Divine Mercy image to be “solemnly blessed on the first Sunday after Easter; that Sunday is to be the Feast of Mercy,” according to the saint’s diary, Divine Mercy in My Soul. She noted the Lord asked her to have the image publically honored and so it was on April 26, 1935. Five months later, Jesus revealed the Chaplet of Divine Mercy to her.

As the procession at St. John the Evangelist made its way back into the church, the faithful sang the chaplet, then sat in silent Adoration. “This is a day for laughter because the devil was defeated by Jesus’ resurrection,” said Father Desir.  “It is a day for laughter because we were lost and Jesus found us and brought us back home where we belong. The pastor grew in his devotion of the Divine Mercy when he served at St. Faustina Parish in Clermont. Many of his former parishioners travelled to celebrate the special day along with groups from nearby parishes of Queen of Peace and Blessed Trinity in Ocala.

“Jesus triumphed over our enemies,” he continued. “This does not mean that evil and death no longer exist in the world… Anything that is happening in the world today (referring to the bombings in Sri Lanka) is not the final outcome if we live our life in God.”

Father Desir assured those gathered of God’s compassion, reminding them an honest examination of conscience and confession is required. “Divine Mercy Sunday is a time to see what messes you make in your own life,” he said. Then “wash in God’s ocean of mercy.” As a symbol, the assembly came forward and washed their hands in three fountains at the front of the sanctuary, surrounded by flowers, candles and a Divine Mercy and Saint Faustina statue.

Linda Porter has attended the service for several years with her mother, Gladyce Gauthier. Porter said the fountains, “allow us to move on with fresh life. The act of just rinsing your hands and the altar servers standing by in their cassocks – it has a dignity to it.” She added, “I think it’s very inspiring to people to stop and reflect and move forward with new life and revival of their prayer life. It is like a private act of devotion, surrounded by your fellow parishioners. It’s a communal act and yet deeply personal as well.”

Porter had not heard of the Divine Mercy prior to Father Desir’s arrival. Now the parish devotes a holy hour on the first Friday of each month, beginning with the Chaplet of Divine Mercy. However, Porter says one every day. She says, “It’s a reminder of God’s all-encompassing mercy to all of us.” Her mother added, “It strengthens my faith.”

Lisa Slattery, director of liturgy, helped coordinate the afternoon. “The service has had an impact on our community,” she said. “We even have other people who aren’t Catholic come.” Father Desir credits that to the parishioners’ devotion. Since he brought it to the parish, his congregation has grown. He hopes it continues to bring those who have strayed back to the church. “The picture says, ‘Jesus, I trust in you.’ It shows Jesus never leaves or abandons them,” he said.

By Glenda Meekins of the Florida Catholic -May 2, 2019