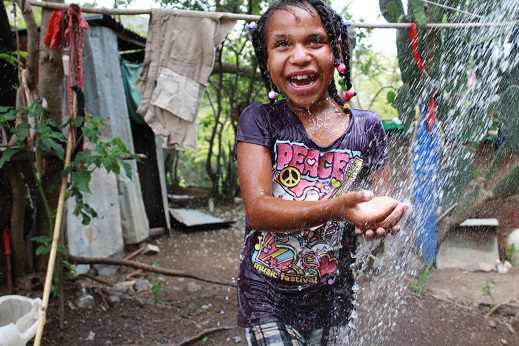 A young resident of La Cueva jumps into the new stream of water coming from a spigot outside her home for the first time. She has yet to understand how this water will change the course of her life. (JOHAN DE JESUS)

LA CUEVA – Seventy-one-year-old Francisco “Lyn” has never had running water in his home. To water his fields, he relies on water brought from a stream, a 40-minute walk down a steep mountainside. Balancing the five-gallon buckets on their heads, the women of La Cueva make the trip two or three times per day, often with a child in one arm and freshly washed laundry in the other. Until recently, this was everyday life in the remote mountaintop village in the Dominican mountain range of Las Lomas.

Everything changed for this community of 73 families on May 10 when Emmett Sapp, who directs construction missions for the Diocese of Orlando, turned on a spigot just outside a home on the dirt road that runs through the center of town. Estela, an older resident, sang and praised the Lord. Children frolicked in the water and even Angelica, the town’s matriarch, stepped under the outside shower to be drenched by blessings brought from a newly tapped spring 3.5 miles away. She did not mind that she was fully clothed. It was time to celebrate. 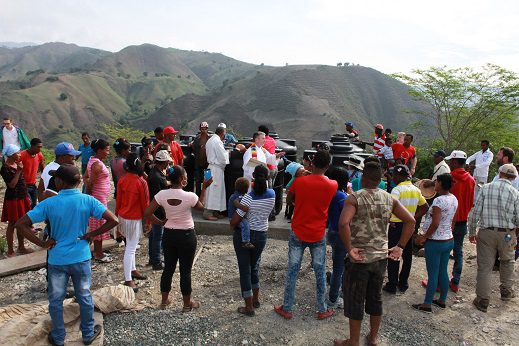 “I think La Cueva would not have survived without this water,” said Sapp. “It’s given them new life and the incentive to grow. I think it’s going to be what takes them to the next level.” Accompanying them on this journey is what the diocesan Mission Office and parishes like Ascension and Our Lady of Lourdes in Melbourne are committed to. Ascension Parish helped fund the bridge built in 2015, connecting La Cueva to eight nearby communities. Until then, residents were completely isolated when the rains came. When diocesan priest, Father Fred Ruse, first began to journey to the small town in 2006, it was only accessible by foot or by mule. What he found, said Sapp, was a “community small and very poor, but very spiritually alive. He would make the journey at least once a week to celebrate Mass.” Sapp recalled, “Almost everyone would attend.”

In 2016, Bishop John Noonan visited the remote town and asked the residents for a wish list. Topping the slate was running water, followed by proper housing and electricity. Sister Bernadette “Bernie” Mckay, O.S.U., director of the Diocese of Orlando Mission Office, soon created a water committee and tasked the team with finding a suitable spring. Town residents agreed to pay $60 to have water run to their home and to commit 200 hours each to the construction of the aqueduct. Digging the 3.5 mile, two-foot deep trench, through rocks and packed soil began in this past March. 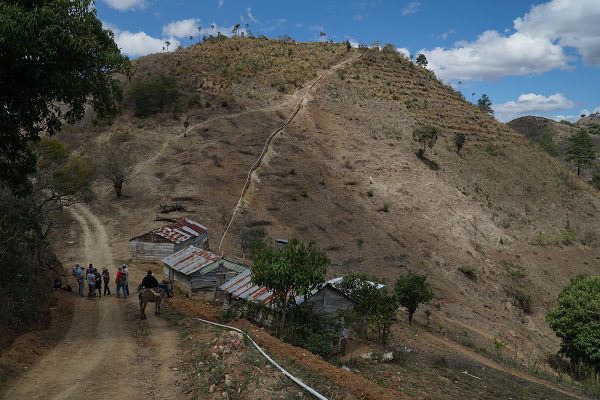 The committee located a spring 400 feet above the town’s elevation and it was purchased for La Cueva by Deacon Carlos Solá and his wife, Maria de los Angeles. Deacon Solá began serving the region five years ago and knew the locals could not afford to purchase the plot. Although Dominican Republic law states all springs are public property, Deacon Solá said, “That did not guarantee the care of the area that would ensure the quality and quantity of the water could be sustained.” So, he and his wife committed to the purchase and named the spring Mi Manantial (My Spring), because they wanted the community to take ownership, for it will be their responsibility to maintain the area and ensure it remains ecologically sound.

With the help of recently ordained nearby resident, Deacon Nilsen’s son, Ramón “Micha”, a scientist and expert farmer, they are preparing the area as a natural sanctuary to protect the flora and fauna. Deacon Solá said, “We were motivated by responsibility for others. When one goes, not just to serve, but has identified with those he serves, it becomes a responsibility of the heart, not the head. It is saying, these are my people and my place. We are Catholic and that means universal. Here, there are no frontiers or walls that divide us. As Pope Francis said, ‘Let us create bridges and get closer to the people.’ Now, our own roots are somehow planted there.” He says the purchase has affected his three children, who now have a desire to join in the mission. “This is what has most achieved an evangelical commitment in them,” he said. “We did this because we could and to continue expanding God’s kingdom with responsibility.”

There is no doubt the missioners’ love has made an indelible mark. On May 10, after almost four hours of anticipation water finally sprung forth to 28 homes and several fields in La Cueva. In gratitude for a successful project, Father Karl Bergin, Pastor of Our Lady of Lourdes Parish in Melbourne, blessed the reservoir and aqueduct with a Mass.

Sapp said, “The progress over the past 9 years has been living witness to me of the power of the Holy Spirit, when communities of completely different cultures show love for one another. I thank God for this experience.”