ORLANDO – Marge and Romeo St. Pierre know a thing or two about a successful marriage; they will celebrate their 70th wedding anniversary June 3. 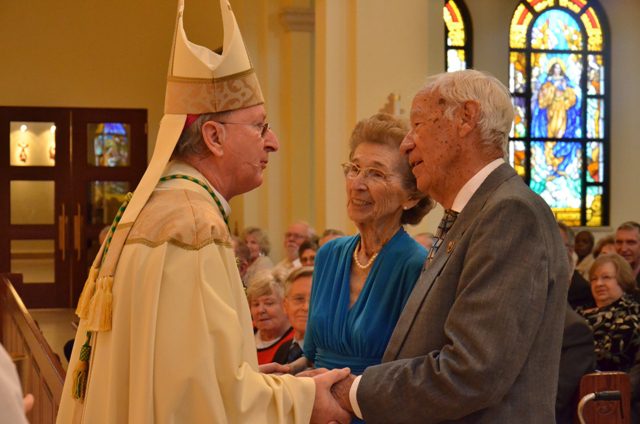 ORLANDO – Marge and Romeo St. Pierre know a thing or two about a successful marriage; they will celebrate their 70th wedding anniversary June 3.

“You decide when you get married that this is it, and you make the best of everything,” Romeo said.

The St. Pierres were among the nearly 700 people who attended the annual Wedding Anniversary Mass on Feb. 4 at St. James Cathedral in Orlando. The Mass is celebrated each year near World Marriage Day, when couples worldwide honor their vocation as husband and wife. Couples who attended had been married from 5 months up to 70 years.

Bishop John Noonan concelebrated the Mass and presided over the renewal of each couples’ wedding vows. He also congratulated each of the couples for resolving to strengthen their marriages in a society that sometimes does not understand, appreciate or even value the sanctity of marriage.

Marge, 89, and Romeo, 91 met in South Portland, Maine, and were married in Portland, Maine in 1942, at ages 19 and 21. Romeo St. Pierre was serving in the U.S. Army during World War II. Due to his service and a number of assignments, the couple didn’t see each other for a total of five years. When they reunited, it was as if nothing had ever changed.

Together, they traveled around the U.S. and throughout the world, as Romeo served his country. It was in Vienna, Austria that Marge St. Pierre was confirmed and received into full communion with the Catholic Church. They also lived in Japan for four years as well as California, Washington state and New Jersey, before Romeo retired from the army.

“I enjoyed having her follow me wherever I went,” Romeo said.

The couple moved to Florida in 1987 and currently attends St. Timothy Parish in Lady Lake. They continue to spend time volunteering, vacationing together and visiting family members. The St. Pierres have six children and grandchildren, and many of their most memorable moments came with family members.

The St. Pierres presented the gifts during the anniversary Mass, and following a blessing by Bishop Noonan, received applause from the entire community. When asked what their secret was to 70 years of marriage, the St. Pierres agreed there was nothing special.

“You’re a family, so you stay together,” Marge said. “I don’t think there are any secrets.”

Added Romeo: “I don’t think we have anything to regret in our lives. We’re blessed in our ways; we’ve been very blessed.”