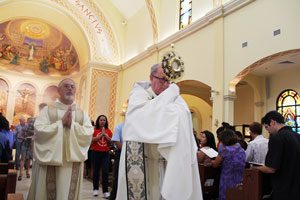 For the Solemnity of Corpus Christi, last Sunday at 5:00 in the afternoon in St. Peter’s Basilica, the Holy Father presided over Eucharistic Adoration, an initiative of the Year of Faith inviting the faithful of all the dioceses of the world to unite spiritually. 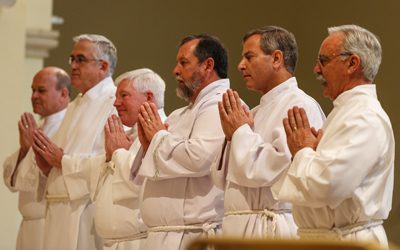 For the Solemnity of Corpus Christi last Sunday, at 5:00 in the afternoon in St. Peter’s Basilica, the Holy Father presided over Eucharistic Adoration, an initiative of the Year of Faith inviting the faithful of all the dioceses of the world to unite spiritually.

It was a historic event. For the first time in the history of the Church all the cathedrals around the world where synchronized to the time in Rome and, for an hour, were in communion with the Pope in Eucharistic Adoration, under the theme of “One Lord, One Faith”. The initiative involved not only the world’s cathedrals, but also parishes, religious congregations—mainly cloistered monasteries—and lay associations around the globe.

The Sistine Chapel Choir accompanied Pope Francis’ journey along St. Peter’s central nave where he prayed for the intentions: “For the Church spread throughout the world and united today in the adoration of the Most Holy Eucharist as a sign of unity. May the Lord make her ever more obedient to hearing his Word in order to stand before the world ‘ever more beautiful, without stain or blemish, but holy and blameless.’ That through her faithful announcement, the Word that saves may still resonate as the bearer of mercy and may increase love to give full meaning to pain and suffering, giving back joy and serenity.” 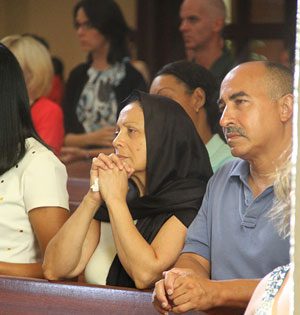 Pope Francis’ second intention was: “For those around the world who still suffer slavery and who are victims of war, human trafficking, drug running, and slave labour. For the children and women who are suffering from every type of violence. May their silent scream for help be heard by a vigilant Church so that, gazing upon the crucified Christ, she may not forget the many brothers and sisters who are left at the mercy of violence. Also, for all those who find themselves in economically precarious situations, above all for the unemployed, the elderly, migrants, the homeless, prisoners, and those who experience marginalization. That the Church’s prayer and its active nearness give them comfort and assistance in hope and strength and courage in defending human dignity.”

Editor’s Note: The Diocese of Orlando held Eucharistic Adoration after the celebration of the 5:00 p.m. Mass at St. James Cathedral.