Why May is the month of Mary? 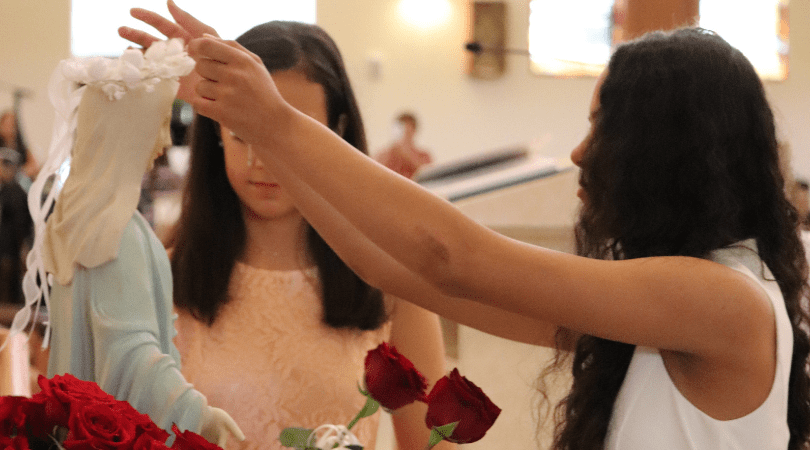 Catholic churches and schools throughout the world crown images of Mary, pray the rosary and special Marian novenas, and recognize Marian feast days, all honoring the Queen of Heaven and Earth. Today the Diocese of Orlando Catholic schools continues the tradition devoted to the Blessed Mother.

So when did May become the month of Mary?

Devotions to Mary have been a part of the church since the earliest of days — from early Eastern Church iconography to Pope Gregory XVI crowning of the image known as Salus Populi Romani, of our Blessed Mother holding the Child Jesus. Tradition holds that Pope Gregory replaced the crowns placed by Pope Clement VIII that were somehow lost, making crowning a popular way to pay homage to the Blessed Mother.

In medieval times, May was associated as the month of Mary, in part because May inaugurates the spring with its new life, rising out of the bitterness of winter – something hard to imagine if you only ever lived in Florida. That re-birth reminds the faithful of the hope of eternal life offered them by the birth of their Savior, Jesus Christ, whom Mary bore.

The month also marks various significant Marian feast days honoring the Blessed Mother: Our Lady, Queen of Apostles (the Saturday following the Ascension); Our Lady of the Most Blessed Sacrament (May 13); Our Lady of Fatima (May 13); Mary, Help of Christians (May 24); Mary, Mediatrix of All Graces (May 31); and the Visitation (May 31).

It is thought that toward the end of the 18th century, Father Latomia of the Roman College of the Society of Jesus (in Rome) instituted the practice of dedicating this month to our Blessed Mother, with the hope of promoting devotion to Mary among the students. From Rome, the May devotion spread throughout the Jesuit colleges, and eventually throughout the whole church. As Marian apparitions came to light throughout the 1800s in La Salette, France, to St. Bernadette in Lourdes, to the children of Fatima, and more, they served to affirm the great devotion.

In 2003, during the Liturgy of the Word concluding the Month of Mary, Saint Pope John Paul II addressed crowds gathered in the Vatican Garden. He said, “as the month of May draws to a close and the month of June, consecrated to the Heart of Christ, begins, we are even more conscious of how Mary leads us to Christ. She is the shortest path to the Heart of Jesus, from which we can draw the extraordinary gifts of his love and his mercy.”