Why this bill could be crucial for Iraq’s beleaguered Christians 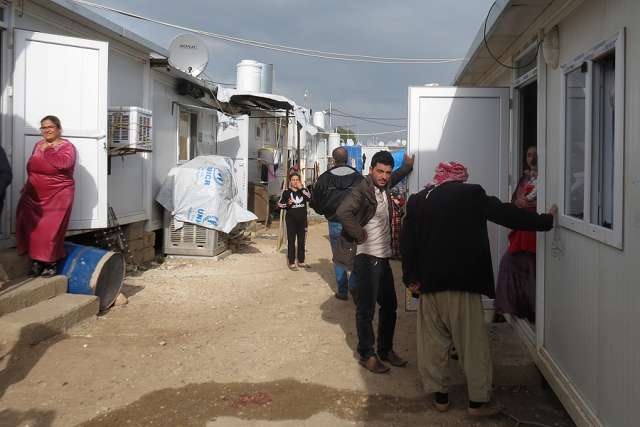 After a myriad of reports of United States humanitarian aid not reaching Christian genocide survivors in Iraq, their advocates in the U.S. are hoping that will change very soon.

“There is an emergency here,” Rep. Chris Smith (R-N.J.), chair of the House panel on global human rights, stated at a press conference on Capitol Hill on Wednesday regarding emergency relief for Iraq and Syria genocide victims.

“We’re not asking for new money,” he said June 7. “We’re asking to make sure the money that’s in the pot is provided to those who have been left out and left behind for about three years.”

After forces of the Islamic State swept through Syria and Iraq in 2014, the U.S. has sent humanitarian aid for the victims of the caliphate, who were driven from their homes by the hundreds of thousands. Many fled to refugee camps or have been living in temporary shelters, at risk of disease and malnutrition or starvation.

However, many Christians reportedly avoided refugee camps because of the security situation, and U.S. aid that was sent to the central government of Iraq or local governments has not reached Christians. There has been an “appalling lack of equitable distribution of U.S. humanitarian assistance when it came to the Christians and the Yazidis,” Smith said.

Thus, Christian genocide survivors in Iraq are almost completely dependent on NGOs and aid groups. The Knights of Columbus alone has sent over $12 million for their aid.

That money has been “squeezed to get every ounce of efficacy out of it to feed the hungry, clothe the naked, provide shelter, and of course to provide medicines,” Smith said.

However, the money from the private sector is “not enough,” he insisted, saying that Archbishop Bashar Warda of the Chaldean Archeparchy of Erbil has warned of “severe food shortages” if nothing is done.

Before Christmas, Smith toured the region around Erbil where many Christian families are living after they fled from the Islamic State.

“When I went to Erbil with my staff and a few other individuals, I can tell you I was shocked that we were not supplying the kind of assistance to these women, children, and men families,” he explained on Wednesday. He was told by the consulate that a camp for displaced persons a 10-minute drive away was unsafe to tour.

“It was not dangerous. It was filled with little kids and young families,” he said. “They had not even been there to do an assessment.”

So, Reps. Smith and Anna Eshoo (D-Calif.) co-sponsored a bill that passed the U.S. House Tuesday evening and is set to move on to the Senate, which would help ensure that the U.S. aid can go to churches and their auxiliaries that serve Christian refugees.

The Trump administration has reportedly signaled its support for the bill, the Iraq and Syria Genocide Emergency Relief and Accountability Act.

“The State Department would not allow any U.S. dollars to flow to church organizations. And this legislation allows for that,” Eshoo explained on Wednesday. “It is so essential to work with those that are on the ground who know exactly where the dollars should go.”

The money is there, Smith insisted, noting that Congress set aside a “huge pot of money” for beleaguered minorities in the recent omnibus bill. However, it has to reach the churches that are on the ground helping Christians.

A 2012 GAO report found that USAID had failed to show how it was fulfilling a 2008 mandate that funds be “provided” for aid to religious and ethnic minorities in Iraq during the war.

“I am still trying to track, through the GAO, dollars that the Congress appropriated many years ago at the height of the Iraq War,” Eshoo said. “And that all went through the State Department and their agencies, and we’re still trying to figure out where that money went.”

It is vital that more aid reaches Christians and other minorities in Iraq to ensure that they remain there, advocates insist.

Christians are examples of forgiveness and can help with the reconciliation process between different ethnic and religious parts of the region, and the preservation of minorities can help ensure “pluralism and stability” in Iraq, the Religious Freedom Institute explained.