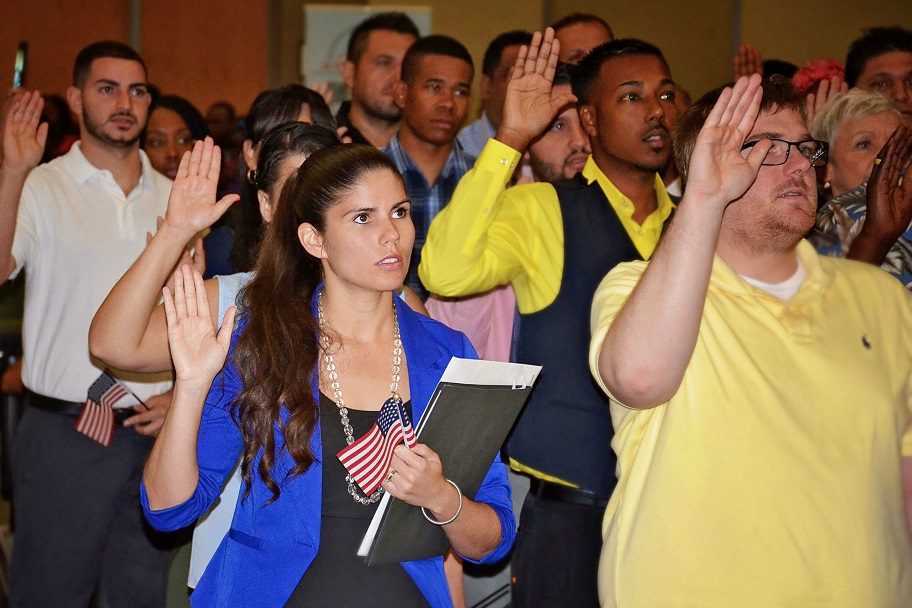 From eighteen different countries they came on June 24th, with a singular purpose—to take the oath of citizenship, the final step in becoming a U.S. citizen. The twenty-seven men and women represented a milestone for those who come to this country as refugees, asylum-seekers, and immigrants, completing a long and often difficult journey. The naturalization ceremony, held at Oak Ridge High School in Orlando, was part of the 2017 World Refugee Day event hosted by Catholic Charities of Central Florida along with other partner organizations serving the refugee community in Central Florida.  The event included dancing, music and food representing the countries and cultures of the refugee community.

Emcee Ingrid Delgado, associate for the Social Concerns and Respect Life Office of the Florida Conference of Catholic Bishops said, “World Refugee Day reminds us that refugees are courageous and resilient survivors of atrocious human rights violations. This event humanizes the plight of refugees by inviting the community to hear them share their personal resettlement journeys, join in welcoming the newest citizens of our community, and experience the richness of each other’s food, music, and traditions.”

“I was a refugee before I was born,” explained Zapheri, a seventeen year old from the Democratic Republic of Congo, to those who were gathered.  “I didn’t choose to become a refugee. My country was the victim of war and violent situations.  We wanted to go back home and live in peace.”

For Zapheri and his family, returning was not possible due to instability in their home country.  Even though his mother was weeks from giving birth to him, his mother, father and siblings fled Congo for the nearby country of Uganda, seeking safety from the violence.  “I grew up in the refugee camp, which was primitive at best,” says Zapheri.

In September 2016, Zapheri’s family was accepted for resettlement in the U.S through Catholic Charities of Central Florida in Orlando. Families like Zapheri’s are helped each year by Catholic Charities’ refugee resettlement program. Upon arrival, families are assigned a case manager, who greets them at the airport, and takes them to an apartment furnished from donations. The employable family members are assisted to find early employment, helping them become self-sufficient as quickly as possible. Families receive cultural orientation, to help them understand and integrate more easily into their new community, and are also assisted in connecting to other resources including public benefits and English classes.

According to the United Nations High Commissioner for Refugees website, there are approximately 65.3 million people displaced from their homes this year, due to war and persecution.  Only 1% of those who are displaced are offered resettlement in a third country. In the U.S., nine resettlement agencies are responsible for providing assistance to newly arriving refugees, including the U.S. Conference of Catholic Bishops who assists nearly 30% of all refugee arrivals in the U.S. through its affiliate network.

Pope Francis, who has become a leader in advocating for the care and support of refugees, calls for countries to better coordinate in the protection, integration and long term solutions for refugees. In his address on World Day for Migrants and Refugees 2017, Pope Francis reminds the world that, “Each person is precious; persons are more important than things, and the worth of an institution is measured by the way it treats the life and dignity of human beings, particularly when they are vulnerable, as in the case of child migrants.”

“We ask people to pray for refugees around the world, there are millions, that they have the opportunity to leave to start a new life,” said Deborah Cruz, director of the Comprehensive Refugee Services program at Catholic Charities. “We open our doors in Orlando to serving refugees and help them begin again. To see them using the bus, learning to write their names for the first time, buying a new home, having their own car, helping another refugee who just arrived, these are the things that fill us with joy, when we are able to see the fruits of what we do.”

If you would like to become a volunteer in mentoring newly arrived refugee families and youth, contact Carly Matthews, Manager of Mission Effectiveness at Catholic Charities of Central Florida: carly.matthews@cflcc.org