Gloria Russo believes that when the pope speaks, she should listen. That’s why she is taking the idea of a Year of Faith proclaimed by Pope Benedict XVI very seriously. 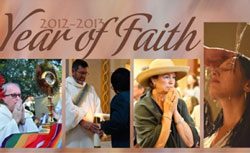 Gloria Russo believes that when the pope speaks, she should listen. That’s why she is taking the idea of a Year of Faith proclaimed by Pope Benedict XVI very seriously.

“The pope is our prophet. Everything the pope says is important. I am thinking about the Year of Faith and reflecting on how I can bring people to God and be renewed in my faith,” said Russo, parishioner of Resurrection Catholic Church, Winter Garden. She will also be attending the Diocese of Orlando Marian Congress on Oct. 12 and 13, a celebration which will inaugurate the Year of Faith locally.

Pope Benedict XVI proclaimed a Year of Faith that began on October 11, the anniversary of the opening of the Second Vatican Council. It continues until November 24, 2013, the Solemnity of Our Lord Jesus of Christ the king.

In doing so, he invites all Catholics to look at their own lives and recommit themselves to Christ and the Church he founded more than two thousand years ago. He also asks us to pause and reflect on the “value and brilliance” of the Second Vatican Council documents that are a source of renewal for the Church.

“The renewal of the Church is also achieved through the witness offered by the lives of believers… Christians are called to radiate the word of truth that the Lord Jesus has left us,” wrote Pope Benedict XVI in his Apostolic Letter, Porta Fidei (Door of Faith).

The Year of Faith also coincides with the 20th anniversary of the publication of the Catechism of the Catholic Church, which provides a summary of Catholic beliefs and teachings.

Bishop John Noonan hopes the Year of Faith will encourage Catholics to witness their faith not only on Sundays but throughout the week and throughout their lives.

“Model the virtues of your faith so that you might put the word of God into action. This calls us into a radical new integration of our faith and our work, known as the “New Evangelization.” We are all called to do the best possible job while praying for our humble efforts of living out our faith in our daily lives,” said Bishop John Noonan.

Parishes around the Diocese of Orlando have started to announce plans and events for this upcoming Year of Faith.

At Blessed Trinity Catholic Church in Ocala, Father Pat Sheedy has introduced a new page in the parish bulletin devoted to the Year of Faith to help parishioners better understand the faith we profess. He hopes the Year of Faith will bring about a “renewed enthusiasm for the faith journey.”

The new bulletin inserts will contain excerpts from the Catechism of the Catholic Church, the YouCat (Catechism for teens) and Second Council Vatican documents. Father Sheedy writes and compiles the information himself and has already created 30 inserts to be used during the next several months.

At St. Thomas Aquinas Catholic Church in Bartow, a new class will be offered every Thursday to explain the text and just as important – the context of the Sunday Gospel passages.

“Better knowledge of Sacred Scripture will allow people to live the Gospel more closely and to understand what it means to their lives,” said Father Eugene Grytner, SDS, pastor.