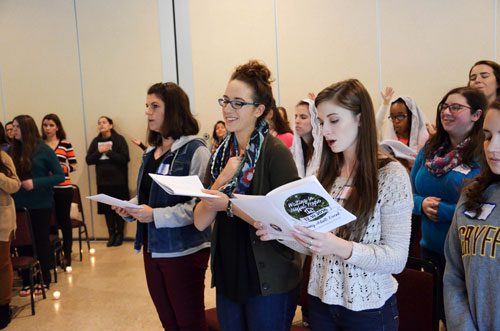 The liturgical season of Advent is one of waiting and preparing for the birth of Christ. It is a season of the Church that especially resonates with a season of life for many young adults who often find themselves discerning and preparing to begin their careers or vocations. “Waiting in Joyful Hope”, a young adult retreat held at Annunciation Parish in Altamonte Springs on Dec. 10 gave an opportunity to reflect on that experience and to learn how to discern God’s will and prepare in the Advent season.

Bishop John Noonan joined 75 young adults for the celebration of Mass at the retreat where he spoke about Elijah returning his people to God and John the Baptist preparing the way of the Lord.

“We too are preparing for the birth of Christ, not just a physical preparation but a spiritual preparation,” Bishop Noonan said. “Some of us want to serve God with our lives. All of us can and will let the Lord be our guide.”

Savanna Shurman, who belongs to the Catholic Campus Ministry at the University of Central Florida, will be graduating this year. She prays that young adults are able to hear the cry of the Lord like Elijah and John the Baptist. She said she has found joy in waiting in a stressful and uncertain time as she begins to take the next step in her life by surrendering in daily prayer to God.

“I give You permission to work in my life and be an instrument” Shurman prays daily. “I know that He promises through Scripture that He will give us a future with hope,” she said as she recalled Exodus 14:14, “‘The Lord will fight for you; you need only to be still.’ Jesus Christ is the way, the truth and the light.”

Stephanie Hernandez, a member of Holy Cross Parish in Orlando, said she attended the young adult retreat as she is trying to discern what God is calling her to do in her own season of waiting.

“I hope to find his calling, to be able to listen to Him and hear His words and be closer to Him,” said Hernandez, who hopes one day to be married and have children.

Keynote speaker Tony Marco, Catholic campus minister at the University of Central Florida, spoke about discernment not only for the priesthood or religious life but also to marriage and inspiration and transformation of our daily work.

“Discernment is an art form not a mathematical equation,” Marco said. “It is a gift from God to be able to discern what he is calling us to do in our lives.”

Marco explained that the number one prerequisite for discernment is that the discerning person is a praying person with the ability to listen for God’s voice and to act on it.

Father Benjamin Lehnertz, parochial vicar at Holy Family Parish in Orlando, spoke about preparing to receive the Lord’s will as we prepare our discerning hearts this Advent season. He said it is easy to be distracted during Advent, in the same way one may become tempted in the supermarket checkout aisle with impulse buys. In this season of waiting, Father Lehnertz said we need to put Christ in the center of everything and falling in love with Jesus is always the call.

“Examine your life but don’t do it on your own,” he said. “Don’t examine with the eyes of the world but with eyes of faith.”

“For us, waiting isn’t about entertainment and distraction, but that there’s purpose in every season of life,” he said. “It’s a time for all of us to remember Christ’s first coming and know he will come again and to focus on joyful preparation for His second coming.”