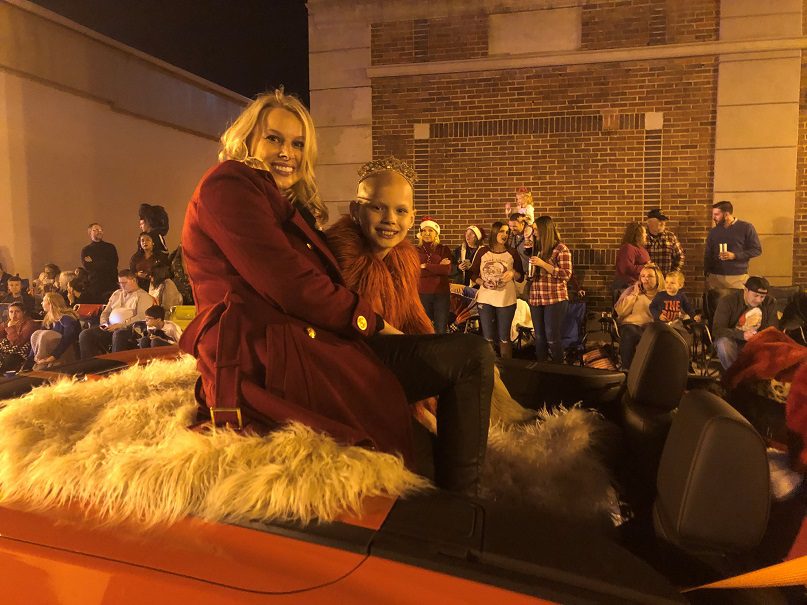 Andrea (left) accompanies her daughter Laney in the Lakeland Christmas Parade. Laney was selected as Grand Marshal for her essay on The Ugly Duckling. (MARIA DEL AMO)

LAKELAND | Fairy tales teach lessons about virtues and character. One student’s love for Hans Christian Andersen’s “The Ugly Duckling” not only taught her how to appreciate people for who they are, but garnered her the honor of Grand Marshal in the Lakeland’s Annual Christmas Parade, Dec. 6.

Laney is a fifth-grader at Resurrection Catholic School in Lakeland. When the Junior League of Greater Lakeland held an essay contest to determine who would be the Lakeland Christmas Parade Grand Marshal, Laney jumped at the chance. For the essay contest, called “A Storybook Christmas”, Polk County students in first through fifth grade were asked this question: If you were in charge of decorating a float for the Christmas parade, what storybook would you select to inspire your float, why that book and how would you decorate your float? Laney knew immediately about what book she would write.

“I would love to inspire my float with The Ugly Duckling story because he is special and he gets made fun of a lot,” she wrote in her essay. “I would decorate my float using a beautiful swan. I would make him the most special one and make him beautiful! ‘I’m a swan,’ the Ugly Duckling cried happily! The people of Lakeland will say, ‘Look at the beautiful Swan!’”

The 10-year-old’s wisdom reflects that of someone far more mature in age. “I have chosen this book because you can be beautiful just the way you are. It doesn’t matter what others think about you. Being different is hard, but really good in other ways,” she wrote. “My float would be a huge swan with a crown. There would be bubbles and feathers everywhere and it would encourage others to ‘Just Be You.’ Like the book says, ‘I always knew you were special,’ mother duck quacked.”

The story celebrates the beauty of each individual and Laney says it was always her favorite. Laney was diagnosed with diabetes a year ago and lost her hair at age 3 from an unknown autoimmune disease, while in preschool. That’s when her mother, Andrea, read her the story from Aesop’s Fables “as a lesson indeed”, explained Andrea. “The ugly duckling personified that sometimes what others believe as ugly or different is actually the most beautiful and special of all. That’s how I see my Laney,” she added.

The self-confident youth learned the lesson well and frequently wears a tiara rather than a wig. She has more than 20 tiaras – all in gold, silver and pink. After losing the only one she had, her mother decided to ensure the ordeal never happened again.

“My mom always said it doesn’t matter what you look like—that God made you and everybody, and God didn’t make anything ugly,” said Laney. Repeatedly, Christ teaches that inner beauty is true beauty. He even refers to Himself, through the prophet Isaiah’s words, as one who has “no form nor comeliness”, “no beauty that we should desire Him”. Laney gets it.

Her school principal, Deborah Kraus Schwope, agrees. “Laney possesses the ability to be comfortable with who she is and her beauty radiates from within,” she said. “Students in her class are very protective of her, should anyone comment on her lack of hair. They see Laney as another fifth-grader and fail to notice that she looks different. Her personality is so vivacious that it exudes and welcomes friends into her charms.” They truly see her for who she is.

So on Dec. 6, as temperatures dropped, Laney, Mickey Mouse, Minnie Mouse and Santa exited the R.P. Funding Center where the parade began. Laney mounted the orange Chevrolet Camaro convertible with her name draped on its side, and offered her best pageant wave as she presided as Grand Marshal, sitting next to her mother. “She had the best time ever,” her mother noted. “She didn’t want the night to end.”

Her sister, Saylor, 15, who will attend Santa Fe High School next year, stood cheering along the parade route with her father, David. Several floats behind her, school friends rode a Catholic schools float including students from Resurrection, Santa Fe Catholic High School, St. Joseph Catholic Academy in Lakeland and St. Joseph Catholic School in Winter Haven. It will long be remembered that at this year’s Lakeland Christmas Parade, a young lady taught many about the beauty of being human, and what it looks like to be created in the image and likeness of God.

By Glenda Meekins of the Florida Catholic – December 7, 2018