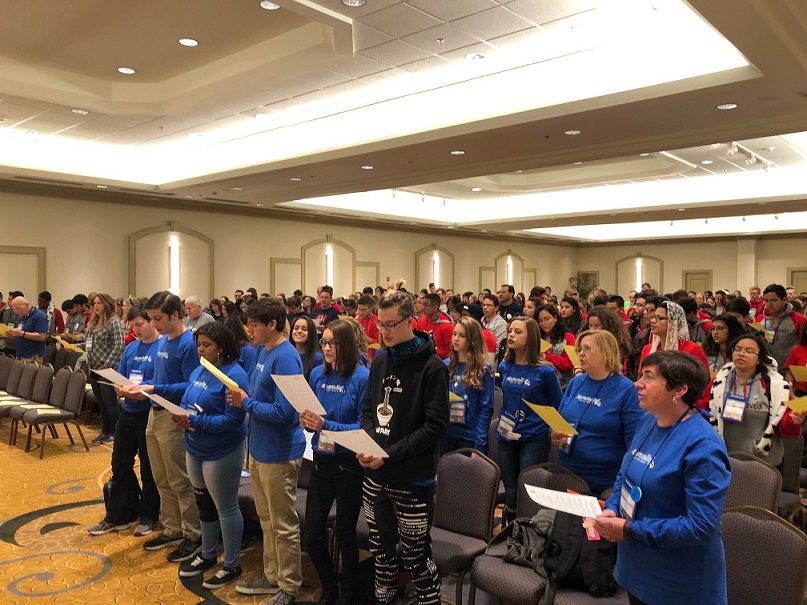 22,000+ young Catholics from across the nation share their faith in Indianapolis at the National Catholic Youth Conference (NCYC), November 16-19. (COURTESY PHOTO)

ORLANDO | Traveling in matching “hoodies” and neon orange-slice foam hats, 183 teens from the Diocese of Orlando, joined 22,000+ young Catholics from across the nation, in Indianapolis for the National Catholic Youth Conference (NCYC), November 16-19. Accompanied by 67 chaperones and 10 priests, the teens from 18 parishes experienced the youthful pulse of praise music, powerful witness talks and opportunities to serve and grow in their faith.

“It’s a pilgrimage really,” says diocese NCYC co-coordinator Jennifer Chellberg, Coordinator of Young Adult/Youth Ministry at Nativity parish in Longwood. “At NCYC, Lukas Oil Stadium becomes a holy place. This is a great way for the young church to see other young people living their faith.”

The theme this year, “Called/Llamados” could be heard throughout the conference in different talks convincing teens they are called to serve, called to pray, called to more. Keynote speaker Chris Stefanick encouraged teens saying, “We speak words to ourselves that tear us to shreds. You have forgotten your dignity as God’s child. You have a crown and don’t even see it. Tell yourself the truth!  Don’t listen to the accuser, listen to the advocate, the Holy Spirit. You are chosen, called by name.”

The teens heard the powerful story of a young refugee from Sudan whose family ran from people who tried to kill her father when he would not renounce his faith. They also heard the witness of Sister Miriam Heidland, S.O.L.T., a former Division 1 volleyball player who spoke about the brokenness she experienced until she found authentic love and the healing power of Christ. “God has a fierce, tender love for you,” says Sister Miriam. “The events in your life are pages, turn the page.  Keep writing your story.  The bad things are not the end of your story. He wants your excellence, your greatness.”

For Arianna, a high school junior from Good Shepherd parish in Orlando, the newly added bilingual aspects at this year’s NCYC made it a different experience. “As a Hispanic, being Catholic is a huge part of our culture. This year (at NCYC), they incorporated more Spanish in the readings, the music, and speakers. It really enhanced the experience for me and for our youth group since most of us speak Spanish. It really hit home.” Arianna and her youth group raised money for 2 years to attend the conference.

Michelle Wille from Nativity chaperoned 14 teens from her parish including her son. “It was impactful to them how we are called to serve,” explained Wille. “They want to figure out how to serve in their local community and be helpful and change someone else’s lives. They also really related to young speakers who said they don’t have to be the same person they were yesterday, today is a new day and yesterday does not define them.”

“We hope this experience will lead teens to a closer relationship with God,” says Gayle Zambito, Director of Youth/Young Adult Ministry at Holy Family in Orlando. “That they will then take the experience back to share that fire with their parish. Maybe it will give some the courage they need to discern a vocation, or draw them into a place of silence where they can hear what God is calling them to do.”

“It has been a life changing experience,” says Jay from Nativity youth group, who attended for the first time. “Hearing all the speakers, their life situations, and how their faith has gotten stronger while being involved in church, has helped me get closer in my faith.  It’s a great feeling to know all those people believe in the same thing, all those people in one place being one big family to praise the Lord.” Jay plans to share that passion with his peers. “I want to tell people about this amazing experience and speak out the truth, tell people to go to Mass and experience the body and blood of Christ, and what it means to be Catholic, that it’s important to be engaged to help people.”