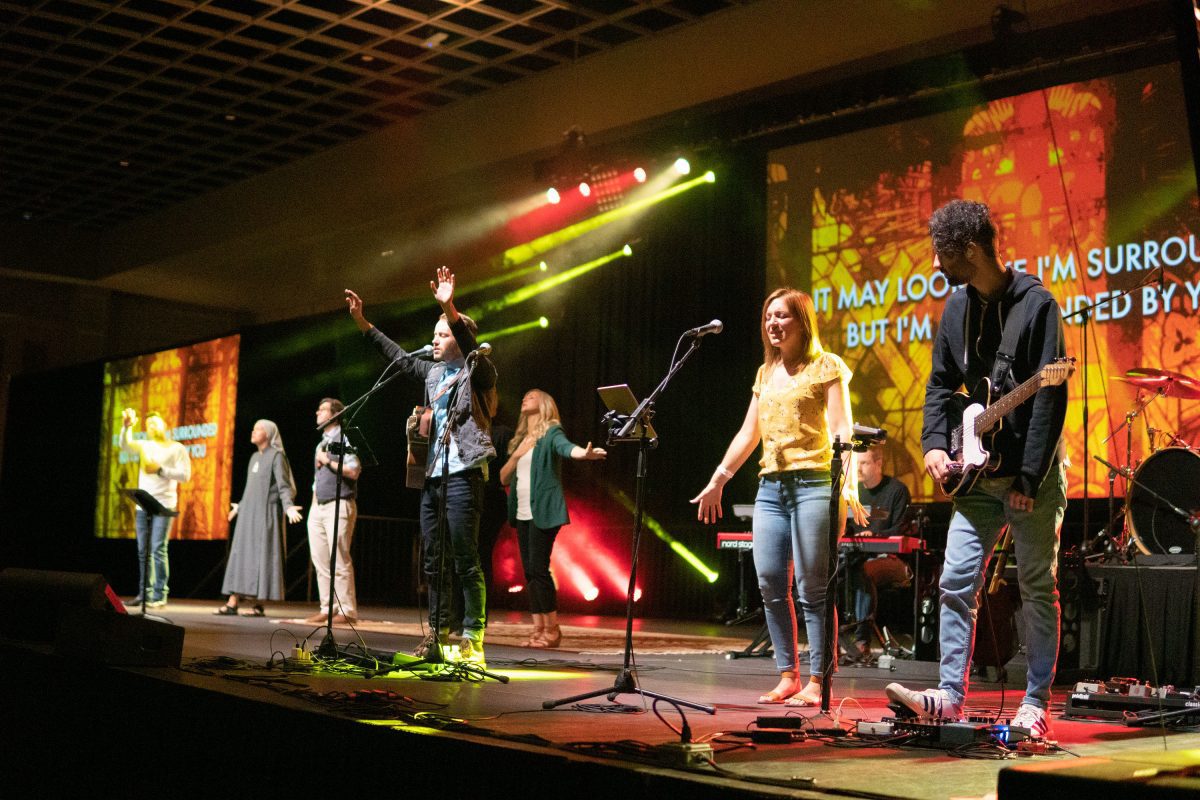 ORLANDO | Students from all over the Diocese of Orlando allowed God’s presence to touch and change their lives at this year’s Steubenville Florida Conference. The conference at the Rosen Shingle Creek hotel, attracted more than 2,000 youth from around the state. Based on 1 John 3:1, the conference team presented talks, music and activities related to how we belong to Christ.

“See what love the father has bestowed on us, that we may be called children of God,” (1 Jn 3:1). The message was heard loud and clear. Nilda Sanchez-Lugo, faith formation and youth director at Holy Redeemer Parish in Kissimmee, says “The (Steubenville) conferences put youth in a place where they see they’re not alone in the world. They can make those connections and see outside of themselves.” As an example, she noted their experience of Eucharistic Adoration. “When we’re in our parish, we’re in our own little bubble. We do Adoration at our own parish, but Adoration here was eye opening for all of them. A lot of my kids were new to Steubenville this year so … When they saw it was a stadium room, and there were lights and all these kids were feeling the same thing, it was a connection they didn’t know existed.”

That connection has a profound effect on many who attend. Holy Redeemer youth participant, Alicie, age 17, said, “I like the fact that it’s just youth there. Everyone there is a part of their own youth group at their church and they’re also here to become closer to God. It allows, not only me, but everyone else to be vulnerable, seeing as the majority of the people in the room are going through the exact same thing you might be going through.”

She said, when she first went to Steubenville last year, she believed she was strong in her faith. Yet she admits she was still somewhat embarrassed to express herself freely, which kept her from fully allowing the Lord to work in her. “This time I was definitely a lot more vulnerable. I just kept my eyes closed and did whatever my heart wanted me to do.

“Now I’m more likely to talk about God more often. If my friends aren’t part of the faith… and they say something about Catholicism, now I’m more inclined to say something. If they happen not to believe in God, now I can try to convince them otherwise or at least teach them why I love God so much.”

That encounter with God also helped embolden her sister, 16-year-old Rebecca. Returning from last year’s conference, both spoke of their experiences. The youth group doubled in size thanks to their witness and those of others. “When I realized I was doing my job evangelizing for Christ, it became a lot more special to me. Steubenville made it a lot easier for me to speak of my experiences and about Christ because my experiences brought me closer to God and I wanted everyone to know that kind of feeling.”

This year, Jorge, a rising senior, attended Steubenville’s Franciscan LEAD program the week prior to the conference. LEAD stands for leadership, evangelization and discipleship. Jorge says, “You learn a lot of tools for your faith.” It often translates to more responsibilities in one’s youth group afterward. LEAD affected his Steubenville experience this year. “Last year it was about me really diving into my faith.” This time, he wanted to take what he learned at LEAD and really help other attendees understand the presentations. “Rather than praying for myself, I spent a lot of time praying over, not just my own youth group, but all the people there – that they might get the experience that I was already blessed to have.

“Going back to the youth group, I think I’m in a great position, because of my age, and the gifts I’ve been given by God to really bring the youthfulness there.” He hopes to bring his guitar and praise and worship music to “bring them alive in Christ as we get stronger and closer—digging really deep into the beautiful things about our faith, like the Mass, the Eucharist and why it’s the body and blood (of Christ),” he said.

“One of the great things about LEAD is that I came there thinking about a lot of other things – other people, other relationships. The first day, I really sensed God put it down to me to work on myself, and then go out to other people… if they’re not into the faith, to move them toward God… if they are, to make that love even deeper and stronger.”