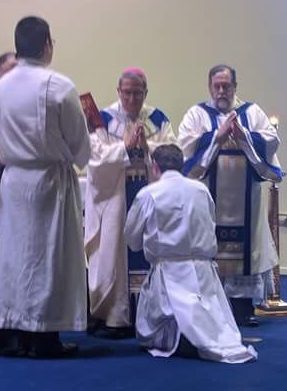 On February 24, 2018, at the Church of the Resurrection in Lakeland, Florida held a Mass for the diaconate ordination of Deacon Jean Pierre Espinoza. The Mass and ceremony were spoken and sung in Spanish. It was a beautiful and moving experience filled with wonderful music for all who attended.

Deacon Espinoza grew up in Peru and now practices law in Lakeland. He was always involved in the church. He said, “When I was a teenager, I got involved with a community in my parish in Peru. These are the Neocathechumenal Way communities. These communities do a long version of the Easter Vigil. The vigil begins at midnight until about 6 a.m.”  It was during this vigil several years later when he heard God reach out to him. “I was on my third year of law school (in Peru law school is six years). In the middle of the Easter Vigil I felt a deep encounter with the Lord. It was a voice inside inspiring me to trust and believe. I did not want the vigil to end. I felt like the Apostle Peter in the Transfiguration: ‘Jesus, let’s put some tents and remain here.’ So when I finished the third year of law school, I entered the seminary to study philosophy.”

The ceremony, called Rite of Ordination for the Order of Deacon, begins immediately following the gospel. It began with the “The Election of the Candidate”. This is where, now Deacon Jean Pierre Espinoza, was presented to the Bishop Pedro Alberto Bustamante Lopez of the Diocese of Prelado de Sircuani, Peru for ordination and someone testifies that he is properly prepared and ready for ordination. After the homily, he made promises to be obedient to the bishop and the bishop’s successors.

A moving part of the ceremony occurred when Mr. Espinoza lied on the floor while the Litany of Supplication was sung asking Jesus for mercy and for St. Mary, the angels, and all the saints to pray for the elect and to help him guide the church.  Next, the elect knelt in front of the bishop who laid his hands on the elect’s head and prayed the Prayer of Ordination over him. This is where he was ordained a deacon.

After the ordination, Deacon Espinoza was dressed in the wardrobe of a deacon. The bishop then handed him the Book of the Gospels and told him, “Receive the Gospel of Christ, whose herald you now are. Believe what you read, teach what you believe, and practice what you teach.” Deacon Jim Spindler, also of Resurrection Parish, said he often reflects on these words spoken to him at his own ordination. He elaborated, “I think of these words often as I read the Gospel at Mass or when I prepare and deliver a homily. It reminds me how important that role is and how much the bishop, the priest, and the laity rely on us to properly read and preach accurately on the Gospels.”

Deacon Spindler said the ceremony brought back very special memories for him. “It brings back the nervousness and the anxious sense of anticipation that I and the other five men had the night before and the morning of our ordination. It brings back the memories of lying on the cathedral floor for what seemed to be a long time. I remember when Bishop Noonan placed his hands on my head and prayed the prayer of ordination, how I felt tingles going down my spine. I remember how my wife, Father Matt Mello (Resurrection’s pastor at the time), and my deacon mentor, Deacon Tony Martinez, helped dress me with my new vestments. Finally, one of the biggest memories is how happy my family, the people who attended the ordination, and the people of our parish were after the ordination. There was a great sense of joy.”

The final part of the ordination rite occurred when all the deacons present gave Deacon Espinoza a sign of peace and welcomed him into the Order of Deacons.

While Deacon Espinoza looks forward to helping guide the church in the future along with his fellow deacons, he said. “I felt very touched and humbled when I laid down on the floor and the Litany of the Saints was chanted. I believe I will always remember this moment.”