From the time he was a little boy, Father Carlos Bedoya dreamed of becoming a priest. The fourth of Humberto and Nidja Bedoya’s 10 children, Father Bedoya had a way of convincing even his older siblings that playing Mass was fun, and he would always be the priest. 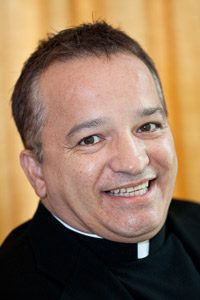 From the time he was a little boy, Father Bedoya dreamed of becoming a priest. The fourth of Humberto and Nidja Bedoya’s 10 children, Father Bedoya had a way of convincing even his older siblings that playing Mass was fun, and he would always be the priest.

God’s calling remained strong in his heart throughout the years and at the age of 13, Father Bedoya entered St. Pius X High School Seminary in Colombia. After graduating from high school, he moved to the United States and spent the next three years discerning his call to the priesthood.

“I had felt the calling since childhood, but I had to take time away to make sure this was truly what God wanted me to do,” Father Bedoya said in an interview shortly after his ordination. “The time away was very good for me because it made me realize that becoming a priest was more than a childhood dream.”

Father Bedoya studied at St. John Vianney College Seminary in Miami and at St. Mary’s Seminary in Baltimore. On Dec. 1, 1990, among a congregation of family, friends, priests and deacons, Father Bedoya was ordained into the priesthood by Bishop Norbert Dorsey at St. James Cathedral in Orlando. The event was made even more special in that Father Bedoya was the first seminarian ordained by Bishop Dorsey, who had been installed as the third bishop of the Diocese of Orlando just two weeks prior.

During the past 25 years, Father Bedoya’s ministry has taken him throughout the diocese. In addition to serving as assistant director of vocations early in his priesthood, he has also served at St. James and St. John Vianney parishes in Orlando, Our Lady of Lourdes Parish in Daytona Beach, St. Ann Parish in Haines City, and St. Francis of Assisi Parish in Apopka. In 2006, after serving one year as parochial administrator of St. Clare Parish in Deltona, Father Bedoya was named its pastor and still ministers there today.

Reflecting on his years in the priesthood, Father Bedoya said, “When I was young, I was inspired by the priests who served in my parish. I hope I have brought that to my parishioners as well. The greatest joy of my ministry has been serving the people of God and bringing them the Sacraments.”

As for those discerning God’s call today, Father Bedoya offered this advice: “Listen to the words of the Lord and answer his call. The Lord is calling people today, but many are not listening. I urge young men to listen and respond to God’s call.”