Father David Vivero grew up in a family, steeped in the Catholic faith. Born in 1962 in Caloocan City, Philippines, the second of David and Rosario Vivero’s four children, Father Vivero knew at an early age that he wanted to be a priest. 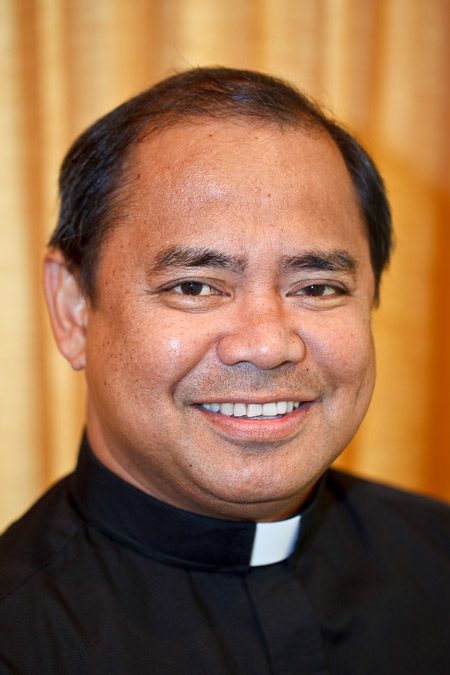 Father David Vivero grew up in a family, steeped in the Catholic faith. Born in 1962 in Caloocan City, Philippines, the second of David and Rosario Vivero’s four children, Father Vivero knew at an early age that he wanted to be a priest.

“There is no doubt that my vocation is attributed to the religiosity of my parents and their deep respect for the Church and the clergy,” Father Vivero said. “I knew I wanted to become a priest at the early age of 13 when I entered Sacred Heart Seminary in Palo Leyte (in the Philippines). What I didn’t realize is how long it would take me to become one.”

Father Vivero spent his high school and early college years at Sacred Heart Seminary, ultimately earning his undergraduate degree in philosophy. He continued his education at the San Carlos Major Seminary in the Archdiocese of Cebu, where he studied under the priests of the Congregation of the Mission (C.M.), commonly known as Vincentian fathers. There he completed five years of theological studies and spiritual pastoral formation.

On April 3, 1990, Father Vivero was ordained into the priesthood for the Archdiocese of Palo. He served as a parochial vicar in three parishes before being appointed director for the Youth Ministry and Social Action Services by Archbishop Pedro Dean, a position he held for two years before coming to the United States in 1996 to join his parents, who now call Florida their home.

Shortly thereafter, Father Vivero was appointed to St. Mary Catholic Church in Rockledge, where he served as parochial vicar for four years until arriving at St. Teresa Catholic Church in Belleview, where he now serves as pastor. Under his leadership, the parish has continued to flourish. In November 2014, the parish broke ground on a new and larger church building.

Father Vivero said the past 25 years as a priest have been a blessing.

“I never realized I would have to undergo a series of discernment after discernment even after my ordination, because the truth about God’s life and love molded in my vocation is real and necessary,” he said. “The best thing about my vocation to the priesthood is that the more you ponder and share about Jesus Christ our High Priest, the more you get close, understand and desire to be more like Him and in Him.”

“What is clear now, after 25 years, with all the learning experiences, candor, honesty, joys and rewards and even frustrations of this special life, is that I am ready to do it again.”