Father Karl Bergin, pastor of Our Lady of Lourdes Catholic Church, has been named the 2015 National Catholic Educational Association’s (NCEA) Distinguished Pastor Award, presented by the NCEA Elementary Schools Department. The prestigious award is given to honor pastors who have given outstanding support to Catholic elementary education. 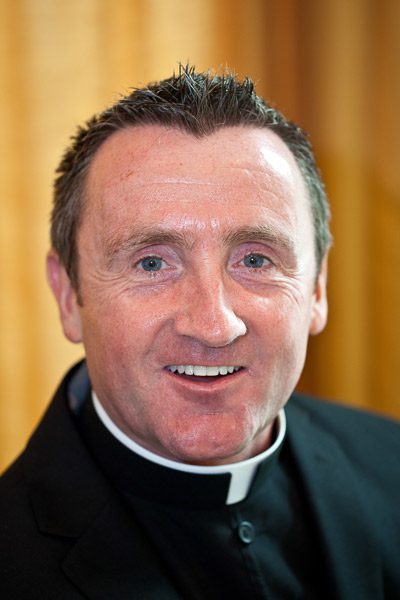 Father Karl Bergin, pastor of Our Lady of Lourdes Catholic Church, has been named the 2015 National Catholic Educational Association’s (NCEA) Distinguished Pastor Award, presented by the NCEA Elementary Schools Department. The prestigious award is given to honor pastors who have given outstanding support to Catholic elementary education.

Father Bergin, as well as 11 other priests from across the nation, will receive their awards at the NCEA 2015 Convention & Expo awards banquet on Tuesday, April 7, at the Hyatt Regency Orlando Hotel. The Diocese of Orlando Office of Schools is hosting the NECA national event, April 7-9, at the Orange County Convention Center.

“I accept this award on behalf of the Catholic education community in Melbourne and also on behalf of my parish community,” he said. “For parish to have a Catholic school, it definitely needs the support of the entire community.

“The people of Our Lady of Lourdes embraces the school as a ministry and are proud of the school and its accomplishments,” he continued. “This is a great honor for the parish and Catholic education here is South Brevard.”

Donna Witherspoon, principal of Our Lady of Lourdes Catholic School, said Father Bergin, who also ministers as chaplain at Melbourne Central Catholic High School, epitomizes the very essence of Catholic education. His positive energy and devotion to the school is contagious, and it reaches out into the parish community.

“Father Karl has a way of relating to the children, regardless of age, on their level and through experiences,” she said. “His presence at the school and his ability to greet the children by name shows that he cares about the students and their growth in their faith.”

While today the school boasts an all-time high enrollment of 224 students, such was not the case prior Father Bergin’s arrival in 2010. In fact, the school was on the brink of closing. Father Bergin worked diligently to bring the parish and school together as one community.

“Over the past several years, the school has changed in so many positive ways, and Father Karl has been the leader or motivator of these changes,” said Adrienne Stewart, a mother of two children at the school. “His positive, upbeat and honest approach has instilled a newfound pride in the school and community.”

Catholic education is a priority to Father Bergin and encourages his parishioners to make it a priority in their lives as well. David Lammeier, a former OLL student, a school board member and now a parent, said Father Bergin done an exceptional job in guaranteeing every Catholic child within the schools reach receive a Catholic education, despite their financial or special needs.

“He has made it a personal mission to ensure this guarantee by challenging parents to take him up on this offer and reminding parishioners of our Catholic obligation as stewards of Christ to support Catholic education,” he said in his nomination form to the NCEA.

Father Bergin is not shy in asking parents who do not have their children enrolled in OLL when their children will begin attending the school, Lammeier added.

“Father Bergin has an extraordinary way of reaching all spirituality,” Witherspoon said. “He is a shining example of the true mission behind Catholic education.”