Catholic education has been at the forefront of Father Patrick Sheedy’s priestly ministry. Throughout his priesthood, he has ministered at parishes with Catholic schools and been actively involved in bringing Catholic education to many families. 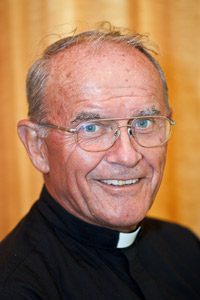 Catholic education has been at the forefront of Father Patrick Sheedy’s priestly ministry. Throughout his priesthood, he has ministered at parishes with Catholic schools and been actively involved in bringing Catholic education to many families.

“When we grew up (in Ireland), all we had was Catholic education,” said Father Sheedy, who serves as pastor of Blessed Trinity Parish in Ocala. “In my mind it was not natural to go to a school that was not part of your religion. To me, your faith, your education and all of your upbringing should be integrated.”

Father Sheedy grew up on a farm in Ireland, the fourth of 12 children. As a boy, he dreamt of running the family farm; however, God had other plans. When his father gave that job to his younger brother, Father Sheedy decided to follow in the footsteps of his three uncles, who were priests, and three aunts, who were religious sisters, and, at the age of 17, entered the seminary.

On June 13, 1965, Father Sheedy and his brother, Michael, were ordained to the priesthood in Clare County, Ireland –and then soon after Father Sheedy arrived in Florida. The occasion was made even more memorable as it was also the date of their parents’ wedding anniversary.

Father Sheedy has served in a number of parishes and schools throughout the Diocese of St. Augustine, Diocese of Orlando and other parts of the country. In addition to Resurrection Parish and Bishop Kenny High School, both in Jacksonville, and the Catholic University of America in Washington, D.C., he has served at Our Lady of Lourdes Parish in Daytona, St. Charles Parish in Orlando, and St. Joseph Parish in Lakeland. In 1988, he was assigned to Blessed Trinity, where he has emphasized stewardship as a way of life and played an instrumental role in the founding and building of Trinity Catholic High School.

Under his guidance, participation in faith formation and Catholic education programs has surged at Blessed Trinity; the parish began offering Perpetual Adoration, a ministry that continues 20 years later, as well as day care and elder care services.   The faithful also welcomed three sisters from Uganda, who not only minister to the people of the parish and school, but also to the poor of the community under the parish’s Brother’s Keeper ministry. In addition, the parish established the Guadalupana Mission.

Looking back on the past 50 years, Father Sheedy said, “Our biggest responsibility as priests is not to get in God’s way. So many things happened in my life because of my priesthood that I would have never dreamed of. I have been involved with refugees, in prison work, and now in the stewardship way of life. Everything just seemed to happen, and it was not anything I did. It was God’s hand at work and I latched on to it.”