Missionaries of Our Lady of La Salette Father Stephen Krisanda, parochial vicar at Good Shepherd Catholic Church in Orlando, died peacefully at St. Mary’s Villa in Elmhurst, Pa. on June 22. He was 82. 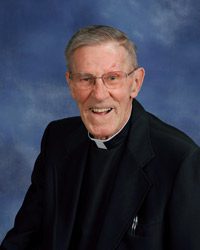 Missionaries of Our Lady of La Salette Father Stephen Krisanda, parochial vicar at Good Shepherd Catholic Church in Orlando, died peacefully at St. Mary’s Villa in Elmhurst, Pa. on June 22. He was 82.

Known for his keen sense of humor and engaging personality, Father Krisanda will be remembered as a kindly priest who served as a missionary to the people of Argentina for 25 years.

“His heart was with the Hispanic people of Argentina,” said Father Terry Niziolek, m.s., parochial vicar at Good Shepherd. “When he returned to the United States, he continued to minister in Hispanic communities and even in retirement would often visit the sick in their homes.”

Father Krisanda was born Aug. 1, 1932, in Jessup, Pa. to the late Lawrence and Catherine (Kromko) Krisanda. At the age of 16, he entered La Salette Seminary in Hartford, Conn., where he completed high school.  Explaining his early call to the priesthood, Father Krisanda said in an interview during the celebration of his 50th jubilee, “God works in mysterious ways. He put in my heart a love for the Church and the Mass and the Sacraments.”

Father Krisanda entered the Novitiate of the Missionaries of Our Lady of La Salette in Bloomfield, Conn. on July 1, 1952 and made his first vows on July 2, 1953. After completing his studies in the La Salette seminaries in Bloomfield, Conn. and Ipswich, Mass., as well as the Gregorian in Rome, Italy, he was ordained to the priesthood on May 28, 1960, in Ipswich by Auxiliary Bishop Thomas Riley.

Throughout his priesthood, Father Krisanda served primarily as a missionary in South America. He came to the Diocese of Orlando in 1996, where, with the exception of three assignments in Georgia, Connecticut and Massachusetts, he ministered to the people of Good Shepherd Catholic Church. There, he will be remembered as finding every aspect of his priestly ministry, especially the celebration of the Mass and the opportunity to visit and comfort the sick, fulfilling.

A funeral Mass will be celebrated on June 26 at Queen of Angels Catholic Church in Jessup. He will be buried at St. Michael Cemetery, also in Jessup.

The faithful of the Diocese of Orlando are invited to participate in a bilingual Memorial Mass, Tuesday, June 30th, at 7 p.m. at Good Shepherd Catholic Church, 5900 Oleander Dr., Orlando.