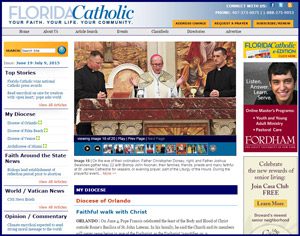 The e-news blast put out each Wednesday for more than 3,000 subscribers in the Archdiocese of Miami won second place in the competition which is sponsored annually by the Catholic Press Association.

The Catholic Press Association also awarded a first place for feature writing to Linda Reeves, editor of the Florida Catholic Palm Beach edition, and a second place for personality profile by Jean Gonzalez, editorial/online director in the Orlando office.

The judges described Reeves’ piece, “Local farmworker attends meeting: Give thanks for farmworkers,” as a “very touching story that engages the reader, expands their understanding of American agriculture and the American marginalized while highlighting the humanity in both.”

Gonzalez’s work, “You cannot release a man from the grave,” focused on a former Death Row inmate who spoke at the statewide Respect Life Conference in Tampa last October.

The judges called Gonzalez’s profile “excellently written. The story grabs the reader’s attention and nicely details the subject and his struggles and perseverance.”

The newspaper — which publishes biweekly editions for the dioceses of Orlando, Palm Beach and Venice — also won awards for advertising and circulation promotion.

The judges said the campaign was “an exceptional entry in this category… Entrant used a strategic approach in using a great variety of promotional materials and maintained a consistent design and messaging throughout… Campaign also used a great mix of traditional (print, direct mail, etc.) and digital promotion (email, website, etc.). Well done and results indicate effectiveness.”

Designer Michael Jimenez’s “Florida Mobility ad” won third place for best single black and white ad originating with the publication. The judges said the ad was well organized and included a coupon that provides “a good call to action and will help measure response rate to the ad.”