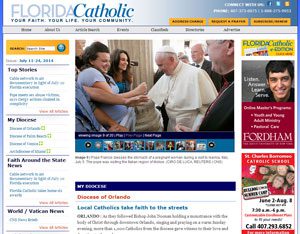 In advertising, the Florida Catholic won second place for its media kit. Honors went to Jane Radetsky, Susan Chronowski, Michael Jimenez and Pat Spencer. This is the second year in a row the media kit garnered second place. Judges described the entry as, “Clear and brief = good, like a math problem.”

The winning entry was the paper’s four-page promotional section published in November for the Florida Catholic’s 75th anniversary. Judges described the entry as, “A good spectrum of promotional pieces carrying a clear message of the publication’s history and intended future.” The Florida Catholic continues to publish its 75th anniversary pages with each edition (see Page 7).

The two writing awards went to longtime writers of the paper. Linda Reeves, bureau editor for the Palm Beach edition, won honorable mention for best feature writing for her story, “A Place to Call Home,” about the Jorge Pettit Hospitality House in Fort Pierce, opened under the mission of the Catholic Worker movement. Judges said, “Almost poetic-like prose captures the essence of the Dorothy Day mission. Article wonderfully weaves different aspect of the mission into one seamless narrative.” Reeves has been at the paper for 10 years.

Gonzalez picked up second-place honors in personality profile for her article on Susan and Dale Recinella and their ministry to the incarcerated. Judges said of the story, “Couple’s ministry in prison settings is an extraordinary facet of death, dying ministry” and “Wonderful coverage of a couple making a difference for a group often ignored. Piece is nicely segmented and well written.” The honor is the 17th CPA award for Gonzalez, who will mark two decades with the paper in August.

To review the two award-wining stories, visit thefloridacatholic.org and click on “Faith Around the State.”