Francis Convokes a Conference in the Vatican on Haiti, Five Years after the Earthquake

“The communion of the Church: memory and hope for Haiti five years after the earthquake” is the title of the conference beginning this morning in the Vatican.  Picture: Church pews are seen amid rubble in the destroyed Sacred Heart Church after the 2010 earthquake in the Turgeau neighborhood of Port-au-Prince, Haiti. (CNS/Bob Roller) 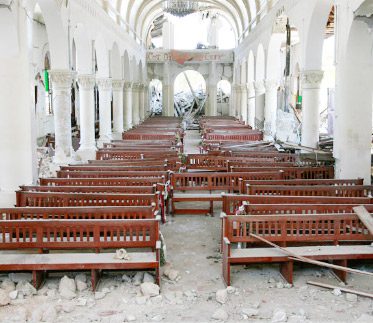 The communion of the Church: memory and hope for Haiti five years after the earthquake” is the title of the conference beginning this morning in the Vatican. The event was organized by the Pontifical Council “Cor Unum” and the Pontifical Commission for Latin America in collaboration with the bishops of Haiti, and is a response to the Holy Father’s wish to maintain close attention to a country that continues to suffer the consequences of the earthquake, and to reiterate the Church’s closeness to the Haitian people during the reconstruction phase. It will above all offer the opportunity to present the balance of aid destined for the country and to analyze the results of the implementation of the projects carried out from 2010 to the present day.

Picture: Church pews are seen amid rubble in the destroyed Sacred Heart Church after the 2010 earthquake in the Turgeau neighborhood of Port-au-Prince, Haiti. (CNS/Bob Roller)

In January 2010 the island of Haiti was afflicted by an earthquake, the epicenter of which was located near the capital, Port-au-Prince, causing the death of 230 thousand people and devastated the territory, destroying much of the infrastructure, thousands of homes, and all the hospitals on the island. According to Red Cross estimates, the disaster affected three million people.

The meeting is attended by representatives of the Holy See, the local Haitian church, and various episcopal conferences, workers from Catholic charitable organizations, religious congregations and various Holy See-accredited diplomatic representatives. The conference will begin at 9 a.m. in the St. Pius X building with greetings from Cardinal Marc Ouellet, P.S.S., president of the Pontifical Commission for Latin America, and a report from Cardinal Robert Sarah who, as president of “Cor Unum” until the end of 2014, managed the Holy Father’s donations to the local Church of the island. During the morning session, there will be a debate on the material and spiritual reconstruction process and there will be interventions by Cardinal Chibly Langlois, bishop of Les Cayes and president of the Episcopal Conference of Haiti, Archbishop Thomas Gerald Wenski of Miami, U.S.A., Alberto Piatti, president of the AVSI (Association of Volunteers in International Service) Foundation, engaged in a charitable works on the island, and Eduardo Marques de Almeida, former representative of the Inter-American Development Bank in Haiti. At 11.30 a.m. the delegates present will be received in audience by Pope Francis.

In the afternoon, there will be presentations by those who work in the context of reconstruction, to enable an exchange of experiences regarding the issue of international cooperation and the priorities and criteria for future action. At the end of the meeting, Msgr. Giampietro Dal Toso, secretary of “Cor Unum”, will give an overview of the problems that still remain to be resolved.

The conference will end with a Mass celebrated by Cardinal Secretary of State Pietro Parolin in the church of Santa Maria in Traspontina, at 6.30 p.m.