The parishioners at St. Theresa Catholic Church in Belleview waited decades for this moment. On Sunday, Nov. 30, nearly 400 parishioners and clergy gathered under sunny skies and the cloak of live oak trees to watch Father David Vivero, pastor, turn over the first spade of dirt, marking the future site of a new and larger church for the people of St. Theresa. 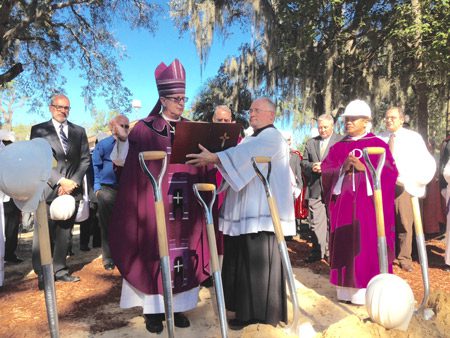 The parishioners at St. Theresa Catholic Church in Belleview waited decades for this moment.

On Sunday, Nov. 30, nearly 400 parishioners and clergy gathered under sunny skies and the cloak of live oak trees to watch Father David Vivero, pastor, turn over the first spade of dirt, marking the future site of a new and larger church for the people of St. Theresa.

“The Church is built by Christ; we have God’s hands guiding our construction,” Father Vivero announced, after blessing the site with holy water.

The groundbreaking ceremony began with Mass, celebrated by Bishop John Noonan. In his homily, Bishop Noonan thanked parishioners for their perseverance, comparing their foresight and patience to that of their patroness, St. Therese of Lisieux, who waited for years to fulfill her dream of becoming a nun.

“You too were asked to dream, and here’s your dream,” Bishop Noonan said. “With great strength and sacrifice you have decided to prepare the way for future generations, so they might find holiness.”

The design plans call for a 10,000 square feet building with a seating capacity of 500, which is an expansion over the existing church, which accommodates only 320. The parish currently includes more than 1,000 registered families.

Longtime parishioner Tom Equels, who helped support the project financially, said the additional space will be a welcome blessing for the parish.

“At my age, having a seat is a real pleasure,” he joked. “Right now we’re at standing room only. The new church will still be simple, still be humble, but with a little more space.”

That simplicity and sense of humility has been attracting families to St. Theresa since its founding in 1947 as a mission of Blessed Trinity Catholic Church in Ocala. Back then only one weekly Mass was celebrated; today, St. Theresa offers ten Masses each week, one each weekday and five on the weekend.

“We have such a beautiful congregation, with volunteers who are very active in the neighborhood. It is a real example of what a parish should be,” continued Equals.

Archbishop Joseph Hurley, former Bishop of St. Augustine, elevated St. Theresa to the status of a parish in 1966, but the actual church building dates back to 1951, when St. Theresa was still a young mission.

A modest expansion in 1976 increased the seating capacity from 150 to 320, but overcrowding has remained a challenge. Many families must stand throughout Mass, making worship difficult for the growing number of parishioners who are over the age of 65.

The lack of space, combined with a projected surge in nearby housing developments and retirement communities, fueled the decision to build a larger church on the parish’s 10 acre property off Highway 301 in Belleview.

The long journey was fraught with obstacles, including frequent setbacks with funding and permitting.

To move the project forward, in 2008 St. Theresa Catholic Church participated alongside nine other parishes in the first wave of the diocesan-wide Alive in Christ Capital and Endowment Campaign. Parishioners pledged just under $1.6 million to support the construction. Proceeds from the parish building fund and a savings account will cover the remaining cost.

Construction on the new church is projected to begin in late January.

“This was a difficult dream,” Bishop Noonan told parishioners. “It was not an easy task, but now you are in the final stage. Like St. Therese, you are planting seeds. You are planting a new home.”