Handing On the Faith to the Next Generation 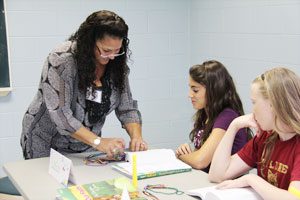 Wittmer has been a catechist for 12 years.

“I feel the more you get involved, especially with the youth, the more our Catholic faith is going to be developed,” said Wittmer. “I am hoping through my presence that the older children will want to share their faith as well and teach the younger children. It is a small mission that I do in doing God’s work, in following in Jesus’ footsteps.”

The word catechist comes from a Greek word that means “to echo or resound the faith,” said Dennis Johnson, Jr., secretary for evangelization and family life for the Diocese of Orlando.

“What I like to say to our catechists is if we think of our task as Christians is to bring the Gospel to others by the way we live and by the way we model our faith, then a catechist is someone who does that a step above other Christians, and they do that by echoing the Gospel and echoing Jesus,” Johnson said, adding that catechists are one of the few roles defined in Church Law for lay people in the Church.

“It is something to take seriously,” Johnson said. “Folks who are catechists should be good Catholics, not necessarily a perfect Catholic, and should be committed to their faith and willing to do some training so that they can do what a catechist does, which is facilitate someone else’s faith journey along with their own.”

There are over 1,100 catechists in the Diocese of Orlando. They are encouraged to continually learn about their faith so they can better teach the faith. In addition to participating in parish missions and other educational opportunities at the parish level, Johnson said catechists are urged to take advantage of offerings at the diocesan level, including Faith Formation Day and other conferences, the Diocesan Catechist Certification Program (DCCP), which offers daylong seminar courses, and the University of Dayton’s Virtual Learning Community for Faith Formation (VLCFF), an online adult religious education and faith formation program. The Diocese of Orlando is also hosting the National Catholic Education Association Conference April 7-9, 2015 at the Orange County Convention Center in Orlando. The NCEA Convention and Expo is the largest private education association gathering in the nation. Those participating represent all aspects of Catholic and faith based education from preschool, elementary, secondary, adult education, colleges and universities, to local parish priests, catechists, and parish volunteers.

“We want to encourage a culture of ongoing formation,” Johnson said. “We do this as an incentive to try to insure our culture of faith permeates our lives at every level, and catechists are the first and in many ways one of the most critical elements of that faith journey.”

He added that often people think of catechists as teaching only children, but that is not what the Church intends. Faith formation is a lifelong process and we need to be more aware of mature discipleship.

“First and foremost, our priority needs to center around adults with the idea that if we focus on the adults, the faith trickles down and then grows up through the family,” Johnson said. “That is important especially this year as we go into the Synod of the Family and the World Meeting of Families in 2015.”

Johnson concluded, noting the words of Cardinal Daniel DiNardo, archbishop of the Diocese of Galveston-Houston, who, when speaking to a group of catechists, said: “You bring Christ to places where I, as your archbishop, cannot go. You bring the face of Christ to people that I always cannot see and for that I say thank you.”

Bishop John Noonan also recognizes the important role catechists have in the life of the universal Church, the parish community and each family.

“We can’t deny that everybody needs to grow in their faith,” said Bishop John Noonan. “Pope Francis is constantly calling us to a relationship with Christ, to open our hearts to Christ. Embracing him is the most important part of our faith, but we also need to know him. We need to study, and learn and grow in our faith, and catechists help us do that.”

Editor’s Note:  On September 21, as part of National Catechetical Sunday, parishes throughout the country gave special recognition to the men and women who give of themselves and share their faith as catechists.  On this day, Catechists were called forth and commissioned for their ministry.  The Catholic Church believes each person, by virtue of Baptism, in called to hand on the faith and be a witness to the Gospel. Catechetical Sunday is also an opportunity for all to rededicate themselves to this mission as a community of faith.