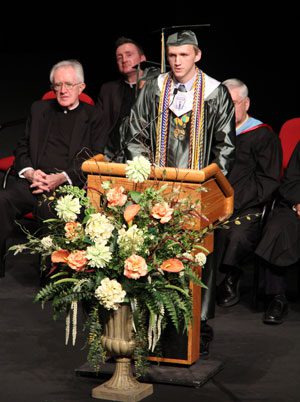 “It has been a great academic experience and I really enjoyed that you could keep the faith in school,” Lee said. “I have always kept God at the center of my studies and will continue to do so in my life.”

In order to pursue Catholic education at the high school level, Lee tolerated a daily two hour commute to and from school that sometimes stretched into four hours when he took a bus from his home in Scottsmoor to Melbourne.

Susan Riebsame, guidance director, said that while the distance did impact his academic and extracurricular activities, it did not slow Stefan down.

“He learned to utilize every opportunity to study, while traveling home many evenings in the dark following a long academic day and an extracurricular activity,” she said in a letter.

Like many of the 612 Catholic high school graduates from the Diocese of Orlando, Lee exemplifies the very person our Catholic schools strive to present to the world – a well-educated individual who integrates his/her faith, moral leadership and compassionate service in order to create a better world.

During his four years of high school, Lee, who is a valedictorian in his class with a 4.53 weighted grade point average, received a host of accolades for his academic achievements, leadership roles, extracurricular activities, sports participation, and more than 1,000 hours of community service.

Still, amid his notable achievements, Lee stands out among his peers because of his deep faith and perseverance in the face of adversity.

“When I first came to school here, I knew no one,” Lee said, during his commencement address. “Coming from St. Teresa all the way in Titusville, I was the only person to go to MCC from my middle school since my sister a few years before.

“I remember the first day of freshmen orientation,” he continued. “I sat in the back of the bleachers, closed my eyes and tried to fall asleep. My goal during orientation was to keep my head down and try not to talk to anyone. That lasted about 30 seconds before I was bombarded with questions (from my peers). To be accepted like that immediately upon my arrival made me feel good.”

During his sophomore year, Stefan and his family faced another obstacle centered on his father’s employment at Kennedy Space Center. With multiple cuts being phased in, his family was under constant stress wondering when his father was going to be laid off. And then, the unimaginable happened during his junior year. His father died unexpectedly.

Stefan said it was during this time that he most needed his heavenly Father.

“I grew in a deeper understanding with God especially when faced with mortality,” the teen said. “My faith was strengthened considerably. It helped me to cope with everything.”

This fall, Lee will embark on the next phase of his life – a full scholarship to Princeton University where he plans to study political science in his pursuit of becoming a lawyer.