As they prepared for the birth of Christ during the Advent Season, parishioners at Immaculate Conception Parish had an afternoon of Christmas festivities on Sunday, Dec. 7th: a Christmas concert followed by a live nativity, and refreshments provided by the Women’s Guild. 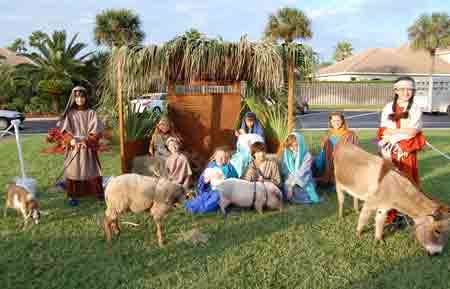 The concert, directed and organized by Gretchen Lux and Betsy Stansifer, presented a “Christmas Around the World” theme, featuring the combined choirs of Advent Lutheran Church and Immaculate Conception Catholic Church. It consisted of traditional songs from different countries, performed by an adult choir, children’s choir, and a variety of instruments.

“I really liked being in the children’s choir, and will definitely do it next year,” said Christopher, a first-time choir participant.

The church also hosted a live manger scene, complete with a donkey, sheep, goats, pig, chicken, and a rabbit. Mary, Joseph, and shepherds tending to the animals were all played by ICC kids. The animals were brought by Cox Farm, a local animal rescue and sanctuary. Visitors not only got a chance to interact with these animals, but were also able to reflect on the birth of Jesus.

“We’re visiting from up north and have never seen a live nativity before. It’s so neat to be able to take in the whole scene,” said Charlotte Broome.

Parishioners and participants are looking forward to the event next year, and are hoping for even more patrons with whom to share the Lord’s Good News.