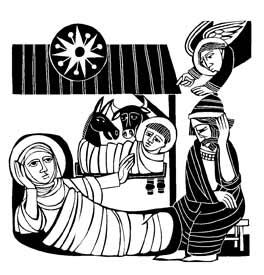 Pope Benedict XVI dedicated his catechesis during a general audience this week to the meaning of the word Incarnation, “a term,” the Pope said, “that has resounded many times in our Churches over these past days, expressing the reality that we celebrate at Christmas: the Son of God become man, as we say in the Creed.” 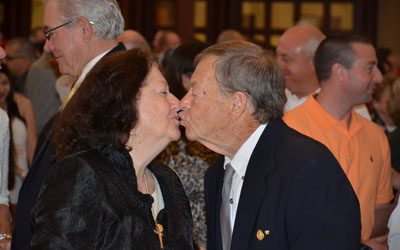 Pope Benedict XVI dedicated his catechesis during a general audience this week to the meaning of the word Incarnation, “a term,” the Pope said, “that has resounded many times in our Churches over these past days, expressing the reality that we celebrate at Christmas: the Son of God become man, as we say in the Creed.”

The Holy Father began by explaining the meaning of this word, which is central to the Christian faith, starting from the Church Fathers, especially St. Ignatius of Antioch and St. Irenaeus, who used it when “reflecting on the Prologue of St. John’s Gospel, particularly in the expression, ‘the Word became flesh’. Here the word ‘flesh’,” the Pope emphasized, “refers to the person in their entirety, precisely in light of their transcience and temporality, their poverty and contingency. This tells us that the salvation wrought by God made flesh in Jesus of Nazareth reaches the human person in their concrete reality and in whatever situation they may find themselves. God took on the human condition in order to heal it of everything that separates it from Him, in order to allow us to call Him, in his Only Begotten Son, by the name of ‘Abba, Father’, and to truly be children of God.”

Then the Pope recalled the Christmas tradition of exchanging gifts with those closest to us. Sometimes this may be a gesture undertaken out of convention but, generally, it “expresses affection. It is a sign of love and esteem.” This same idea of giving is at the heart of the liturgy of these feastdays and “it reminds us of the original gift of Christmas. On that holy night, God, becoming man, wanted to make himself a gift for humanity … he took on our humanity in order to give us His divinity. This is the great gift. … In this we find the model of our giving because our relationships, especially those which are most important, are guided by generosity and love.”

The fact of the Incarnation, of God who makes himself man like us, shows us “the unprecedented reality of divine love. God’s action, in fact, is not limited to words. Rather, we can say that He is not satisfied with speaking but immerses himself in our history and takes upon himself the worry and the weight of human life. … God’s way of acting is a strong stimulus for us to ask ourselves about the reality of our faith, which should not be limited to the arena of feeling, of the emotions, but must enter into the concrete reality of our existence, must touch, that is, our everyday life and orient it in a practical way. … Faith has a fundamental aspect that affects not only our mind and our heart but all of our life.”

Citing the Church Fathers again, the Pope observed that on numerous occasions Jesus was compared with Adam, even to the point of calling Him the “second Adam”, or the definitive Adam, the perfect image of God. With the Incarnation of the Son of God a new creation occurs, which gives a complete answer to the question ‘who is man?’ … Only in Jesus is God’s plan for human being fully revealed: He is the definitive man according to God.”

“It is important, therefore, that we rediscover our wonder at this mystery, that we let ourselves be enveloped by the grandeur of this event: God walked our paths as man. He entered into human history to give us His very life. And he did this not with the splendour of a sovereign, subjugating the world with his power, but with the humility of a child.”

“In that child, the Son of God whom we contemplate at Christmastime,” Benedict XVI concluded, “we can recognize the true face of the human being, and only in opening ourselves to the action of His grace and seeking every day to follow Him do we carry out God’s plan for us.”