Sister Serves In a Unique Way 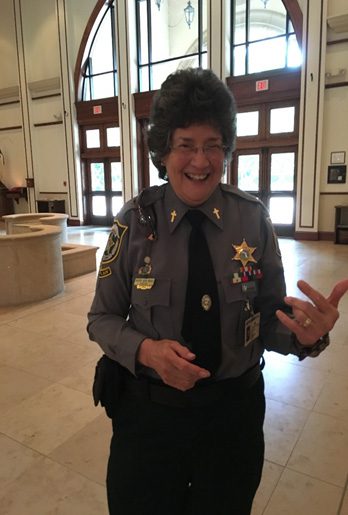 Sister Jean Riggs, of the Sisters for Christian Communities (SFCC), works as a Chaplain of Orange County Sheriff’s office, where she has helped Orange County communities in many different ways.

Sister Jean was a nun before becoming a Chaplain. She became a Chaplain because she felt it was what God was calling her to do. She said, “It is a special way of serving God, by bringing faith and love to those whom I serve and serving the community of cities in Orange County.” With this statement, it is obvious that she is a loving, compassionate person who has dedicated her life to helping others. In fact she was a first responder called out to minister to the victims of the second largest terrorist attack in U.S. history since 9/11, Pulse Nightclub.

The breadth of Sister Jean’s ministry reaches people of all different faith backgrounds in the community, including families of suicide victims and drowning accidents, officers that have been shot, brain injuries, and baptisms of dying children. When asked about her most memorable experience, this is what she had to say: “Not too long ago I was present when two different police officers gave birth. The first to give birth was an officer from Orange County. Her baby was born perfectly healthy and strong. However, the second to give birth, a sheriff’s dispatcher, had a stillborn baby.” The mother of the still-born may have questioned God in her time of need, but Sister Jean comforted her, helping her understand that this had happened for a reason.

She has been asked why she would pray for criminals when they have wronged God. Her reply, “God loves all of us. We must always keep that in mind because there is always a chance of redemption.” She explained that no matter what, there is always a way to be led back to God. When asked why she continues to be a Chaplain she says, “It’s the feeling I get when I go home at night—that I have given my best to love my God and the people I encounter.”

Sister Jean shared how in one neighborhood there was a fight that got out of hand between two families. It began because one family accused another one of theft. The family that was accused tried to drive away in their van. About 100 people began throwing bricks and rocks at their car. One woman, who was pregnant and was also jeering, accidentally got hit by the van as the accused family was trying to escape. The woman was sent flying back into a ditch and Sister Jean fearlessly went into the ditch after her while the other officers attended to the mob. She calmed the women down and said prayers over her. When the ambulance arrived and tended to the woman, Sister Jean bravely walked through the crowd trying to calm them down. The crowd didn’t calm down completely, but the situation did not get any worse.

As a Chaplain, Sister Jean also takes care of the spiritual needs of Orange County officers and deputies, talking with these individuals after a tragedy, fight, or a critical incident such as a car crash. Like some sisters who are assigned posts, Sister Jean wanted to become a Chaplain. She saw a need for her to help so she was interviewed by other Chaplains and board directors. Sister Jean has protected us, prayed for us in times of need, and has been the hero we all need. Thank you so much Sister Jean.