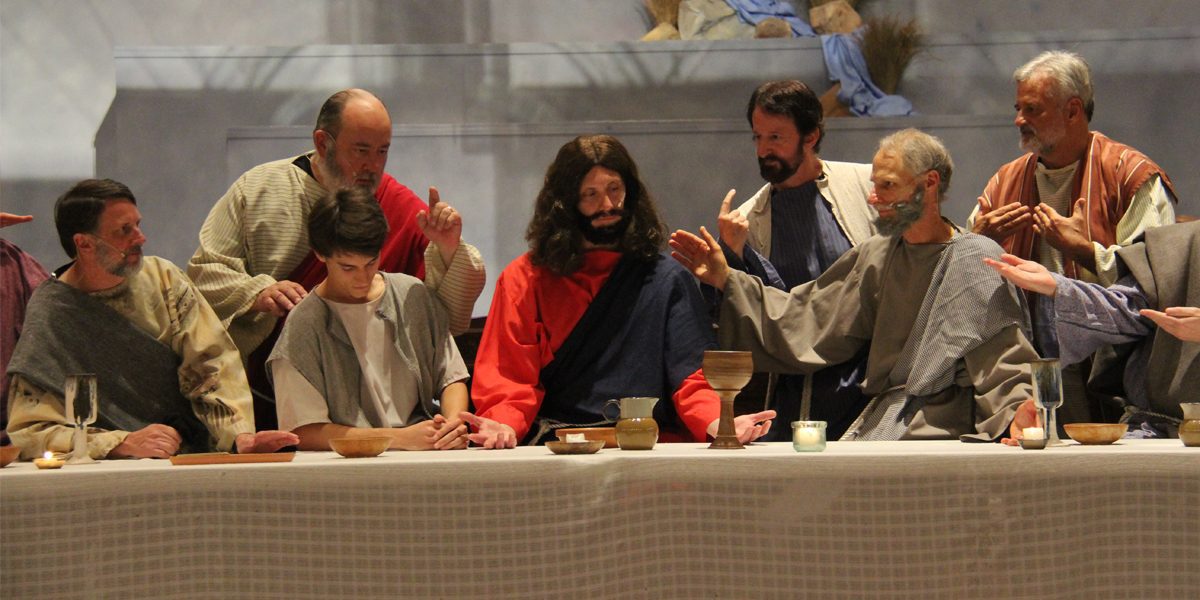 Jesus’ last moments with the apostles came to life Friday, March 27 at St. Stephen Parish during the hour-long, theatrical adaptation of Ernest Emurian’s, “The Living Last Supper.” Set in the Upper Room on the eve of the Passover, the production is centered on Leonardo DaVinci’s famous painting, “The Last Supper.”

The production opens with Jesus, played by parishioner Jeff Bowman, washing the feet of the apostles and continues through the Last Supper, when he breaks the bread and blesses the wine, saying, “This is my Body. This is my Blood.” He also tells the audience that someone was about to betray him.

One-by-one, the apostles, also portrayed by parishioners, step away from the table to speak to the audience and question, “Is it I (who would betray Jesus)?” During their brief monologues, they shared who they were, how they were called to follow Jesus and what serving him meant to them.

For example, Andrew, the brother of Simon Peter, played by Larry Magilligan, said, “I am not a gifted man, just an ordinary man like any one of you. But I have done what I could to serve the master with the gifts and talents that I had”

“He must have seen something of value in me that the others overlooked because he selected me to be one of the 12 apostles,” he continued. “I have been a friend and companion to my Lord.”

“This event brings a visual awareness of what actually happened in a very real way,” he said. “We have people from all different faiths here who are in awe of this whole production. It is a wonderful learning experience for all of us.”

This is the 10th year St. Stephen parishioners have presented the “Living Last Supper.” Behind the scenes were directors Marty and Vicki Wicks, who have overseen the production for the past five years. Many of the actors returned from previous years’ performances, with open roles being filled by men suggested by other parishioners. Rehearsals began the first week of February.

“Each year I begin the rehearsal process by asking each ‘apostle’, ‘Why would you drop everything and follow this man? After all, there were no ad agencies promoting Jesus as the Son of God, nor were there any spin doctors touting his miracles or teachings,” Vicki said. “I tell the men that there is no right or wrong answer to this question; I will see their answers in their performances.”

“The fascinating thing is how each member of this cast has come to relate to and own the part he plays,” she continued. “The impact of involvement with this piece goes beyond any rehearsal or performance and has begun to affect each of their lives. The actors bring amazing things to each character, making them very human, very relatable.”

Bowman can attest to that.

“It was difficult at first,” he said. “I can’t imagine a bigger role. However, as rehearsals continued, the role started to take an effect on me. I was at peace tonight. It was a pure blessing.”

The performance had an impact on the audience as well. As they walked out of the church, the people talked about what the performance meant to them.

“It is moving,” said parishioner Rosalie Beckman, after seeing the drama for the second time. “It doesn’t matter if you have seen it one time or seven times, or 70 times. It is so moving. The tears just flowed from within and when they are flowing, you know you are being touched by the Spirit. The Spirit of God was definitely here tonight.”