Deacon John Rumplasch was 19 years old when his mother passed away. “When my mother passed away, I was angry and I blamed Jesus for her death. I only had a small faith, but it diminished quite a bit,” said Rumplasch, who was baptized Methodist but raised in the Presbyterian Church in New Jersey. 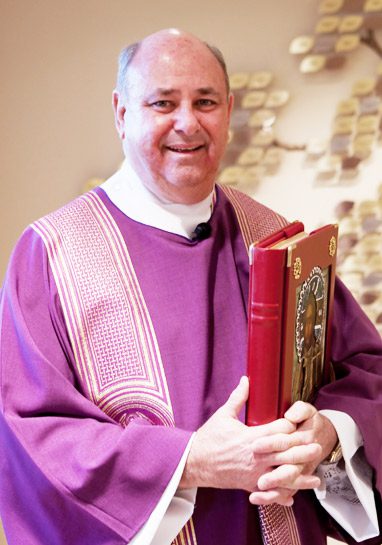 Deacon John Rumplasch was 19 years old when his mother passed away.

“When my mother passed away, I was angry and I blamed Jesus for her death. I only had a small faith, but it diminished quite a bit,” said Rumplasch, who was baptized Methodist but raised in the Presbyterian Church in New Jersey.

Because of his mother’s untimely death, Rumplasch had to leave school and work three jobs in order to help support his family. He joined the Navy, but two years later — his military service cut short – returned home when his father was injured. It was during this time that he married his wife, Michelle.

“She’s a cradle Catholic but she never pushed her religion on me,” Rumplasch said. “I did not go to Mass with her. She went to Mass.
“I helped build the parish that she belonged to, so I had nothing against building the church,” he added. “I just didn’t attend. I said I was Presbyterian, but I really didn’t have a religious faith.”

Then, during Christmas Eve Midnight Mass in 1995, his life began to change.

“I attended a midnight Mass at St. Justin Catholic Church and a light inside me lit up and I broke down,” Rumplasch said.

The following year, the family moved to South Florida and began participating in the celebration of Mass. One day after Mass, a deacon made an announcement that forever changed Rumplasch’s life.

“He got up on the sanctuary and talked about the process for becoming Catholic,” Deacon Rumplasch said. “I told Michelle, ‘I’m going to go to that.’”
He began his preparation to be received into full communion with the Catholic Church.

Deacon Rumplasch was confirmed in 1997 and started getting more involved in his parish. Several years later, he began to feel the call to the diaconate.

“I kept it to myself for about three months,” he said. “I went to see the pastor six times. I would drive in the driveway, go through the parking lot, and out the other driveway.

The sixth time I stopped and spoke with him, and he said he would support me.”

Deacon Rumplasch started with diaconate formation in 2005 and was ordained in 2009 on the Feast of St. Anthony.

He feels his unique journey of faith prepared him for the opportunity to assist Deacon David Gray in the Diaconate Formation Program of the Diocese of Orlando.  He considers the diocese’s program exceptional in that it offers a mixture of classes.

“We took the intense education and combined what we call dimensional classes of spirituality, human dimension, more academic, pastoral and diaconate,” he said. “It offers a well-rounded effect of the candidate in formation”

In addition to his ministry to the diocese, Deacon Rumplasch also serves at St. Mark the Evangelist Catholic Church in Summerfield, where he oversees the Extraordinary Ministers of Holy Communion, altar servers, ushers, and lectors, among other ministries.

“My goal as a deacon is to help and serve others,” he said. “I look forward to expressing my feelings to others and bringing others into a fullness of faith and belief, closer to God and Jesus Christ, and the Holy Spirit.”