Local Pilgrims Set Out to Honor the Blessed Mother

Tears began to well in the eyes of Vee Bates as she listened to Bishop John Noonan speak of the Blessed Mother’s love and devotion to her son, Jesus. Bates, a parishioner of Immaculate Conception Catholic Church in Melbourne Beach, was among 150 pilgrims from the Diocese of Orlando, who traveled by bus to join Bishop Noonan for a one-day Marian Pilgrimage on Aug. 31. 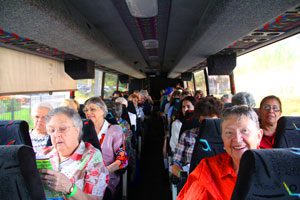 Tears began to well in the eyes of Vee Bates as she listened to Bishop John Noonan speak of the Blessed Mother’s love and devotion to her son, Jesus. Bates, a parishioner of Immaculate Conception Catholic Church in Melbourne Beach, was among 150 pilgrims from the Diocese of Orlando, who traveled by bus to join Bishop Noonan for a one-day Marian Pilgrimage on Aug. 31.

The pilgrims visited the Shrine of Our Lady of La Leche, the first shrine dedicated to the Blessed Mother in the United States, located on the peaceful grounds of the Mission of Nombre de Dios in St. Augustine. The pilgrimage included the celebration of Mass, reflections, prayer and self-guided tours of religious sites within the city.

“Mary is a powerful example to us,” Bishop Noonan said. “So often, we look to the Scriptures and look at the disciples, and think aren’t they wonderful. But Mary is the true disciple, a real disciple. She didn’t say much, but she brought everybody to her son.”

“That is the powerful thing about Mary,” he continued. “She is not one of the evangelists, she did not write the Gospels, but she was there. And she was able to reveal her son to people through her trust and love for him. Our trip to St. Augustine was to remind us that it wasn’t just the physical caring Mary gave her son, but it was also that silent witness of belief and trust in the word of God.” 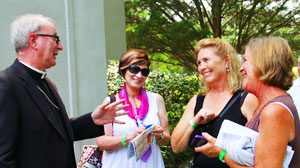 The pilgrimage opened with the celebration of Mass at the Mission, during which Bishop Noonan offered a brief history of the beginning of the Catholic Church in the New World nearly 500 years ago. He also spoke of the celebration of the first Mass in America, which was on Sept. 8, the day of Mary’s birth. Bishop Noonan also spoke of the early settlers’ devotion to the Blessed Mother, especially as they faced the potential difficulties of pregnancy and childbirth.

“It is with joy and gratitude that we come here today to celebrate the bravery of those men and those women who came to America out of love of God, and to honor the inspiration of Mary, the Mother of God, as she gave them hope and courage,” Bishop Noonan said. “We come here today to give thanks to God and to pray to Mary that she will continue to lead and guide us.”

Most of the pilgrims lingered on the Mission grounds, prayerfully visiting the sites, such as the statue of Father Lopez and the Great Cross which rises 208 feet into the air and marks the site where the first Mass was celebrated. Pilgrims also prayed at the Shrine of Our Lady of La Leche before making their way into town to tour the Cathedral Basilica of St. Augustine. After lunch, pilgrims gathered at the Sisters of St. Joseph Motherhouse to learn the history of the religious community.

“I love the Blessed Mother, and this pilgrimage offered me a chance to honor her,” said Mary Ann Crawford, a parishioner at Sts. Peter and Paul Catholic Church in Winter Park, reflecting on her journey that day. “It has been beautiful. The shrine is beautiful and the Mass inspiring. It is a blessing to be able to come with the bishop.”

“As I have gotten older, my faith life has grown stronger,” said Temple Hughes of St. Joseph Catholic Church in Palm Bay. Certainly being around others who believe as I do today, hearing the music, and the whole beauty of this event has been wonderful.”