Before a small group of Diocese of Orlando seminarians reached the steps of the Basilica of the National Shrine of the Immaculate Conception in Washington D.C. for the Canonization Mass of Junipero Serra a homeless man approached them. Pictured: From left to right: Ryan Saunders (Miami), Tom Pringle (Orlando), Caleb Harkleroad (Savannah), Ted Gentil (Miami) and Michael Scaramuzzo (Venice). 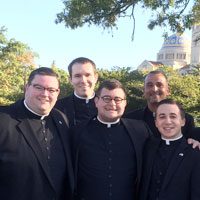 Before a small group of Diocese of Orlando seminarians reached the steps of the Basilica of the National Shrine of the Immaculate Conception in Washington D.C. for the Canonization Mass of Junipero Serra a homeless man approached them. All he wanted was a conversation. The six seminarians, dressed in clerical attire, decided to take a moment and practice what the pope teaches us daily: humility.

“Pope Francis is authentically living the Gospel and is inviting us to do the same. All of us are called to be authentic witnesses to the love and compassion of Christ,” said seminarian Tom Pringle, St. Vincent de Paul Regional Seminary. “The Lord was giving us the opportunity to be those authentic witnesses of the Gospel. None of us hesitated to recognize the presence of Christ in this gentleman. That’s what being a Christian is all about; encountering Christ in the other.”

More than 1,000 seminarians, novices, priests, sisters and brothers from across the U.S. gathered inside the largest Roman Catholic Church in the U.S., anxiously awaiting Pope Francis’ arrival. One hundred and fifty seminarians from St. Vincent de Paul Regional Seminary and St. John Vianney College Seminary also stood among the crowd. Seminarian Ricardo Salgado from St. Vincent describes it as a reunion between families.

“When you see all these people from across the country reunite, it is such an emotional reunion and a privilege to meet Pope Francis with my brothers and sisters in Christ,” Salgado remembers. “Seeing the crowds gathered, religious sisters with different habit styles and colors, everyone looked so beautiful. It’s also inspiring to see other young people like myself who want to make a commitment to the Church.”

With only one word, Pringle described the moment Pope Francis walked inside the basilica: electric. Salgado further described the pope’s visit as a guiding light illuminating the entire church. As the pope approached their pews, Salgado and several other seminarians chanted a rhyme in Spanish saying, “Papa Francisco bendice a tus hijos,” which means, “Pope Francis bless your children.” What happened next shocked every seminarian including Salgado.

“Pope Francis made the secret service, bishops and cardinals walking with him stop,” Salgado remembers. “He turned to face us smiling and said, ‘Do you want me to bless you?’ We went insane shouting yes! He gave us the blessing and for the rest of the Mass most of us remained shocked.”

“I remember standing in Rome for the canonizations and it was this awesome moment where you can feel the Holy Spirit all around you and I got that same incredible feeling at the basilica,” said Pringle. “You can very much feel the presence of the Holy Spirit and to experience the presence of the saints and the apostles in this kind of way it was completely humbling.”

Another humbling experience the seminarians encountered is the amount of people who greeted them throughout their trip.

“While walking through the airports, many people reached out to us with such high hopes for the future of the Church,” said Salgado. “It’s such a gift from God that I was able to not go as myself, but to have the opportunity to put on the identity of Christ, and be Christ for others in this pilgrimage.”

Regardless of age, class or religion, Pope Francis continued to be the “People’s Pope” while visiting America. He is a beacon to millions of all faiths.